'Time is of the essence, and the status quo cannot continue,' Montreal aerospace industry to prime minister 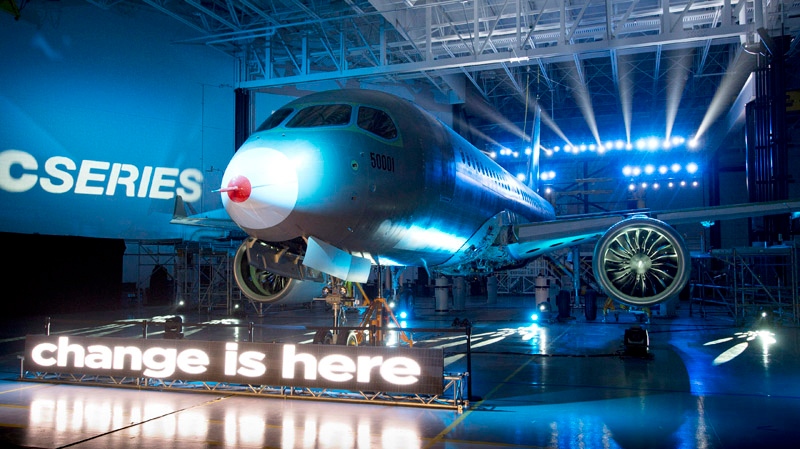 Bombardier unveils its CSeries flight test vehicle Thursday, March 7, 2013 in Mirabel, Que. Bombardier expect its first flight test by the end of June of this year. THE CANADIAN PRESS/Paul Chiasson

Mr. Trudeau, Ms. Freeland, don’t let an industry that has collectively taken us nearly a century to build, weaken.

Help us emerge stronger from the crisis!

Mr. Prime Minister, Ms. Deputy Prime Minister and Minister of Finance, the players in Québec’s aerospace cluster are addressing you today to alert you to the seriousness of the situation.

Time is of the essence, and the status quo cannot continue.

The aerospace industry has been hit hard by the COVID-19 crisis. Its activities have been significantly curtailed since the closing of borders.

This pandemic is affecting not only airlines but the entire supply chain, from aircraft manufacturers to original equipment manufacturers, integrators and maintenance, repair and overhaul companies, as well as small and medium-sized enterprises, academic institutions and aerospace research centres.

Since March, the vast majority of the world’s aircraft fleet has been grounded due to the dizzying drop in air traffic. Thousands of workers have been laid off, aircraft deliveries have been postponed or even cancelled, and hundreds of Canadian companies are struggling to survive.

In recent months, our industry has been working hard to come up with numerous measures that would enable the public to gradually resume air travel and, ultimately, allow for the safe reopening of borders, as other countries are doing.

A major pillar of our economy, our sector alone generates $31 billion in revenue and contributes $25 billion to the country’s GDP each year.

It employs more than 213,000 Canadians from coast to coast to coast and is composed of hundreds of small, medium and large businesses. More than 90 per cent of Canada’s aerospace manufacturing firms export 80 per cent of their production. Over $1 billion is invested in research and development each year by our sector, contributing to more than a quarter of total manufacturing research and development in Canada.

Targeted assistance is slow in coming.

We are seeing other countries around the world supporting their strategic sectors because they know that exporters of high-tech products will create jobs and wealth for their citizens.

The handful of nations with an aerospace industry are also taking costs and benefits into account and pursuing aggressive industrial policies to ensure the sector’s growth.

Much more so than Canada.

The federal government is already planning major projects related to the defence of our country. It would, therefore, be relevant to seize the opportunity provided by the current context to accelerate and anticipate these investments and thus help the aerospace supply chain.

At the same time, a review of defence procurement policies should be considered to further promote local industrial technological benefits, which the current system does not allow.

Countries such as the United States have demonstrated that they will continue to provide unwavering support to the defence sector, enabling the development of advanced technologies transferable to commercial aircraft.

France, for its part, has opted for innovation in the recovery by focusing on a zero-emission aircraft. No less than 1.5 billion euros in public aid over the next three years will be invested by the French government to support R&D and innovation in the sector over the long term.

Canada has the operational, technological assets and skilled workforce to position itself in a green recovery. The industry is ready to work on innovative solutions, electric or hybrid propulsion for all types of aircraft and, more generally, on Eco-Mobility in aviation. But it will definitely need the government as a strategic partner to stay in the race against other countries.

It is essential to invest now, as you recently did with the automotive sector, to halt the decline of our industry on the international stage.

Choosing not to support the aerospace industry will not be synonymous with preserving our economy.

Such a choice will mean pulling out of the race. How can Canada still compete if it does not position itself quickly in this race for innovation?

How can we, without the government as a partner, retain a highly-skilled workforce and prevent the ecosystem from crumbling?

By contributing to the aerospace industry’s development efforts, Canadians will be creating value and stimulating our economy.

They will be supporting an industry that will help Canada stand out in the years ahead.

The facts are clear: supporting our industry is a profitable investment for Canadian businesses, people, innovation and the environment.