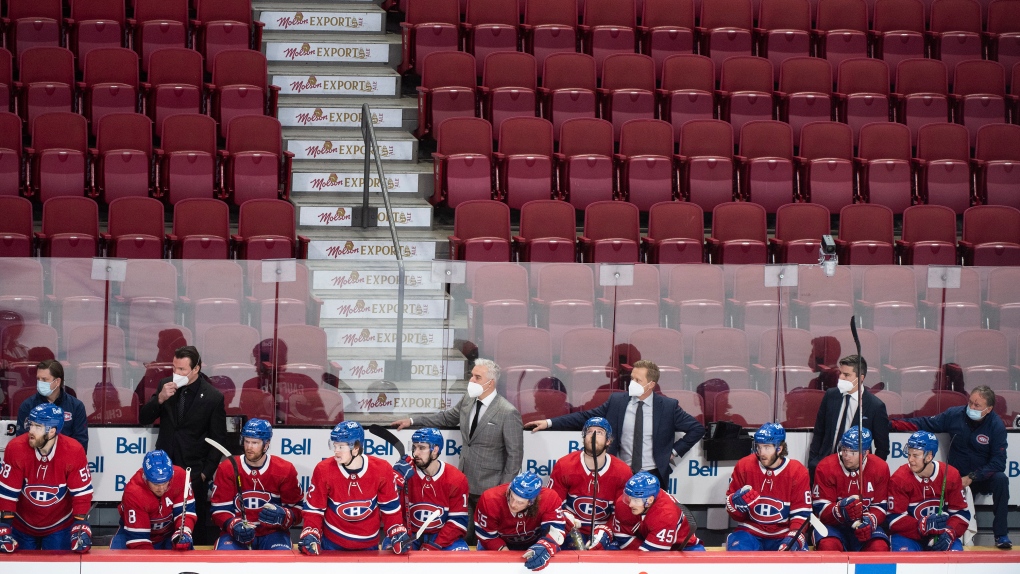 Montreal Canadiens players and coaching staff look on from the bench against a backdrop of empty seats during during second period NHL hockey action against the Philadelphia Flyers in Montreal, Thursday, December 16, 2021. THE CANADIAN PRESS/Graham Hughes

The Montreal Canadiens will play Thursday night's game in an empty arena, after ticket buyers were told to stay home.

The news comes amid a rapid increase in COVID-19 cases in Quebec and concerns about the Omicron variant.

"Faced with the spiraling rise of COVID-19 cases in the region, late this afternoon the Montreal Canadiens organization received a request from Quebec public health officials to host tonight's game against the Philadelphia Flyers in a closed setting with no fans in attendance at the Bell Centre," a news release read.

An update on the status of Saturday's scheduled game against the Boston Bruins will be provided on Friday, the team said.

A message to ticketholders that circulated on social media said they would be reimbursed for their tickets, and that holders of season's tickets would be returned the amount for the game in account credit.

Fans posting on Twitter had mixed reactions -- some said they were angry, but others said they understood the decision.

I really feel for anyone who shelled out big $$$$ for tickets and a hotel to tonight’s Habs game. That sucks big time. #GoHabsGo #Habs

Well it's a shame that no fans were allowed to the game. I flew from Edmonton to cheer my habs. Habs tickets for Philly and bruins games.I understand the health minister decision
GO HABS GO pic.twitter.com/tmUVUoqHGi

I had tickets to tonight’s game which were given to me by a true gentleman @adampete78 and I forwarded them to a family of 4 which was their son’s first Habs game, drove from Ottawa and last minute tell them no fans allowed tonight ? Thank you @francoislegault for ruining it

Habs executive France Margaret Bélanger later put out a fuller statement saying that the team is hoping for better news in January.

"Playing tonight’s game in a closed setting is obviously disappointing to our fans," she wrote, but the team agreed with the request in order to preserve everyone's health and security.

"We have obtained assurances that we will be able to wecome our fans to our January games at 50 per cent capacity," she wrote.

"There have been no reported cases of COVID-19 in our arena since the beginning of the pandemic," something that team managers are "proud" to have accomplished.

No spectators were allowed in the Bell Centre during the regular season last winter. Capacity then increased from 2,500, starting in Game 6 of the First Round Series against the Toronto Maple Leafs, to 3,500 spectators starting in the Stanley Cup semi-final against the Vegas Golden Knights.

The Habs' request to be able to play in front of 10,500 spectators in the grand final against the Tampa Bay Lightning was refused by health authorities.

The limit was also 7,500 spectators during the preseason games this fall, then the authorities gave the green light to fill the Bell Centre to capacity in time for the home opener on October 16.

The maximum capacity of the arena is 21,302 people.

U.S. authorities on Monday announced the discovery of a major drug smuggling tunnel -- running about the length of a six football fields -- from Mexico to a warehouse in an industrial area in the U.S.

Nestle is flying baby formula into America as shortage continues

Nestle is rushing baby formula into the United States via airfreight in a bid to ease a nationwide shortage that is unnerving parents around the country.