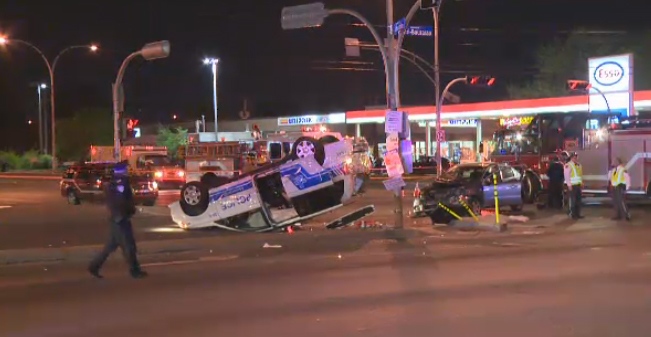 A police van is flipped after a crash at Henri-Bourassa and Lacordaire. Three people were injured.

Three people were injured Tuesday night in a collision between a Montreal police van and another vehicle in Montreal North.

The patrol van was driving on Henri-Bourassa Blvd. East. when it headed through the intersection at Lacordaire Blvd. with siren and lights flashing, responding to an emergency call.

A woman driving on Lacordaire Blvd. appears not to have heard or seen the patroller.

Her light was green, and her car hit the police van on the driver's side.

The woman and the two police officers were taken to hospital, but none of their injuries are life- threatening.

This is the second incident involving a police vehicle in as many days.