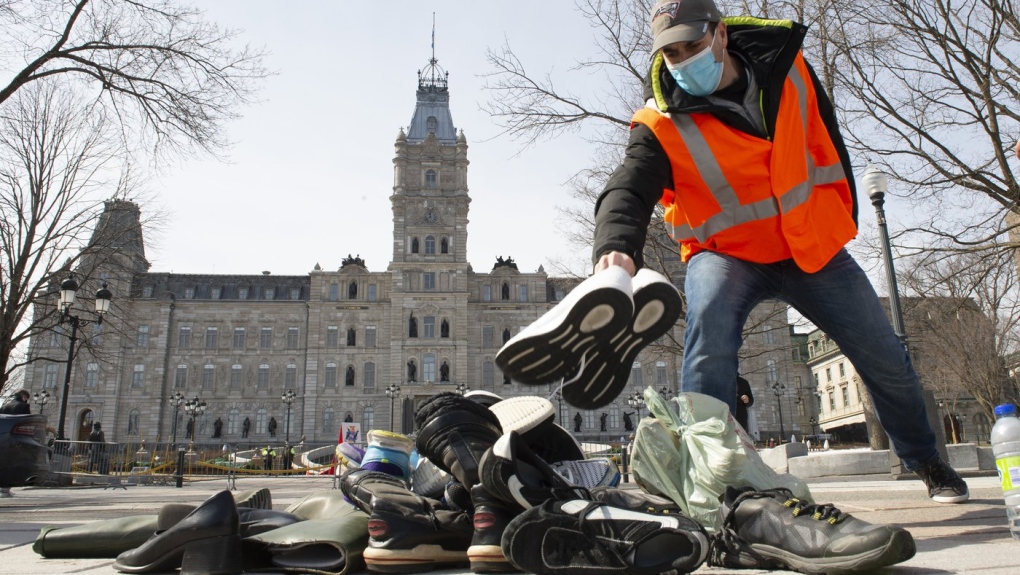 Workers at Quebec's institute of public health (INSPQ) will begin a three-day strike on Monday, Nov. 28. THE CANADIAN PRESS/Jacques Boissinot

Professionals at Quebec's public health institute, the INSPQ, began a three-day strike on Monday morning, demonstrating in Montreal and Quebec City, in front of the National Assembly.

They are 400 professionals: scientific advisers, information officers, computer analysts, among others, who are members of a union of the Centrale des syndicats du Québec (CSQ).

They chose to demonstrate in front of the National Assembly to be heard not only by the INSPQ, but also by ministers and all MNAs, explained Étienne Pigeon, president of the Syndicat des professionnels de la santé publique du Québec, in an interview Monday.

"I invite the decision-makers, the people from the opposition parties, to support us, if they want, to try to advance our cause. It is not our intention that the labour dispute continue. But the people, the professionals at the INSPQ, have had enough. We were good kids during the pandemic. Now it's time to make ourselves heard, and then to go and get the recognition we are entitled to," said Pigeon.

The main point of contention is pay.

Pigeon says his members are about 15 per cent behind their peers at the Institut national d'excellence en santé et en services sociaux (INESSS) who have similar duties.

The collective agreement expired on March 31, 2020, as it did for all government employees, before their employment contracts were renewed until March 2023, with subsequent salary increases. Pigeon reports that his members 'have had none of this' since.

Negotiations have not broken down; further sessions will be held on Tuesday, Wednesday and Thursday, Pigeon noted.

"Because this is the health sector, essential services are being provided during the strike, so as not to jeopardize the safety or health of the public. We're talking about 10 to 15 people who have been identified as having jobs that are perhaps a little more critical in these circumstances," Pigeon explained.

Their professional colleagues at the Quebec Public Health Laboratory, also members of a CSQ union, have already given themselves a strike mandate. However, they have not yet exercised it, unlike those at the INSPQ.

Asked to comment, the Treasury Board said that 'as in the case of other organizations outside the public service', it has 'given the INSPQ a negotiating mandate to enable it to negotiate fair agreements with all of its staff', said Treasury Board Secretariat spokesperson Anne-Hélène Couturier.

"It is hoped that it will do the same with the other unions representing its staff, within a reasonable timeframe," she added.

"Although the Treasury Board Secretariat is not present at the negotiating tables, the progress of the discussions is being followed very closely on our side," she assured.

This report by The Canadian Press was first published in French on Nov. 28, 2022.