'This win, it's for you': Minus head coach Claude Julien, Habs dominate Flyers

TORONTO -- Kirk Muller didn't have time to check his phone in the heat of the moment.

He was too busy leading the Canadiens to their most convincing victory in recent memory.

Moments after Friday's final buzzer, however, there was a message waiting from head coach Claude Julien as he recovers from a health scare.

From top to bottom, there's no doubt Montreal's roster put a smile on his face with a dominant performance.

Tomas Tatar and Jesperi Kotkaniemi scored twice, Carey Price made 30 saves for the seventh post-season shutout of his career, and the Canadiens thumped the Philadelphia Flyers 5-0 to even their first-round playoff series at one game apiece just over 24 hours after learning Julien had been rushed to hospital with chest pains. 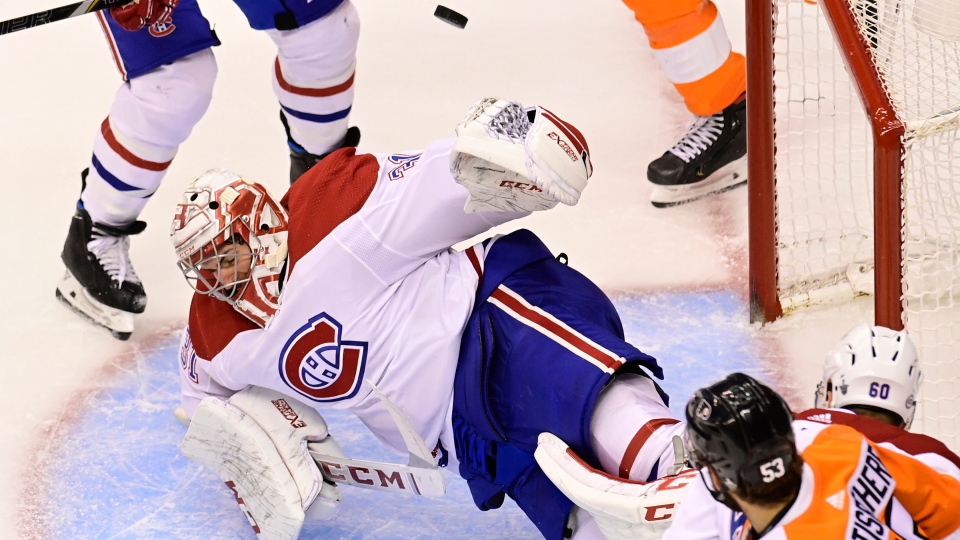 "He was one of the first guys that congratulated us," Muller, the team's associate coach who will be running the bench in the 60-year-old's absence, said of the text message he received from Julien.

Julien, who was admitted to hospital following the Canadiens' 2-1 loss in Game 1, had a stent installed in a coronary artery Thursday. The team said he would be returning home to Montreal to rest, adding that doctors expect a full recovery.

"Our thoughts and prayers are with Claude and his family," said Canadiens forward Max Domi, who had three assists for the first playoff points of his career. "We're just trying to stay focused here and get ready to go. We did a great job of that from the get-go."

Muller, who will be in charge for at least the rest of this series, made his playoff head coaching debut after leading Carolina Hurricanes for parts of three seasons from 2011 to 2014.

"The players know their roles, they know how we want to play," he said. "It was easy for me." 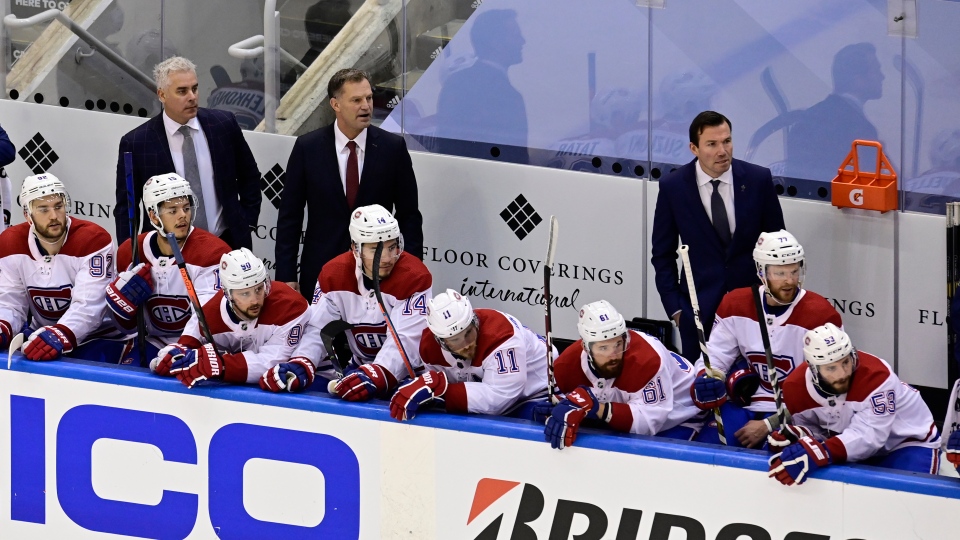 Montreal captain Shea Weber picked up the puck at the end of the game, but Muller had no doubt where it's heading.

"The puck really should go to Claude," Muller said. "I'm sure that's what they grabbed it for."

Joel Armia had the other goal for the Canadiens, who will look to take a surprising 2-1 lead in the best-of-seven series Sunday with their coach watching from afar.

"Claude steers the ship for us and he guides what we do," Montreal defenceman Ben Chiarot added. "We just play as hard as we can for him."

Carter Hart stopped 22 of 26 shots before getting pulled in favour of Brian Elliott, who finished with five saves for Philadelphia.

The Flyers were left seething by their showing, but also not happy with the fact Montreal ran its top power-play unit out late in the third period with the game out of reach.

"We had embarrassed ourselves enough," head coach Alain Vigneault said. "I don't think we needed to be embarrassed more.

"We're going to make sure our team is very aware of that."

Muller said he meant no disrespect, pointing instead to a man-advantage unit that was 0 for 12 in the qualifying round, but now 3 for 7 in two games against Philadelphia, needing as much work as it can get.

"I would never disrespect anybody, but we're in the playoffs," Muller said. "If this was during the season, it'd be a different story, but we have no practice time.

"I totally understand if those were his comments -- I was probably expecting it -- but my job is to make this team as good as it can be."

They looked great from the moment the puck was dropped for the 3 p.m. start Friday.

Tatar got things going with his first of the post-season 62 seconds in on a rebound before Montreal, which sat 18 points back of Philadelphia when the COVID-19 pandemic forced the suspension of the season five months ago, went up 2-0 at 12:36 when Kotkaniemi squeezed a Jonathan Drouin rebound through Hart. The goal was the 20-year-old former No. 3 overall pick's third after he scored just six times in the regular season.

"He's playing with a lot of confidence," said Domi, who moved up to play on a line with Kotkaniemi and Drouin. "He's starting to realize how big of a body he is, too, and how effective he is around the net.

"He's got some swag to his game right now."

The Flyers didn't record a shot until there was 3:36 left in the opening period on a power play, and didn't get their first shot at 5 on 5 until there were just over two minutes remaining. When the horn sounded, Montreal led 2-0 on the scoreboard, 16-6 on the shot clock and 34-16 in attempts on goal.

"Everyone contributed," Muller said. "That kept our pace going."

The 24th of 24 teams included in the NHL's resumption of play, the Canadiens shocked the Pittsburgh Penguins in the qualifying round, while the Flyers jumped up from fourth to the Eastern Conference's No. 1 seed in the round-robin portion of the restart.

Montreal no doubt expected a push from Philadelphia in the second, but a man advantage that stretched into the second saw the Canadiens go up 3-0 when Tatar used a Flyers defender as a screen and ripped his second off the post behind Hart at 1:25. The 29-year-old's two-goal showing was the second of his post-season career, but just the fifth and six times he's scored in 31 outings.

"It was nice to find the net," Tatar said. "It was an all-around team effort."

Philadelphia had a golden opportunity to get back in it with a 5-on-3 power play for 1:38 a couple minutes later, but Price, who blanked the Penguins in a decisive Game 4, smothered chance after chance, leading to couple of Flyers slamming their sticks in frustration.

Armia put things completely out of reach with 2:03 left in the second when his centring pass deflected in off the skate of a Flyers defender.

That was it for Hart, who turned 22 on Thursday. He slammed the door shut as he left the ice before heading down the tunnel.

Kotkaniemi then made it 5-0 on another power play at 10:35 of the third as Montreal locked things down to even the series -- and give their absent coach a boost.

"Having the good news on Claude's health was a nice relief for everybody," Muller said. "We have great leaders in this room. They did a great job of getting the guys prepared."

Notes: Flyers regular-season leading scorer Travis Konecny took a shot off his foot in the third period and did return. ... Montreal's Alex Belzile picked up an assist on Armia's goal for the 28-year-old forward's first NHL point.