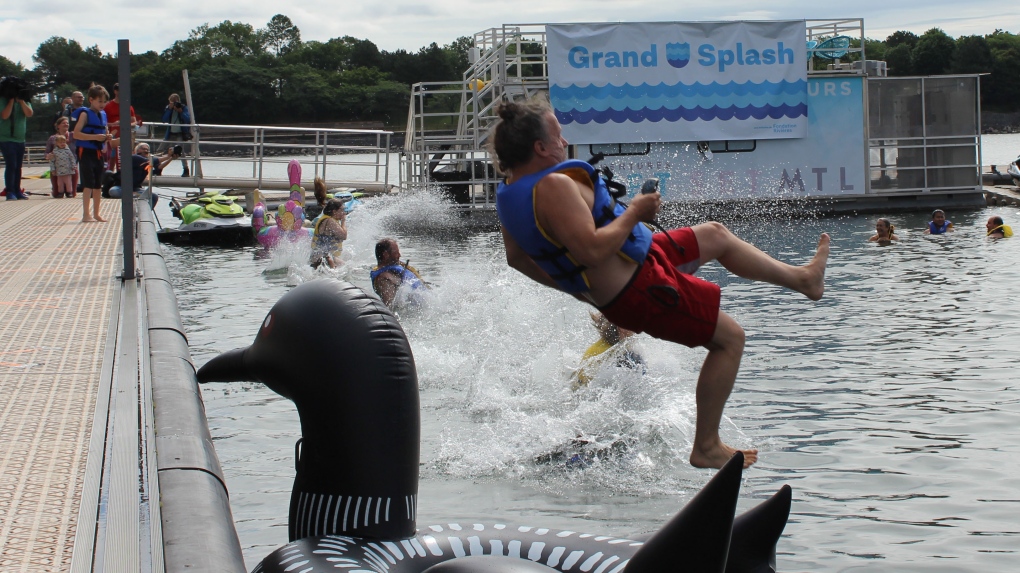 A man is among the around 30 people who braved the cold and jumped into the water in Montreal's Old Port as a way of showing the water is clean and ready to use. SOURCE Fondation Rivieres
MONTREAL -

About 30 people braved the chilly temperatures Saturday morning by jumping into the water of the St. Lawrence River to demand "safe and public access" to swimming in the Jacques-Cartier Basin of the Old Port of Montreal.

The event, dubbed the Grand Splash, was organized for the 15th year by the Fondation Rivieres.

The environmentalist organization says that the water in the Jacques-Cartier Basin is "practically always clean and safe to enter."

The group questions why the Old Port of Montréal Corporation refuses to allow swimming there.

"How many years will it take the Old Port of Montreal authorities to emulate their Quebec City counterparts?" wrote the foundation in a news release announcing the event.

The foundation is referring to the Port of Quebec's decision in recent days to create a public beach in the Louise Basin next summer.

The Old Port of Montreal Corporation told The Canadian Press that it refuses to admit that the water at the Jacques-Cartier Basin is fit for swimming. The organization refered questions about water quality to the Port of Montreal.

"Would the Crown Corporation agree to build a swimming pool at this location? The area is 'dedicated to navigation'," said director of marketing and bussiness relations Nathalie Carriere. "Concessionaires are located there, including Bateau-Mouche and Le Petit Navire, the eastern and Longueuil river shuttles use it and it also has the Port of Call."

The Old Port of Montreal Corporation says it is open to the development of a harbour beach on its land and says it is working with the City of Montreal on the alternative of the Quai de l'Horloge, an option that has often been dismissed because of safety issues that include the current strength and the risks associated with marine navigation.

-- this report by The Canadian Press was first published in French on July 3, 2021.