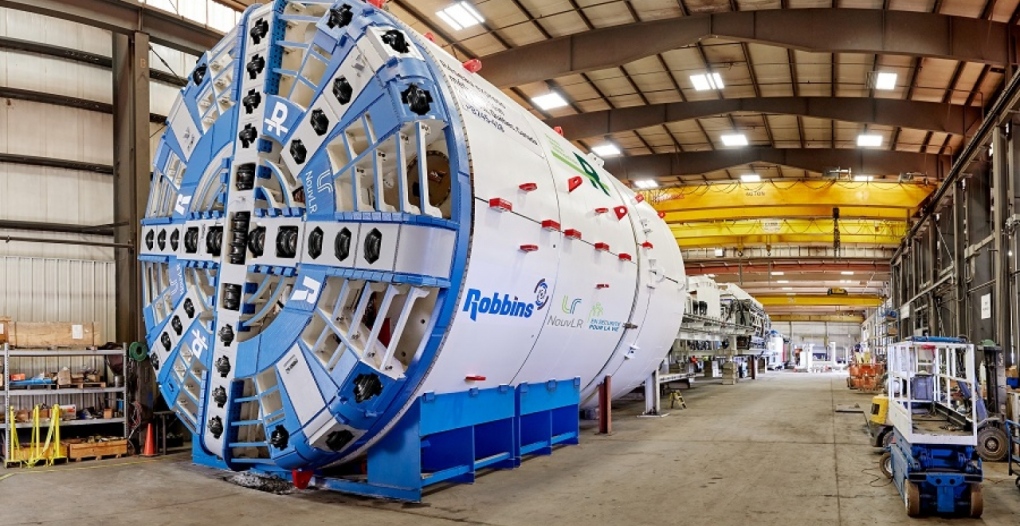 This tunnel boring machine (TBM) will dig a 3.5-km tunnel between the Technoparc and Montreal-Trudeau airport as part of the REM project. (Handout photo)

MONTREAL -- Another day, another sign that the REM electric light rail project is moving along.

The latest bit of news is on the lighter side: on Wednesday the consortium building the REM announced that it has received a tunnel-boring machine (TBM) that will be used to dig a 3.5-kilometre-long tunnel between the Technoparc and Montreal-Trudeau airport.

The organization says the tunnel is being built so that the REM trains servicing the airport can travel 30 metres underneath the Technoparc's wetlands and beneath the airport's runways.

It says the REM project is the first in Quebec to use tunnel-boring technology - which digs a hole through rock and dirt and assembles the tunnel as well. (The video below gives you an idea of how the TBM works)

The 100-metre-long machine was purchased from The Robbins Company in Ohio, and its pieces were delivered via 60 trucks. Those pieces are currently being assembled, and once that assembly and testing of the machine are complete, the construction of the tunnel is expected to begin in a few months.

The REM consortium is also asking for the public's help in coming up with a name for the new machine. By construction industry tradition, large machinery such as the TBM is given a woman's name, in honour of Saint Barbara, the patron saint and protector of miners and other underground workers.

The person who suggests the name that is chosen by an internal committee of REM and TBM project managers will win a tour of the REM site and will take part in the inauguration of the TBM in December. You can submit your suggested name here.

The fact that the winning name will be picked by REM authorities negates the possibility of the public naming contest going awry, as it did in the case of 'Boaty McBoatface,' the $375-million British research vessel that was so christened by a public vote on an online poll. It was a cautionary tale that was not forgotten by some on social media in the wake of the TBM announcement: