'The pillar of her family': Montreal child protection workers who died by suicide remembered as strong, empathetic

MONTREAL -- Sarah Hunt-Donais worked two jobs to pay her way through a psychology degree, had a black belt in martial arts and was “like a mother” to her younger siblings, an old friend said.

Hunt-Donais, 25, was one of the two Quebec youth protection workers who died by suicide this month in quick succession, sparking worry and grief among their colleagues, and public condolences from the province’s authorities.

But Hunt-Donais’s death, while she did work at a famously stressful job, can’t necessarily be blamed so easily on work conditions, said an old friend of hers. The friend described her as a private person who wouldn’t want her problems summed up by strangers who never met her.

“Sarah loved her job. She worked at the [department of youth protection] to eventually become a therapist,” the friend said.

The department should no doubt provide more support to its employees, the friend said, but Hunt-Donais was impressively tenacious and not easily daunted by a heavy workload, nor necessarily by personal pressures.

Pascale Brabant, the other young woman who died, loved travelling, art, and working with kids, posting on social media that her work in youth protection was “the most beautiful job in the world.”

Brabant passed away on Feb. 4 and Hunt-Donais on Feb. 9. The following day, at a news conference, the director of central Montreal’s health authority, Sonia Belanger, addressed both women’s deaths by saying that youth protection staff were reeling.

"We are absolutely devastated by this terrible news, which creates a significant shock wave in our establishment," she said.

Despite the common factor of their jobs and their love of working with children, the two women were very different.

Brabant, 28, grew up in the Eastern Townships and leaves behind a big family, including three siblings and two half-siblings, according to her obituary.

In online condolences, friends remembered her as caring, sensitive and thoughtful, a talented artist with a love of adventure.

“I will always remember this beautiful little mite, so intelligent, curious, vibrant with joy, who then became a woman sensitive to the pains of others, generous with her time, adventurous and loyal to the people she cherished,” wrote one person.

On Facebook, beginning in October 2019, Brabant posted photos of a long-term working vacation in Australia, which appeared to have been cut short by the pandemic.

“How can you meet so many wonderful people in just 2 months, I'm leaving Byron Bay with my head full of memories!” she wrote in early January of 2020, saying she’d just taken a job as a nanny for a family in Brisbane.

“I watch this video and I feel a pinch, it's the most beautiful job in the world but it's so heartbreaking… I miss my job so much,” she wrote.

Through the pandemic, Brabant posted photos of herself hiking, walking and working on paintings. She posted in July that she had taken another job in youth protection.

Her family hasn’t yet responded to a request for comment but described her as “radiant” and an “artist at heart” in their obituary.

Hunt-Donais grew up in Montreal, also in a big family, with four siblings, including two younger sisters who relied deeply on her, said her friend.

“She was like the mother of these siblings, and the pillar of her family… these two sisters were her life,” said the friend, who knew Sarah from childhood but didn’t want to have her name published.

Hunt-Donais’s friend described her as focused and very hard-working. That was clear even in childhood, when she earned a black belt in martial arts as a girl and would fight adults 20 years older than her.

She paid her way through university but had a longer-term goal to become a therapist, so she continued in school to get a certificate in sexology, the friend said, while taking a job in her field. Her obituary said she was a student at the Université de Montreal at the time of her death.

Hunt-Donais was beloved by the children she worked with in youth protection, said her friend.

“Sarah was called ‘Mrs. Smile’ by the children she followed! Can we end the stigma that only people who show their sadness are depressed? She was always smiling,” her friend wrote in a message to CTV.

A vigil was held in Montreal for both women on Monday evening. Some of their colleagues attended, and some said working in the field has become more stressful in the pandemic. 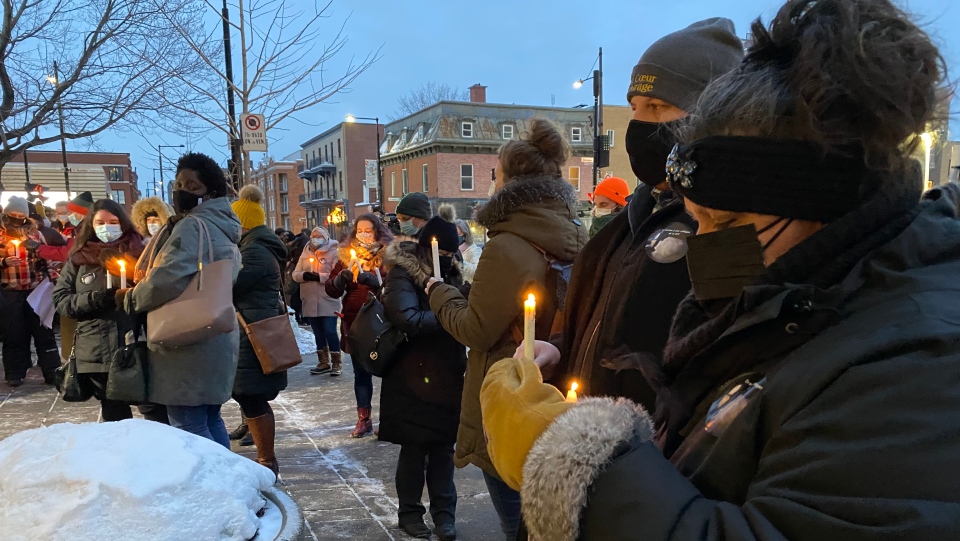 “There’s no question it’s demanding, emotionally and mentally,” said Marilou Labelle, a youth protection case worker who said she had worked on cases with either Brabant or Hunt-Donais in the last few years, though she didn’t want to go into details.

But some said that simply hearing the news of the two deaths was painful.

“It was already difficult, so for sure we have to find ways to address the situation and make sure people are well supported.”

Hunt-Dorais’s friend said she wouldn’t like the thought of people discussing the details of her life, or even having her photo published, let alone trying to understand why she ended her own life.

“Sarah was low key,” the friend said. She “fulfilled her own self, and she did it alone.”

Your family doctor (if you have one)

Your local CLSC, CISSS or CIUSSS: 811