The ‘one call, one appointment’ hotline for children is working, say Montreal doctors

Two months after the launch of a new hotline for Montreal families who have a sick child, pediatric hospitals are reporting the project is helping to ease overcrowding in emergency rooms.

Doctors are now seeing significantly fewer patients with non-urgent complaints showing up at the hospitals for care.

“Part of it may be that there was a huge burst of viral activity that may have settled down a little bit but not enough to explain perhaps the relief that we're feeling in our emergency rooms,” said Dr. Robert Barnes from the Montreal Children’s Hospital.

Instead, it’s more likely, he said, that the "one call, one appointment" system is the reason behind the still busy but improved situation in the ERs.

“Having hundreds of available appointments per day in order to offer that credible alternative to a multi-hour wait [in an emergency room] has made a huge difference,” said Barnes who is also the associate director of professional services.

“He started coughing on Thursday and it intensified, so I decided to consult. He was born prematurely and gets pneumonia every year,” she told CTV News in an interview at District Medical Clinic in Ahuntsic-Cartierville.

“I think it’s important and it’s really efficient. We got an appointment right away and it’s the clinic that’s the closest to my house,” Amzoug said, as her son Yacine sat beside her in the exam room, coughing and appearing tired.

Family doctor, Sabrina Manoli examined the boy, noting to his mother that his lungs did sound a bit "tight," and suggested treatment. 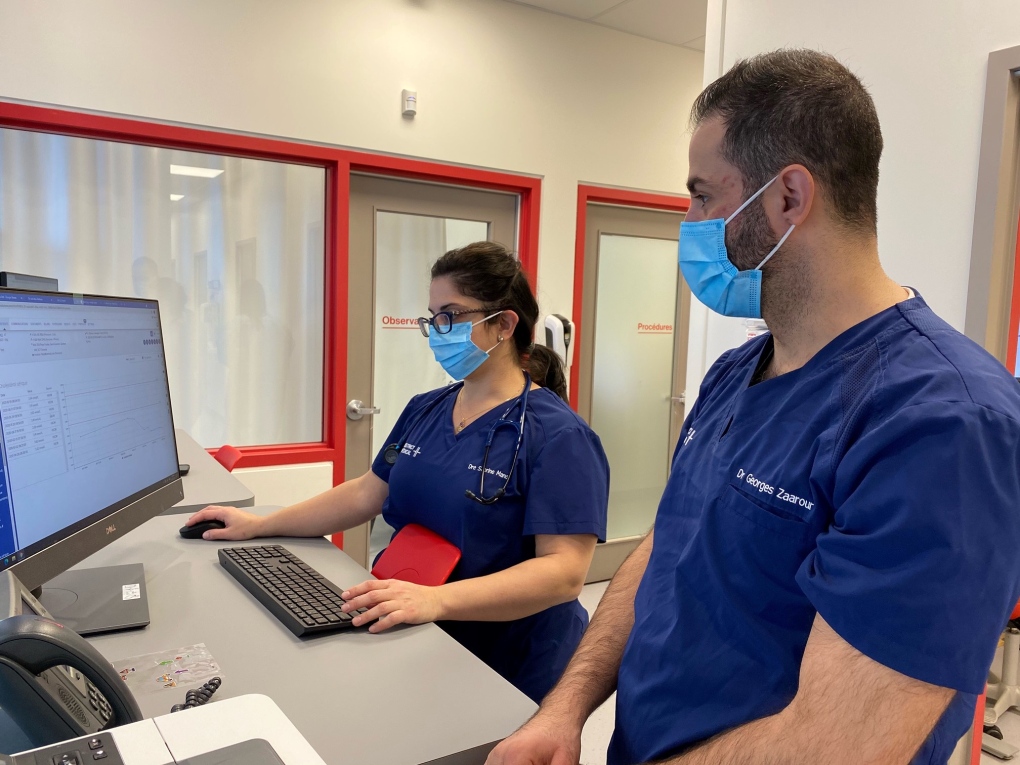 The appointment service is available to any child up to 16 years old on the Island of Montreal who needs to see a doctor quickly for a mild illness.

The phone number and the allotment of open pediatric appointments were introduced on Sept. 28 by Montreal’s regional department of general medicine (DRMG)

When a parent calls 514-890-6111, they’re asked about the symptoms and are given a doctor’s appointment at one of 12 designated health clinics around the city. Or, they’re referred to more appropriate resources.

“It’s the first time actually that we launched this type of service, and the response has been very positive from the population,” said To Nhu Nguyen, an associate director at the DRMG, who works on access to first-line services

There are up to 600 appointments available on weekdays, and 400 on weekends.

“They speak to a person. That's one comment that has come back over and over that people appreciate an answer and it's actually quite quick. The average delay for speaking to somebody is two minutes,” Nguyen said.

THE NUMBERS TELL THE STORY

Below are the numbers for Sept. 28:

Reserving appointments for children meant that family doctors had to find time in their already busy schedules.

The medical director of District Medical, Dr. Georges Zaarour said the “response from the physicians and the nurses and administrators has been very good.”

“We’re able amongst our 18 family doctors to squeeze in three shifts of four hours per day,” the family doctor said, adding that “having our very complicated health care system more accessible to the general public is a great idea.”

The timing couldn’t be more perfect.

With gatherings of up to 20 people permitted by the government this holiday season, regular non-COVID-19 viruses will likely continue to spread.

“We know that there's capacity in the system to see these patients, these children and the holiday season is upon us. We would like to remind people that the service exists," Nguyen emphasized.

"It works, it’s a phone call away and we are open during the holidays, on Christmas Eve, Christmas Day, New Year's Eve or New Year's Day, regular hours,” she said.

WHEN TO GO TO THE EMERGENCY ROOM

There are times when calling the appointment hotline just won’t suffice.

“We have every reason to be concerned, just because it's wintertime too, and we always see an increase in the wintertime of respiratory viruses being shared,” said Barnes.

Barnes said any newborn with a fever is an “absolute emergency,” as are children who are having difficulty breathing or who are unable to eat and drink enough and are at risk of dehydration as a result.

“If the child is truly sick in need of immediate attention, you can be sure that we'll be there for you,” Barnes said.

People hoping to visit the Greater Vancouver Zoo were turned away at the gates Tuesday morning as conservation officers and Mounties dealt with a wolf escape.