Temperatures to soar in Southwestern Quebec ahead of school year

Temperatures to soar in Southwestern Quebec ahead of school year 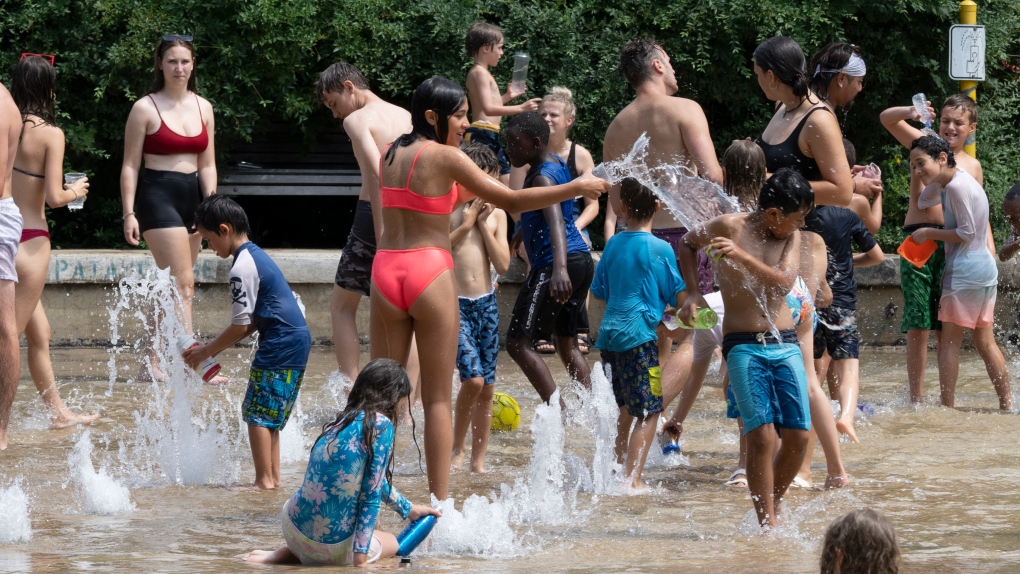 People cool off at a splash pad as temperatures go above 30C, Wednesday, July 20, 2022 in Montreal. THE CANADIAN PRESS/Ryan Remiorz

The last "summer" weekend for some students is expected to feature July-like heat and humidity.

After a brief cool down on Thursday around Southwestern Quebec featuring clouds, showers and below-average temperatures, sunshine is expected to return on Friday, and so is the heat. 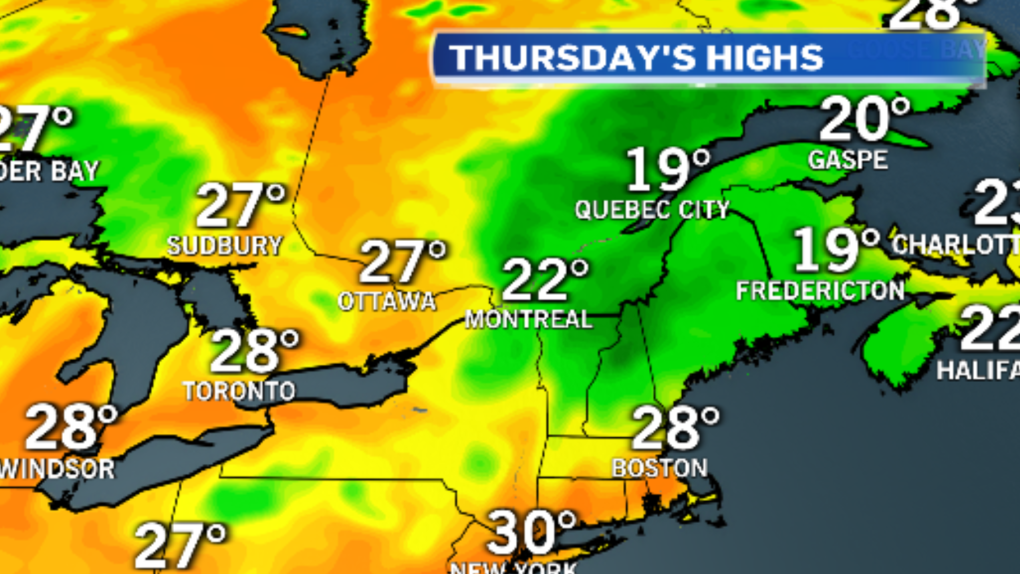 Temperatures in Southern Quebec will be cooler on Thursday and begin to rise Friday for the weekend.

Daytime highs on Friday in Montreal will climb into the upper 20s. Saturday and Sunday could see highs of 30 degrees Celsius and above with humidex values in the mid-30s. 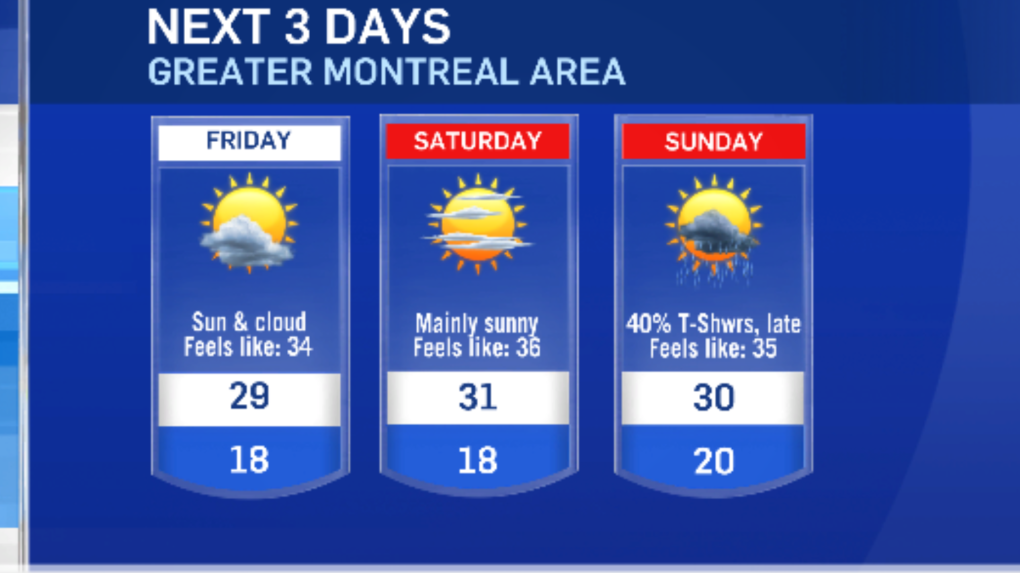 Temperatures in Montreal are set to rise for the weekend.

Last year, the city recorded a total of 13 days with highs of 30 C and above. August 2020 only had one. Montreal typically sees two to three 30-degree days in August.

Unlike Western Canada, which has seen extended heat warnings and dozens of temperature records broken this summer, temperatures in Montreal haven't been exceptionally hot.

"We have had warmer periods every month since May, but cooler periods as well," says meteorologist Simon Legault of Environment and Climate Change Canada.

Montreal saw its earliest heat wave ever this year, with daytime highs above 30 C between May 12 and May 14 but Legault notes the city hasn't seen prolonged periods of oppressive heat and humidity as in past years.

Sunday could feature a few widely scattered, late-day thunderstorms, which will drop temperatures back into the mid to upper 20s as many get ready to head back to class. 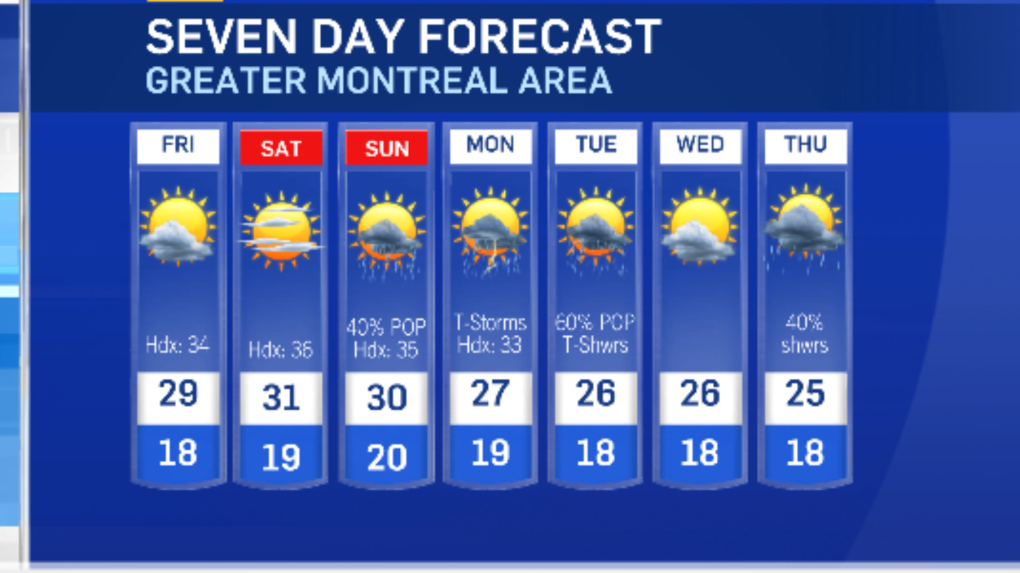 Many trapped in Florida as Ian heads toward South Carolina

Rescue crews piloted boats and waded through flooded streets Thursday to save thousands of Floridians trapped after Hurricane Ian destroyed homes and businesses and left millions in the dark. The destruction began to come into focus a day after Ian made landfall in Florida as one of the strongest hurricanes ever to hit the U.S.

Hundreds of royal fans lined up outside Windsor Castle for the chance to pay their final respects to Queen Elizabeth II as the chapel where the late monarch was buried opened to the public Thursday for the first time since her death. The queen's death certificate says the 96-year-old monarch died of old age.

The RCMP says Jeremy MacKenzie's arrest was not influenced by Conservative Leader Pierre Poilievre's request to have the Mounties look into comments about his wife.

Quebec's immigration and labour minister claims that newcomers to the province "go to Montreal, don't work, and don't speak French," though he later tweeted he expressed "his thoughts badly."

FinTok: How TikTok is changing financial literacy in Canada

Financial TikTok – or FinTok – has become one of the most popular trends on the platform, and is emerging as a go-to resource for Gen Z and millennial audiences looking to learn how to invest, budget or even spend more wisely.

Russia to annex more of Ukraine on Friday

Russia planned to annex more of Ukraine on Friday in an escalation of the seven-month war that seemed sure to further isolate the Kremlin, draw it more international punishment and bring extra military, political and economic support to Ukraine.

A rift has emerged in the Danish royal family following a decision by Queen Margrethe to strip four of her eight grandchildren of their royal titles in order to "future-proof" the monarchy.

Diabetes risk twice as high for those who feel lonely: study

People who feel lonely are twice as likely to develop Type 2 diabetes, according to a new Norwegian study that analyzed data collected from more than 24,000 people over more than 20 years.

Gas prices jumped overnight in some cities across Canada by as much as almost 20 cents.