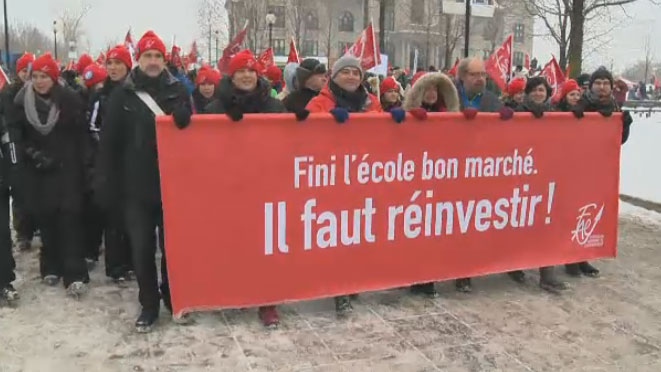 Teachers march in Montreal in this file photo

MONTREAL -- Dozens of teachers surrounded the offices of Quebec's Education Minister on Tuesday morning to demonstrate their opposition to Bill 40.

About 50 people, all wearing red caps with their union's logo, held up a banner reading "Bill 40: it should not pass" outside Jean-Francois Roberge's riding office in Chambly.

They then marched into the offices, still holding the banner and chanting, "We don't want it."

Teachers and school boards across Quebec are strongly opposed to Bill 40, the proposed legislation that would eliminate elected school boards and replace them with "service centres" staffed by people appointed by the provincial government.

The FAE, the union staging Tuesday's protest, said it is also concerned that Bill 40 would make drastic changes to report cards, and allow teachers from other schools to alter a pupil's grades.

The FAE is also launching an advertising campaign to increase opposition to the legislation.