Canada's highest court has ruled that Alexandre Bissonnette, who murdered six people at the Quebec City mosque in 2017, will be eligible for parole after 25 years.

The unanimous ruling, handed down by the Supreme Court of Canada on Friday, determined that imposing consecutive periods of parole ineligibility in cases of multiple first-degree murders is unconstitutional.

Bissonnette, who is serving a life sentence, will now get a chance at parole in his early 50s.

The court said it must render "invalid immediately" a provision in the Criminal Code passed by Stephen Harper's government in 2011 that allowed judges to impose consecutive periods of parole ineligibility in cases of mass murderers, rather than imposing them concurrently.

"The conclusion that imposing consecutive 25-year parole ineligibility periods is unconstitutional must not be seen as devaluing the life of each innocent victim," the Supreme Court wrote in its 92-page decision.

"Everyone would agree that multiple murders are inherently despicable acts and are the most serious of crimes, with consequences that last forever," the decision said.

"This appeal is not about the value of each human life, but rather about the limits on the state's power to punish offenders, which, in a society founded on the rule of law, must be exercised in a manner consistent with the Constitution."

Bissonnette was 27 when he stormed the Centre Culturel Islamique de Quebec, the province's largest mosque, on Jan. 29, 2017 armed with a semi-automatic rifle and a pistol, and murdered six worshippers following evening prayers. He also seriously injured five others. 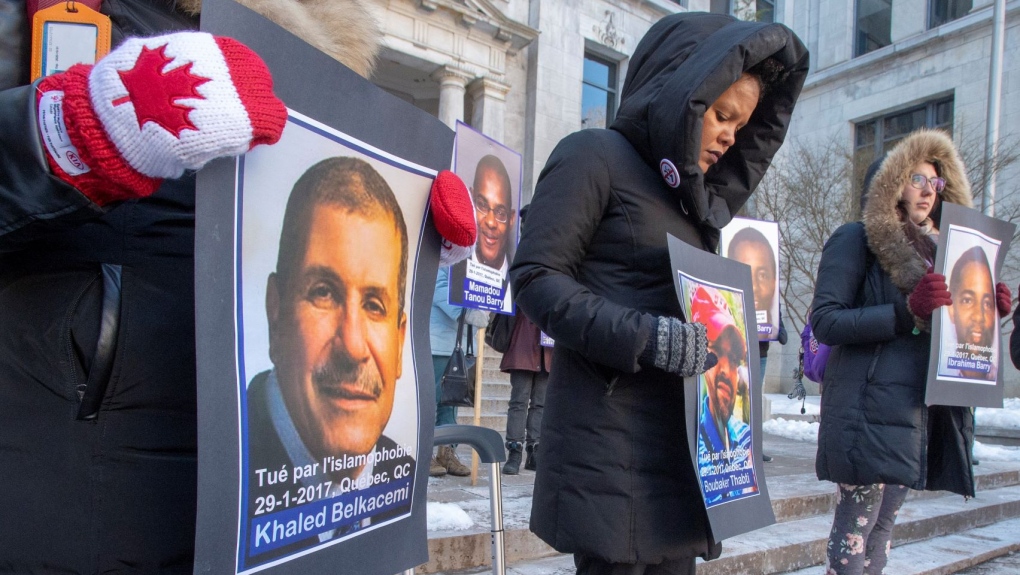 People hold photos of the victims during a vigil, Wednesday, January 29, 2020 in Montreal to commemorate the third anniversary of the mosque shooting in Quebec City that left six people dead.THE CANADIAN PRESS/Ryan Remiorz

The mosque's leadership said it was disappointed by the ruling, saying in a statement that it "fails to give due consideration to the atrocity and scourge of multiple murders, as well as the hateful Islamophobic and racist aspect of the crime."

"While we welcome this decision of the highest court in the land, it brings this judicial chapter to a close and we now and we now wish to focus on the future," it said.

Speaking to reporters in Quebec City Friday morning, Mohamed Labidi, co-founder and former president of the Quebec City mosque, said he would have preferred the original 40-year period of parole ineligibility because it balanced the "atrocity of the situation" with the constitutional concerns.

"Our deep concern is about the orphans that will see the murdering person in the roads of Quebec City 25 years after this tragedy," Labidi said.

Our thoughts are with the families of the victims of January 29th, 2017 today, as old wounds are reopened by the Supreme Court of Canada's recent decision.

We will always stand with them. pic.twitter.com/H1WtwYedPK

The Supreme Court also underscored that Bissonnette's offences were "heinous crimes" that were "of unspeakable horror and left deep and agonizing scars in the heart of the Muslim community and of Canadian society as a whole."

Bissonnette's defence lawyer, Charles-Olivier Gosselin, said Friday he was "extremely happy" with the high court's judgment, which he said meant his client can start on a path to rehabilitation.

"I talked to my client, Mr. Bissonnette, and his family, and they are relieved," Gosselin said in a press scrum after the Supreme Court's decision was released.

"It was a long process of five years so they can move forward now, look forward for the future and Mr. Bissonnette can have some hope now that he can take time to rehabilitate himself and… prove to himself and to other people that rehabilitation is possible even if we commit an extremely grave crime."

ORIGINALLY SENTENCED TO LIFE WITH NO PAROLE FOR 40 YEARS

The landmark ruling is one that was closely watched as it will have implications going forward for all offenders convicted of multiple first-degree murder charges, including those currently before the courts.

Bisonnette pleaded guilty in 2018 to 12 charges, including six counts of first-degree murder.

He was originally sentenced in 2019 to life in prison with no eligibility for parole for 40 years. The judge relied on a revised law in 2011 that gave judges discretion to impose sentences one after the other rather than concurrently.

That would mean the sentencing judge could have technically imposed a 150-year-sentence for parole ineligibility in Bissonnette's case.

Believing that such a sentence would be "cruel and unusual" punishment, he imposed concurrent sentences of no parole for 25 years for five of the six murders. On the sixth murder count, he added another 15, bringing the total to 40 years.

Both the Crown and the defence appealed the sentence. The Quebec Court of Appeal agreed with the Superior Court judge that consecutive sentencing was a violation of the Charter, but also ruled that the judge erred in rewriting the law by allowing a 40-year period for parole eligibility.

The panel of judges on the appeal court finally ruled last year that the appropriate sentence would be what the law allowed for before the 2011 amendment, which meant Bissonnette can apply for parole after serving 25 years.

Quebec's Attorney General appealed the ruling to the country's highest court. In March, prosecutors argued before the Supreme Court, saying that preventing Bissonnette from seeking parole after just 25 does not fit the severity of the crimes he committed.

They asked for it to be raised to 50 years, when Bissonnette would be 77 years old.

Such long sentences would have brought the administration of justice into disrepute, however, according to the Supreme Court's judgment.

"They are intrinsically incompatible with human dignity because of their degrading nature, as they deny offenders any moral autonomy by depriving them, in advance and definitively, of any possibility of reintegration into society," the ruling stated.

"Sentences of imprisonment for life without a realistic possibility of parole may also have devastating effects on offenders, who are left with no incentive to rehabilitate themselves and whose incarceration will end only upon their death." 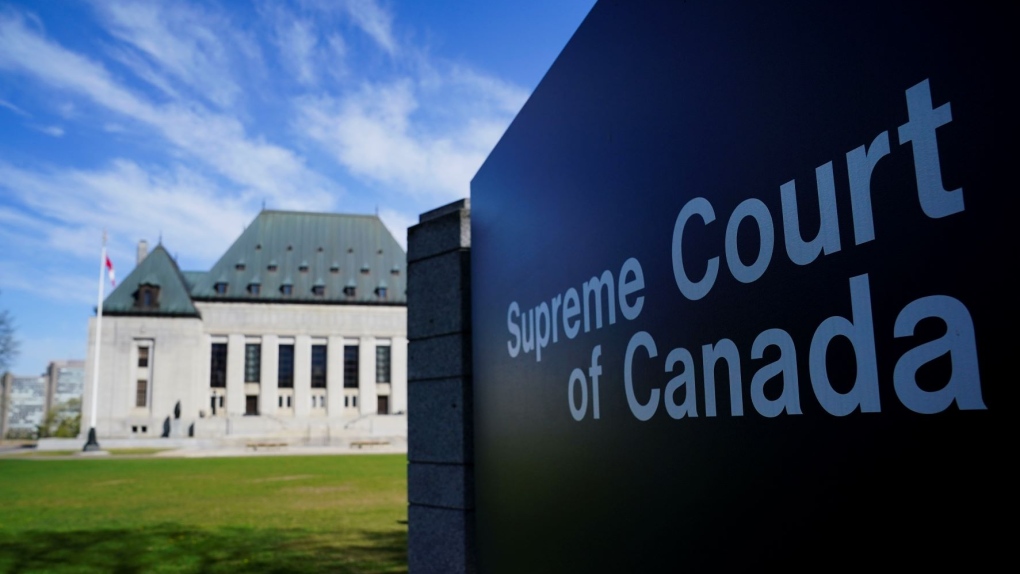 Supreme Court of Canada in Ottawa on Wednesday, May 11, 2022. The court released its long-awaited decision Friday in the matter of Alexandre Bissonnette, who must now serve a life sentence with no chance of parole for 25 years in the killing of six people at the Quebec City mosque in 2017. THE CANADIAN PRESS/Sean Kilpatrick

GETTING FULL PAROLE AFTER 25 YEARS 'UNHEARD OF': LAWYER

Steven Slimovitch, a criminal defence lawyer based in Montreal, said the Supreme Court dealt "another blow" to the former Harper government by striking down the 2011 amendment to the Criminal Code.

"The whole idea of putting one life sentence on top of another, so essentially you could have 100, 120, 150 years, it's -- in my opinion, it's completely un-Canadian," Slimovitch said, adding that he diagrees with the notion of "warehousing" criminals for decades.

In cases of first-degree murder, getting full parole is extremely rare in any case, he said.

"It's unheard of," Slimovitch said.

"You'll be eligible, [but] you're not going to get it the first couple of times because the odds are you haven't fulfilled what the parole board looks at as being a requirement," he said.

"Although it is true, you are eligible… you may get a highly restricted parole, but not full parole."