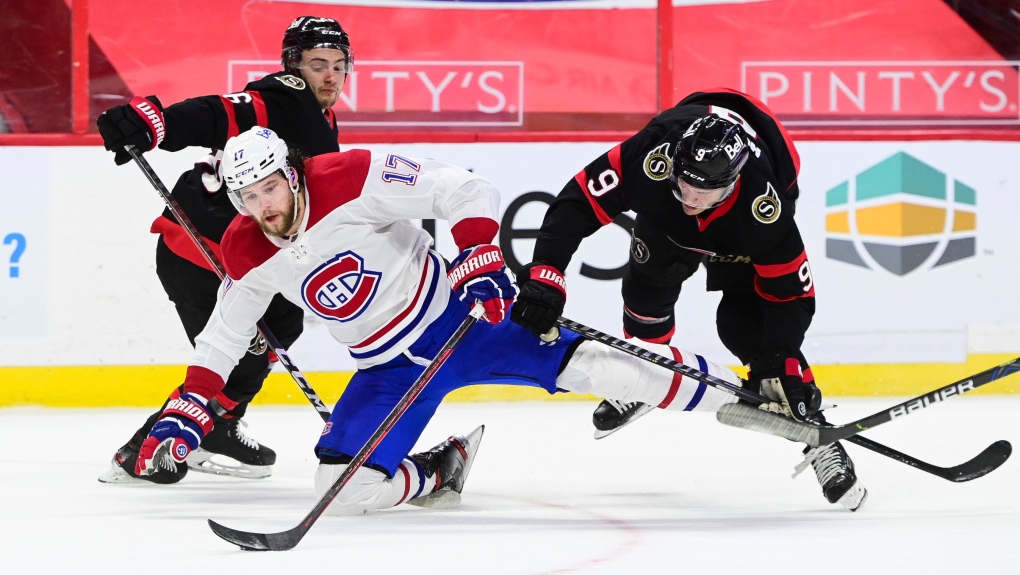 Through all of interim head coach Dominique Ducharme’s post-game zoom sessions when he’s had to try to explain why his team just didn’t have it, he hasn’t been as blunt as he was last night.

It was refreshingly to the point.

Yep, the Montreal Canadiens can’t have nice things. Like a four-game winning streak. They also can’t do things the easy way as they discarded a chance to officially guarantee their playoff spot with a lifeless performance and were deserving 5-1 losers to the Ottawa Senators.

The 2021 edition of the Habs has been maddeningly inconsistent so let’s just say it wasn’t completely unexpected that the team pulled a no-show after three crucial come-from-behind wins. In those games the Canadiens may have fallen behind early but there was always a push from the group that suggested that a turnaround was on the horizon. Instead, the team remained in cruise control at 10 kilometres an hour the full sixty minutes and the Sens revelled in their listlessness.

Now, the team will try and officially punch their ticket to the postseason against the best team in the division and possible first-round playoff opponent. The team would have to be chloroformed to have less energy tomorrow night so you’d expect a game that at least doesn’t make your eyes bleed. Even if they lose their next two games against the Maple Leafs, they’d still be sitting relatively pretty. So instead, let’s just take the coaches' “we were bad comment,” put that abomination in the rearview mirror and focus on the one issue the Canadiens need to fix before the conclusion of the regular season.

That problem is Jesperi Kotkaniemi.

Like most of his teammates last night, the young Finnish centreman and his linemates had a moment or two where they looked half-decent. He was also the Canadiens least used forward, playing just over 11 minutes of ice-time. Meanwhile, the guy picked one spot after him in the draft, Brady Tkachuk, had a goal and was Ottawa’s third most used forward on the night.

Now, the point of bringing this up is not to start some revisionist debate as to whether the Habs made the right selection at third overall in 2018. It’s also not to go down the rabbit hole of the club’s record of drafting and developing young players. It is simply to ask a question.

Why does Kotkaniemi not get the same opportunities Nick Suzuki does?

Let’s rewind to three weeks ago when the Habs were drowning in an ocean of their own ineptitude. Suzuki was one of many who was struggling and yet consistently had one of Tyler Toffoli or Josh Anderson on his wing, no matter how poorly he played.

Look at him now. He has 10 points during a seven-game point streak and looks the best he has all year. He was allowed to work through his problems while being surrounded by talented offensive players. The team has the same opportunity to enact a similar sort of turnaround with Kotkaniemi over their final four games.

Has Kotkaniemi’s recent play earned better linemates? Probably not. He has no goals in 20 games to go along with four assists. The 20-year-old continues to be too passive and fades in and out of games. But as frustrating as it is for some segments of the fanbase and media to accept, that isn’t uncommon for a player of his age.

So how do you rebuild his confidence? You have to find the Batman to his Robin.

When Brendan Gallagher and Tomas Tatar return from injury, they will undoubtedly be placed right back alongside Phillip Danault due to their prior success together. With Suzuki and Toffoli producing while flanked by Joel Armia, you can understand keeping those three together.

Josh Anderson’s longest goal-scoring slump of the season has coincided with playing alongside Danault since Gallagher’s injury. During that same 20 game stretch where Kotkaniemi has struggled, Danault has not necessarily set the world with alight with three goals and seven points.

It seems pretty obvious what needs to happen. Kotkaniemi, as soon as tonight against Toronto, should be playing with at least one of Anderson or Cole Caufield. He is still the second-most talented centreman on the Habs roster and he has to be put in the same position to succeed as Suzuki. Not only for his sake but the sake of the club in the present and the future. Throwing your hands up in the air instead of doing everything possible to get Kotkaniemi going is an indictment not only on his importance to the organization but Ducharme’s effectiveness as a coach. He has to be given the chance to develop chemistry with the most dynamic offensive players on the team.

The power play looks better. The penalty kill looks much improved. Find a running mate for Kotkaniemi and the Habs could be humming along going into the playoffs.

Terrific again. Had to stop way too many high-quality opportunities, the best of which was a diving save off a problem of his own making. Not sure how he should be used the rest of the way with Price set to return but his importance to the team this season cannot be overstated.

One of the few Habs blueliners who played with some semblance of poise last night. Wasn’t particularly good in his own end though. Soft play on Norris in the lead-up to Tkachuk’s goal. Made a few excursions into the offensive zone but they led to nothing.

If you called him scoring last night, get up and buy a lottery ticket. Had the Habs best offensive chances from the blueline, which should say everything about the ineptness of his team going forward. Beaten to the front of his own net far too many times though and Formenton absolutely blew past him for his goal.

His positioning was off repeatedly in his own end. Miscommunication with his forwards led to both Pinto and Brown’s goals. Didn’t do much of anything offensively. His active stick was disruptive at times but had far too many shaky moments.

Didn’t go into the always successful rover mode, which is what he does when he’s at his best. Lost lots of one-on-one battles either in front of his own net or along the boards in his own end. Still think he should keep his spot in the lineup when Weber returns.

A better game compared to one of his worst performances of the season against the Leafs. Still made some questionable decisions with the puck on his stick in his own end. Struggled to exit his zone at times. No hits which isn’t exactly something you see from him very often. But compared to his other blueliners he was decent. Really liked his positioning and sacrifice on the penalty kill. Led the team with five blocked shots. Screened Allen on Paul’s backbreaker.

Not particularly noticeable in either a good or a bad way. Could have scored his first as a Hab walking down main street in the third but couldn’t get it by Forsberg. Struggled with passing his way out of trouble in his own end.

Seven shots on goal at least indicate that he was implicated, which is more than can be said for some of his teammates. Wasn’t able to create much of anything notable. Extended his point streak off of one of his rare faceoff wins for Edmundson’s goal.

Had the Canadiens best chances fall to him but one of the rare nights where he couldn’t convert one. Horrible turnover to Norris in the first. Robbed by Forsberg’s glove on a slot shot and had some half chances around the Sens net. Great setup to Edmundson for his goal.

Led the team with five hits last night and battled hard at times below Ottawa’s goal line. But also looked pretty invisible at times. His lack of effort defensively opened up the passing lane for Brown’s goal. He’s played well the last five games so you knew a bad one was around the corner.

Made one very nice pass to Merrill in the slot for a clear chance. Other than that, next to nothing offensively. Did well on the penalty kill. But if he’s playing with two of the most natural finishers on the team has to do more to create opportunities for them.

Tried to drive to the net a few times with marginal success. Called for a tripping penalty that was iffy at best. His shooting accuracy has been off of late. Consistently misses the net altogether. Not as overtly physical as previous games. Maybe he’s saving it up for the Leafs tonight.

Seemed like he was just a foot away from multiple chances. Never got the bounces. Looks aggressive and confident when he’s out there, something a young player like Kotkaniemi has been lacking of late. Tried to force some things through in the third period with little success. Needs to play with an offensively creative centreman, which Danault is not.

Really difficult to understand his usage, especially in a game that was out of reach early in the third period. Wasn’t particularly good either but how is he supposed to work his way out of a low point without ice time? Made one really nice cross-ice pass to set up Evans for a half chance but couldn’t get it to go. Confidence is shot at the moment. How about getting him some.

Continued to give maximum effort. Tried to make something happen every time he was on the ice with either a hit or a turnover or effective forechecking. His speed continues to stand out. But miscommunication with Chiarot left Pinto alone in front of the net for his goal. More good than bad last night though.

A relatively quiet night by his energetic standards. Wasn’t particularly noticeable offensively although he did try to get to the dirty areas as much as possible. Made one very important block on the penalty kill. An off night.

Continues to be snake bit. Had one pretty decent chance blocked in front. His line was one of the few that was able to sustain any offensive zone time along the boards. Won the majority of his faceoffs again. His skating is still a chore but was more engaged than usual last night at both ends of the ice.

Did well cycling the puck in the offensive zone. Didn’t do anything to put his team in harm’s way defensively. But didn’t threaten at all. Worked hard though.

Felt like one of those games where his sandpaper could have come in useful in front of the net. Didn’t go to the front of the net with as much regularity as usual. Still did some useful work in that vicinity though but couldn’t get inside. Had a couple of rushes that looked like they could cause some trouble but amounted to nothing.

Aren’t you not supposed to change a winning lineup? He did and the results weren’t great. His team looked devoid of energy for long stretches. The role he has for Kotkaniemi on this team continues to baffle. The kid will be integral to any success the Habs wish to have in the playoffs. Defensive zone coverage was ugly but looked like an outlier compared to the club’s recent play. The final four games against their two potential playoff opponents will say a lot about his team.