Sour grapes: vineyard puzzled by theft of $5,000 in fruit 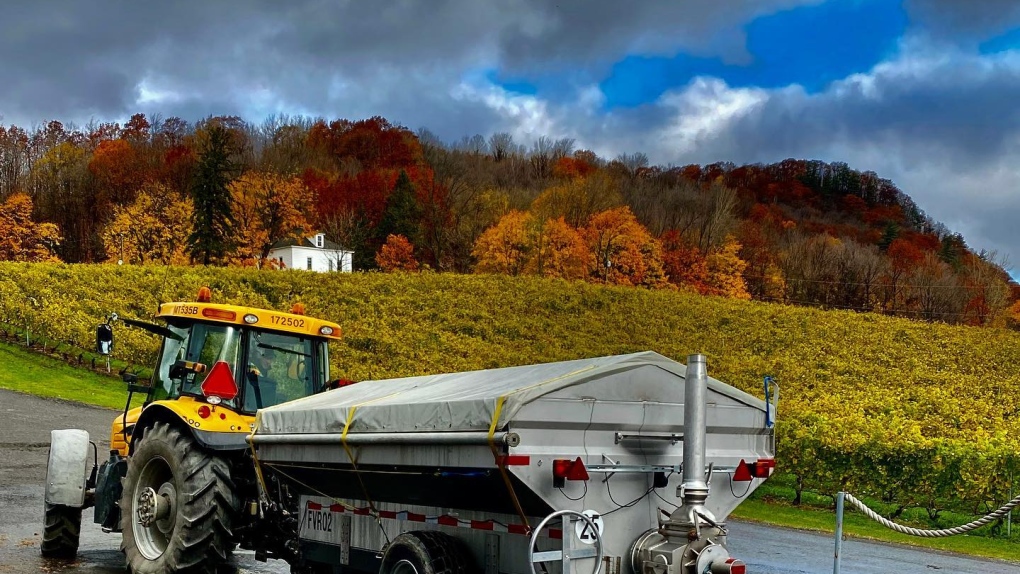 MONTREAL -- A vineyard in Montérégie that had more than $5,000 worth of grapes stolen last week says it’s still stumped about the culprit, despite a few clues and a plea to the public for tips.

One thing that seems sure is that it was done by an amateur, in many senses, says the owner of Vignoble et Cidrerie Coteau Rougemont.

The thief stole 500 kilograms of grapes, cleaning off a quarter of a row of vines—a theft that was only discovered on Thursday morning when workers arrived to harvest them, said Michel Robert, the vineyard’s owner.

That quantity of grapes would have produced almost 300 bottles of white wine, Robert said.

And this week he said he was sure that’s exactly what’s being done with them now.

“There is no market for the resale of grapes to producers,” he told CTV News.

With wine’s appelation system—the process by which wines are verified to come from a certain geographic area—far too much red tape is involved for an upstart to try to sell off a load of grapes, he said.

The thief “is truly believed to be an individual, for his own consumption.”

Vineyard staff also believe it’s someone local because there were ATV tracks in the area of the theft.

It must have been someone who knew the land very well, said Robert, since he or she picked a particularly isolated corner of the vineyard. It wasn’t “someone who was just there last Sunday to pick apples.”

HOW TO CATCH A GRAPE THIEF

Rougemont is a relatively sparsely populated area about 45 minutes east of Montreal.

So how easy is it to catch someone in a corner of rural Quebec who’s equipped to home-brew 300 bottles of wine? Not necessarily easy.

Quebec provincial police opened a file on the case last week and said Monday they have no updates.

They agreed last week that there were traces of an all-terrain vehicle in the area. On Monday, a spokesperson said she couldn’t specify what steps police can take in this sort of investigation.

“We don’t want to give the suspects any clues,” said police spokesperson Aurelie Guindon.

She said the case was “unusual,” but recalled another case a few years ago where police were asked to find thieves who stole some beehives near Victoriaville, northeast of Rougemont.

There were a few other signs of the criminal’s sloppiness. He or she, or they, were using black garbage bags to collect the haul, and some of them were left behind. Police later collected them as evidence.

“They must have been on the run a bit,” said Robert. “They just got on all fours and they picked the grapes with pruning shears, or by hand, and they put that in their bags as they went.”

If two people collaborated, picking that volume could be done in under half an hour, he said.

But there was another sign that they didn’t really know what they were doing—they damaged the vines in the process because of how they were pulling the grapes off.

“Instead of cutting the [grape] bunch with loppers, they were simply pulling on it,” he said. “Some come off easily and others are more difficult, which can cause some branches to break.”

That will be another financial loss for the vineyard, on top of the retail value of the lost bottles of wine, which would have each sold for $15 to $20.

“We had some broken branches, which will affect the vines next year as well,” he said.

A callout on Facebook last week, asking people to send any information, has netted nothing so far, said Robert.

Still, police should have a certain window of time to catch the culprit red-handed. If the person or people really are making wine at home, they’ll have a big operation going.

The grapes added up to about 30 pails, said Robert. It’s an amount you could process in your garage with a small press, he said. And that’s surely already underway, since the grapes wouldn’t keep for even a week.

He said he “hopes” that’s what’s happening, rather than wasting them.

Still, that level of at-home-winemaking would be noticeable in a search—if police can find it in time.

For his part, Robert offered five cases of wine to anyone who could provide police with a helpful tip.