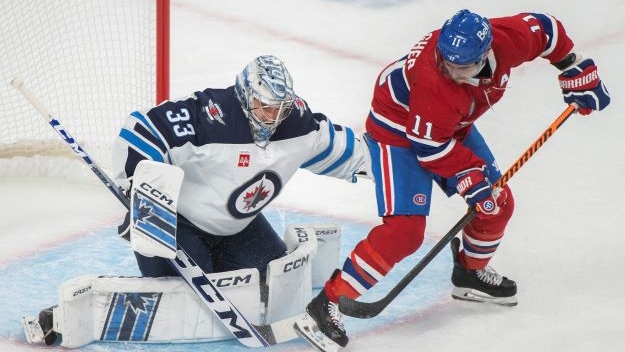 Nate Schmidt scored the game-winning goal with just 18 seconds remaining to lift the Winnipeg Jets to a 4-3 victory over the Montreal Canadiens at the Bell Centre on Thursday.

Winnipeg's Brad Lambert picked up his first NHL pre-season points, notching the equalizing goal in the final period and dishing one assist. Evan Polei and Cole Maier also scored for the Jets.

Jake Allen allowed one goal and made 10 saves in 30 minutes of play. Cayden Primeau made 10 saves and allowed two goals after entering the game in place of Allen.

Jets netminder David Rittich stopped nine of ten shots in two periods of play. Arvid Holm was between the pipes in the third period, surrendering two goals and making 13 saves.

Guhle continued to impress in pre-season action, this time alongside David Savard on the Canadiens' first defensive pairing. The 20-year-old broke the ice in the first period after Kirby Dach left him the puck to beat Rittich with a swift wrist shot from the right faceoff circle.

The Jets responded a few minutes later when Polei tipped Kyle Capobianco's low shot from the point to even the score.

Maier took it upon himself to give Winnipeg its first lead of the night in the second period. The centre rounded the net and lodged the puck under Primeau's skate and into the back of the net.

The Canadiens were 0-for-5 on the power play until Capobianco took a costly four-minute high sticking penalty. On a four-on-three advantage, Gallagher struck the puck in mid-air to beat Holm and tie the game at 2-2 in the third.

Montreal regained its lead on the very same power play when Caufield sent a wrister past Holm.

Winnipeg equalized with an individual effort from Lambert. The centre took advantage of a Evgenii Dadonov defensive mishap and, despite being defended by two Canadiens players, managed to take a shot that stunned Primeau and tied the game at 3-3.

Schmidt left no opportunity for the game to go to overtime when he wound up a slap shot from the point to send his team home with the win.

A judge has acquitted Maj.-Gen. Dany Fortin of sexual assault over an allegation that dates back to 1988. The allegation stemmed from his time at the military college in St-Jean-sur-Richelieu, Que., which the complainant also attended.