Maryna Krejcarova says she hasn’t been able to sleep since Russia invaded Ukraine nearly a month ago.

"We are scared every day," she said. "We are waking up checking the news from Ukraine. I can’t tell you they’re fine because they’re not."

Krejcarova, who is part of the Ukrainian Canadian Congress, marched through the streets of Montreal with hundreds of other demonstrators Saturday.

The demonstration began with recordings of air raid sirens. Many of those there called for peace in the region and echoed calls from Ukrainian President Volodymyr Zelenskyy for allied leaders to enforce a no-fly zone over Ukraine.

"Russia has turned the Ukrainian sky into the source of death for thousands of people," said Zelenskyy, appearing before the United States congress by video conference on March 17. "I call on you to do more."

"We need you right now,” he added. “The destiny of our country is being decided." 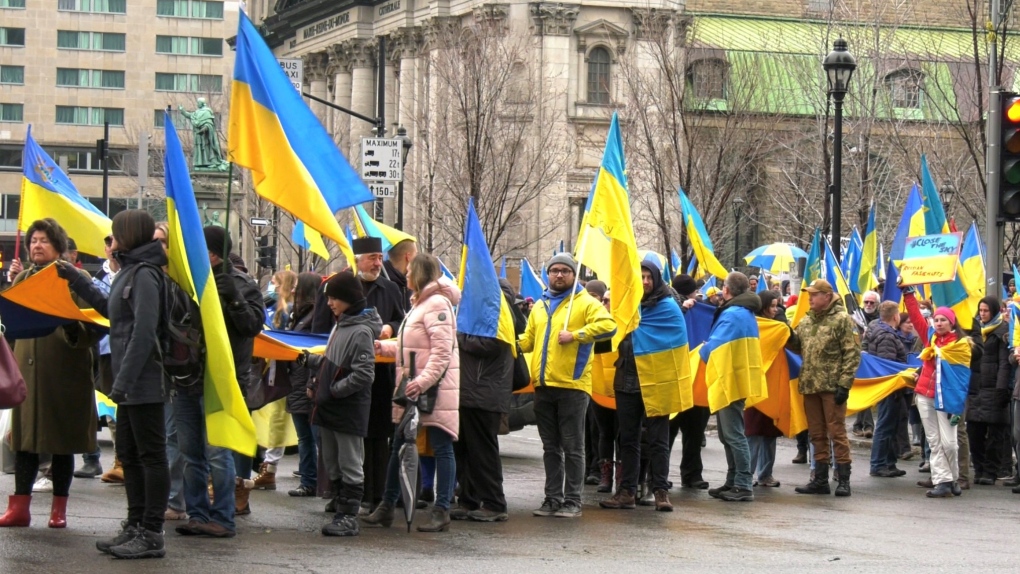 U.S. President Joe Biden, who said he listened to Zelensky's speech at the White House, did not directly respond to the criticism that the U.S. should be doing more for the Ukrainians. But said the country is "united in our abhorrence of Putin's depraved onslaught, and we're going to continue to have their backs as they fight for their freedom, their democracy, their very survival."

A no-fly zone is "absolutely vital," according to Ukrainian Canadian Congress Executive Council Member Michael Shwec. “The only planes that are flying over Ukraine right now are Russian planes that are bombing the country."

On March 22, a free benefit concert will take place at Montreal’s Notre-Dame Basilica. The Korwin-Szymanowski foundation, which organized that event, will accept donations in support of humanitarian work at the Polish-Ukrainian border.

The Ukrainian Canadian Congress has also been collecting first-aid materials to ship overseas to aid civilians.

-- For more details on the demonstration, watch CTV News’'Angela MacKenzie’s report above. This article was published with files from The Associated Press.

The beginning of February is expected bring Arctic-like temperatures across much of Eastern Canada, thanks to frigid air from the polar vortex. The cold snap will descend on Eastern Canada this week, with temperatures becoming seasonable again on Sunday. In between, much of Ontario, Quebec and Atlantic Canada can expect the coldest days yet this winter.

Bobby Hull once proudly said that he played the way he lived -- straightforward. The Hockey Hall of Famer, who electrified fans through the 1960s and 70s, died on Monday at the age of 84. Hull played for the NHL's Chicago Blackhawks before a jump to the Winnipeg Jets of the upstart World Hockey Association in 1972, a move that led to lawsuits but ultimately higher salaries for hockey players.