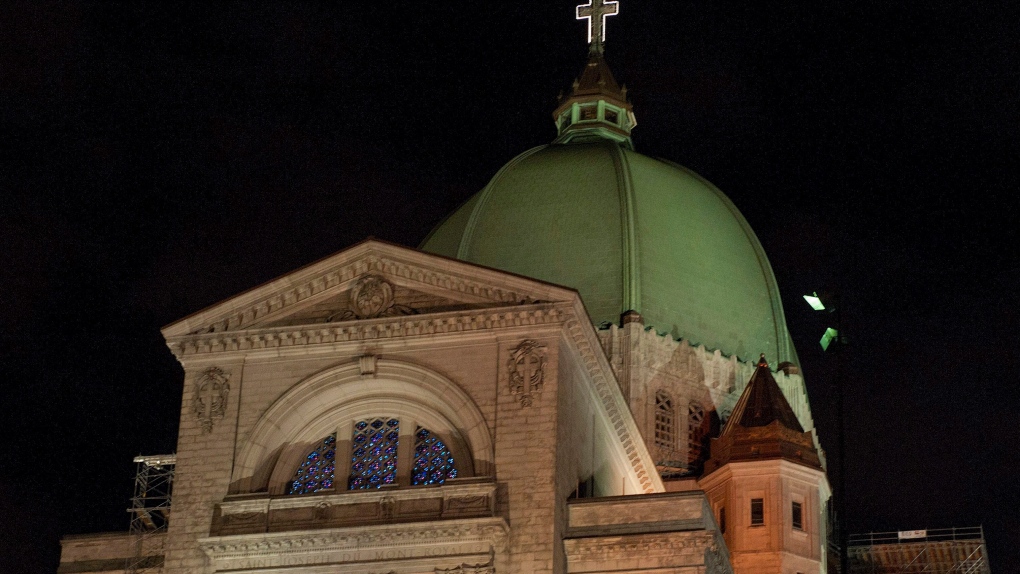 People stand outside the Saint Joseph Oratory in Montreal on October 16, 2010. In 2020, the emblem of the city has seen revenues shrink massively due to the COVID-19 pandemic. THE CANADIAN PRESS/Peter McCabe

MONTREAL -- Two million visitors go to Saint-Joseph du Mont-Royal's Oratory each year, but due to the COVID-19 pandemic, tourists are not there this year.

The situation is causing major financial losses for the emblem of Montreal.

On this Sunday, Aug. 9, Father Claude Grou was preparing to celebrate mass marking the birthday of Saint Brother Andre, founder of the chapel on Mount Royal, which has become the oratory.

However, as opposed to a normal year where up to 1,500 worshipers cram into the basilica, there were no more than 250 seats available in order to comply with public health rules.

"Usually, we do something much more festive, which we cannot do," he said.

With the lack of a crowd, there are more than 1,000 faithful who will not donate.

On an average summer Sunday without a health crisis, between 4,000 and 5,000 people attend one or another of the daily celebrations. All those people who will not pass by the shop, light paper lanterns or stop for a snack at the local cafe.

"We have not yet been able to assess the exact amounts, but there is no doubt that there is a significant shortfall in a place like the oratory because our souvenir store is operating at around 20 per cent of what ot normally does during the summer," said Grou.

That clientele is currently "dormant" in the words of Father Grou.

"Of course, there is a very significant decrease and we will have to look at how we can readjust to the financial reality that is presently presenting itself," he said.

The sources of income for the institution included in the Mont-Royal heritage site come from a program of private donors - who could prove to be less generous in times of crisis, but "a significant percentage" of the budget comes from regular activities at the oratory.

"This percentage is not zero. There are still people at the celebrations and people coming to the store. I think we have to spend the summer period to make a more global assessment," said Grou.

Grou took the opportunity to invite Montrealers and Quebecers to rediscover the place in the absence of foreigners, a bit like the Parisians who reclaimed the Eiffel Tower during the crisis.

"It's easier to get to, we don't have 25 tourist buses blocking the entrances! For the people of Quebec, it's an opportunity to come and discover things they haven't visited for years and to be amazed at how things have developed," said Grou

The novel coronavirus pandemic has not only damaged finances, but it has also delayed the major renovations by two months.

Fortunately, the funding for the project is not compromised since the funds come from a separate campaign. Everything should, therefore, proceed.

"We are confident that when the plan is completed around 2023-2024, the flow of tourists will have resumed its course fairly normally," said Grou.

The absence of visitors has allowed the oratory to carry out certain internal work, including improving the sound system in the places of celebration.

Despite the difficult circumstances, the rector still feels that Saint Joseph's Oratory of Mount Royal has a certain advantage since it has two places of celebration. Its crypt can accommodate 125 to 150 faithful, and its basilica can easily accommodate more than 200.

Since June 29, masses have resumed their rhythm, but the mechanics put a lot of pressure on the staff. In order to comply with all hygiene and physical distancing rules, the oratory must staff more positions.

"It takes a special effort. We have someone at each entrance to the oratory to tell people to purify their hands, to wear a mask. When they arrive in the place of worship, we also have ushers to ensure that we respect distances," the rector said.

Grou believes that many of the regular faithful are undoubtedly more fearful of the pandemic. Some people probably prefer to watch mass on television or listen to the radio, he believes.

Aged 78 himself, Grou said he spent the first moments of the crisis in isolation as public health recommended it to people over 70 years old. Since then, he has resumed his duties almost normally, making sure to respect the imposed protocols.

"Whether you are 78 or 38, you have to put on a mask in public, you have to follow all the rules, and you must follow them very faithfully. Myself, I respect them like the others,"

This report by The Canadian Press was first published Aug. 9, 2020.