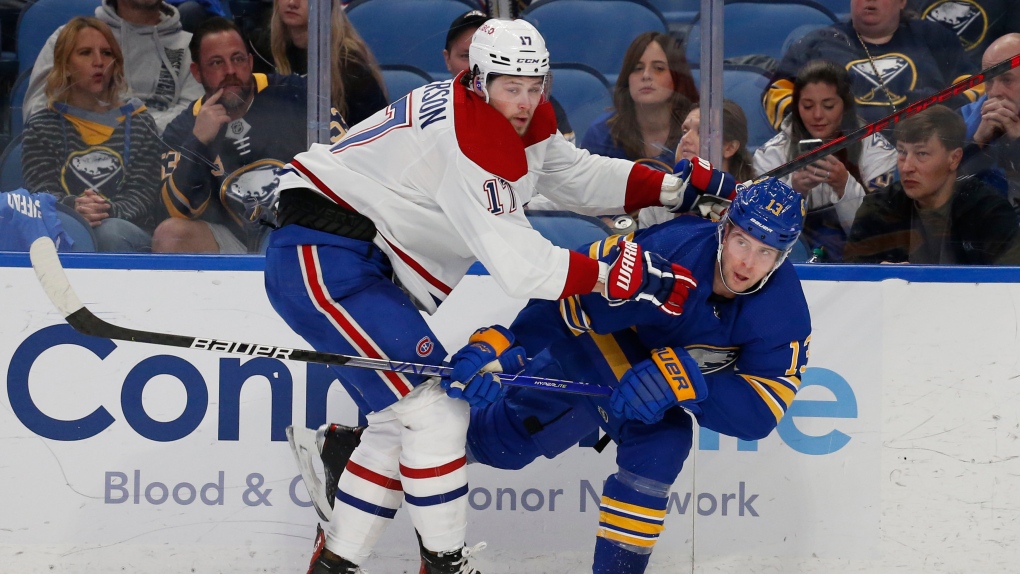 MONTREAL -- For the second night in a row, the Montreal Canadiens lost the game.

The Buffalo Sabres scored three times on the power play and won 5-1 over the Tricolore on Thursday night at KeyBank Center.

Just like the day before in a 2-1 loss to the Toronto Maple Leafs, the Habs shot themselves in the foot with too many penalties at the wrong times.

The Sabres make it 5-1 on the power play.

The Sabres took three of their six power-play opportunities, while Dominique Ducharme's team was 0-for-4.

Chris Wideman, in his first in his new uniform, was the only goal scorer for the Habs (0-2-0). Samuel Montembeault turned aside 31 shots in his 26th NHL start and first with the Tricolore.

For the Sabres (1-0-0), Zemgus Girgensons and Victor Olofsson each had a goal and an assist. Kyle Okposo, Anders Bjork and Tage Thompson also got things going. Colin Miller, Jeff Skinner and Jacob Bryson each had two assists.

The Sabres lost the services of centre Casey Mittelstadt, who made only three appearances on the ice in the second period and did not return to the game in the third. Olofsson also went home early in the third period.

The Habs will play their next game on Saturday when they host the New York Rangers at the Bell Centre.

The Sabres took the lead on their first power play of the game.

Moments after Anderson frustrated Jake Evans on a breakaway, Okposo beat Montembeault with a good shot from close range at 6:40.

Okposo had an inspired first period. He taunted Joel Armia a little later and made the pass to Cody Eakin, but Montembeault made the save.

Montembeault was beaten again by Okposo late in the first period, but the puck hit the post.

Moments later, the Sabres extended their lead with 2:25 to go in the first period. Miller unleashed a shot from the point that Girgensons deflected, catching Montembeault off guard.

The Habs finally got some momentum going in the second period with some good power play moments. This eventually led to Wideman's goal at 9:33, off a nice pass from Armia.

But once again, the parade continued in the visiting team's penalty box and the Sabres took advantage of it to restore their two-goal lead.

Olofsson beat Montembeault on the power play with 2:55 to go in the second, moving the ropes with a good wrist shot.

Bjork then hurt the Tricolore by making it 4-1 with 56 seconds left in the second frame.

The Sabres added to their lead 4:29 into the third period when Thompson scored on the power play.

The rest of the game was a formality.

--This report was first published in French by The Canadian Press on Oct. 14.