Laval police parked a command post outside College Montmorency Friday with hopes to shed light on the shooting that sent four to hospital and pushed the school into lockdown. Meanwhile, Dawson College sent out a memo to students and staff on shooter preparedness, and Quebec's education minister pondered bumping up training in schools.

On Nov. 11, students and staff at College Montmorency were under lockdown for hours after a shooting took place in a green space near the school. Police later told the media they believed the episode might have been gang related, and officers returned to campus Friday to try to learn more.

“The investigators are trying to gather some more information about that day,” said police spokesperson Stephanie Beshara, “and to meet other people who were witnesses.”

Montmorency is one of at least three CEGEPs to declare lockdowns in recent weeks. Just hours before the shooting was called in, a 19-year-old male was arrested wearing a bullet-proof vest at CEGEP de Saint-Jean-sur-Richelieu, west of Montreal. There were no reported injuries.

Days later, at Collège Lionel-Groulx in Sainte-Thérèse, Que., students and staff were told to lock themselves inside as police descended on the school. Fortunately, the police operation was called off because officers didn’t find evidence of criminal activity. 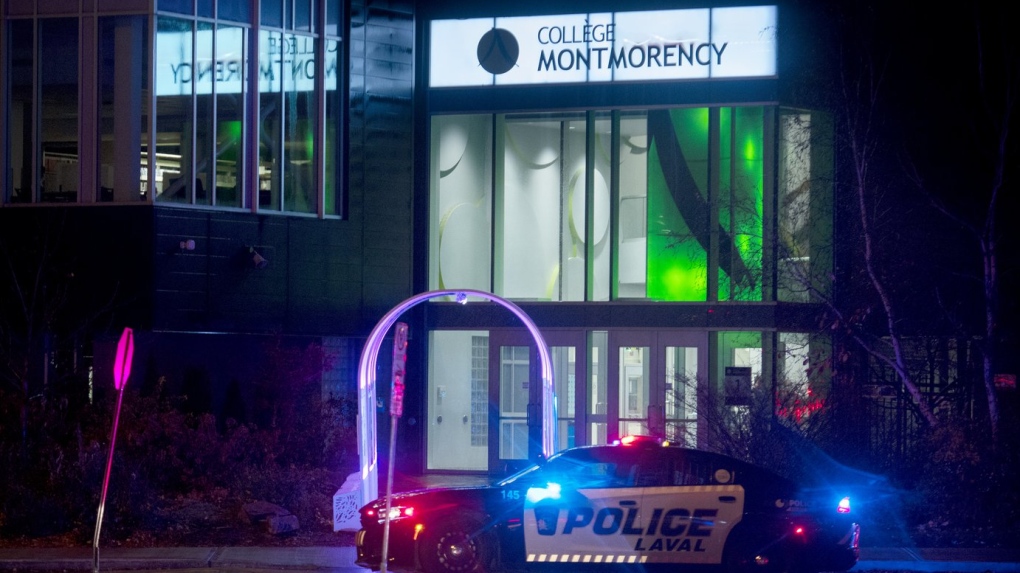 A mobile police command post will be stationed near Laval's Collège Montmorency all day Friday in hopes of advancing the investigation into an attempted murder that led to a lockdown of students and staff on Nov. 11 and sent shockwaves through the community. LA PRESSE CANADIENNE/Graham Hughes

While none of those events resulted in injuries inside the schools, they’ve prompted a feeling of uneasiness across the college system in Quebec, according to Dawson College.

“The entire CEGEP network across the province is concerned regarding the lockdown situations that occurred in recent weeks in Quebec,” Dawson spokesperson Megan Ainscow told CTV in a statement.

CTV News had reached out to the college after receiving a copy of an email sent to students and staff earlier this week. In the email, recipients were encouraged to familiarize themselves with what to do in an active shooter situation.

“Run, if you can, Hide, if you cannot, Fight, if there is no other option” is the mantra included in the email and on the school’s emergency preparedness webpage.

The page instructs students to leave their belongings behind and escape the building as quickly as possible. Tell others to leave too, and help people escape if you can, reads the site.

If you can’t leave, take refuge in a room with a door that can lock, turn off the lights, stay put, and don’t open the door.

If your life is in imminent danger, the site continues, do your best to “incapacitate” the shooter. “Only you can choose to do this,” it reads.

For a full rundown of the school's instructions, click here.

Some students expressed concern that, before the message went out, their colleagues might not have been aware of what to do.

“Every day, you come to school, and you’re like ‘oh maybe something is going to happen like it happened in other colleges’,” said second-year student Eden Dahan, who told CTV she didn’t know the protocol last week.

Michael Kreyzerman, who’s in his first year, said students could benefit from additional training on what to do in an emergency.

“One practice won’t make everyone do it like that,” he said. “It has to be more practice and then people start to know how to act.”

It’s an idea echoed by Quebec’s education minister, Bernard Drainville, on Friday, who told reporters he considered the recent cluster of lockdowns concerning.

Dawson’s student union applauded the messaging from the school and says students had come forward with concerns over lockdowns at other CEGEPs.

“They didn’t know exactly what the procedure was at a college,” said Kiana Lalavi on the union’s external affaires file. “There is some training that is given in high schools, but the college setting is very different.”

A new artificial intelligence algorithm created by a Toronto student is helping researchers search the stars for signs of life.