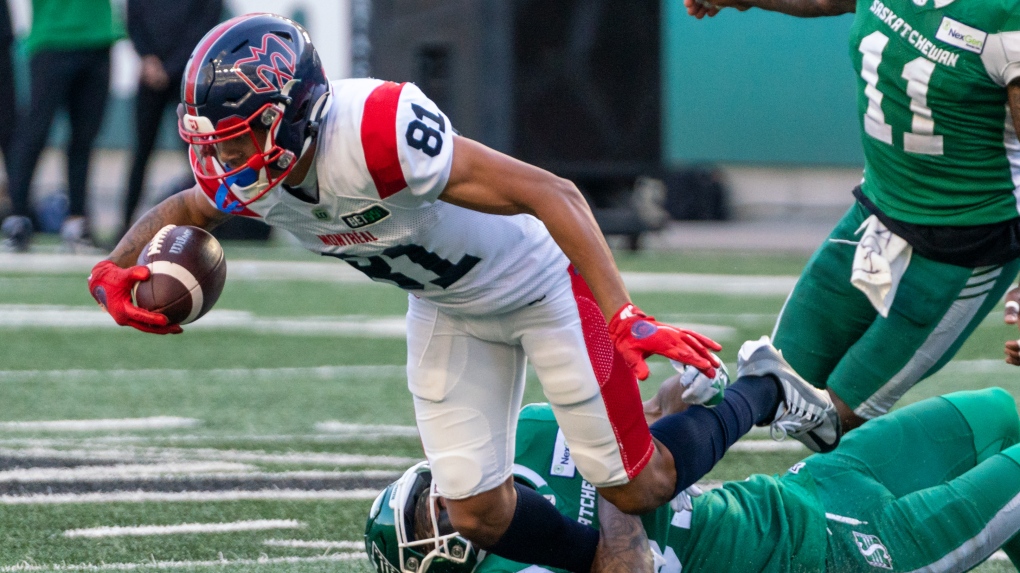 What a difference a week made for the Saskatchewan Roughriders.

One week after getting trounced 37-13 by the Alouettes in Montreal, the Riders returned home to Mosaic Stadium and gained a measure of revenge with a 41-20 victory over the Quebec-based squad on Saturday.

The Riders struggled in the June 13 loss, playing their second road game in five days and travelling across the country with just one day of practice under their belts. Saturday's game didn't start much better as the Riders trailed 13-11 at the half.

Montreal head coach Khari Jones made an interesting decision to start the second half, a choice that ended up having a serious impact on the game. Jones decided to kick off to start the half and get the wind for the fourth quarter.

Riders quarterback Cody Fajardo interpreted that decision as a sign of disrespect.

"We felt a little disrespected as an offence because they chose to kick off to us again. We took it personally so we went out there and it kind of motivated us on offence. It got us rolling, we drove down the field, scored and kind of gave us the momentum back," said Fajardo.

Saskatchewan scored touchdowns on their first three possessions of the third quarter to take a 32-13 lead. Jamal Morrow, on a 12-yard run, Fajardo, on a one-yard quarterback sneak, and Kian Schaeffer-Baker, on a 44-yard reception, scored the Saskatchewan majors.

The Riders have been dealing with injury problems on offence. They lost centre Dan Clark and receiver Shaq Evans earlier in the season and a number of players were nicked up in Saturday's game, including receiver Duke Williams.

Left with a large number of new starters, the Saskatchewan coaching staff decided to stick to the basics in the second half.

"We got really simple on offence. And I think if you look at our team and our offence especially, I don't think there's maybe three guys on the offence right now that have had two full seasons as starters," said Fajardo.

" … Being simple and just playing fast sometimes helps and Coach Maas did a great job of simplifying our game plan," said Fajardo. "We went out there and we executed really well."

"One thing we talked about at halftime was to play the way we're capable of and see what the score is at the end. … I challenged them specifically at halftime -- `Show me your character the second half and win, lose or draw, play as hard as you can and leave it all out there.' They came out and really did a good job," said Dickenson.

Morrow had an impressive game, gaining 103 yards on 16 carries. It was Morrow's second 100-yard game of the season after he posted 126 yards rushing on 17 carries in a 26-16 victory over the Edmonton Elks on June 18.

Cornerback Nick Marshall sealed the victory for the Riders with a 90-yard interception return for a touchdown with four minutes left in the fourth quarter. Fajardo connected with Morrow on a two-point convert to increase Saskatchewan's lead to 41-20.

The Riders also got an eight-yard touchdown reception from Mitchell Picton in the first quarter. Kicker Brett Lauther added a 57-yard field goal, an effort that tied his career best. Punter Kaare Vedvik had a 41-yard single.

The Riders had six sacks on the day with Anthony Lanier leading the charge with three. Pete Robertson, with two, and AC Leonard, with one, also had sacks for the Riders. Robertson leads the CFL with seven sacks.

Walter Fletcher, who took over at running back after Montreal starter Jeshrun Antwi was injured early in the second half, scored on a three-yard run midway through the third quarter. David Cote had two field goals for Montreal, connecting from 18 and 38 yards.

It was a penalty-filled game with Saskatchewan taking 16 penalties for 155 yards, while Montreal had 12 penalties for 105 yards. Montreal defensive lineman Michael Wakefield was ejected from the game midway through the third quarter after taking his second misconduct penalty of the game.

When asked if there was a lot of animosity on the field on Saturday, Riders offensive lineman Logan Ferland delivered a sharp reply.

"Absolutely. I mean, we had some payback, we were getting chirped quite a bit last game so it felt really good to get them back," said Ferland.

The 3-1 Riders return to action on July 8 when they host the Ottawa Redblacks. The 1-3 Alouettes head into their bye week before hosting the Elks on July 14.

-- This report by The Canadian Press was first published July 2, 2022

Police in Rio de Janeiro on Wednesday were seeking the arrest of six people accused of involvement in stealing 16 artworks together valued at more than 700 million reais (US$139 million), some of which were recovered.