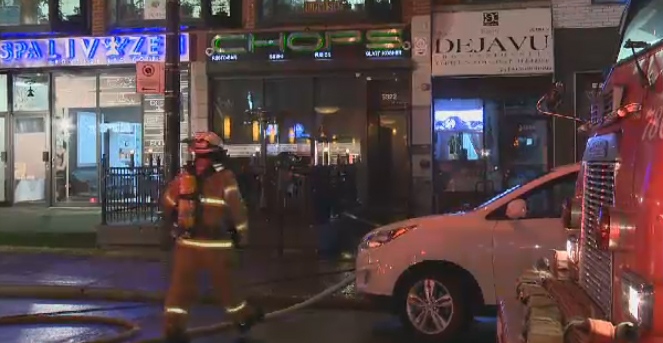 A Molotov cocktail was thrown into this restaurant just after midnight

MONTREAL - A restaurant in Montreal has been the target of a firebombing for the second time in three nights.

Police say there were about 30 people in Chops Resto Bar, a kosher Asian-fusion steakhouse with sushi bar, on Queen Mary Rd. near Decarie Blvd. shortly after midnight when a Molotov cocktail was thrown through the window.

No one was injured and witnesses saw two people running away.

Owner Ouri Ohayon wants to get to the bottom of the incident.

"For the right information to get to these people, to have them arrested, Chops is offering up to $20,000 reward. This is how serious we are about finding these people once and for all," said Ohayon.

A nearby residence was targeted a night earlier and a kosher cafe was hit the night before that.

Though it was a kosher restaurant and the cafe firebombing Friday was at a Café Glatt Casher, a Jewish-owned establishment, the Federation CJA issued a statement Sunday stating: "There is absolutely no evidence that these incidents - while disturbing, to be sure - are in any way motivated by anti-semitism."

The Montreal police arson squad is looking into a possible connection between the firebombings.