There hasn't yet been the influx of Ukrainian refugees to Canada that many expected, but members of Montreal’s Ukrainian community say they are standing by, ready to welcome and support them when they get here.

Most left their country with few possessions, speak neither French nor English and will need help with the basics when they arrive for an average temporary stay of three years.

That includes housing, schooling and the type of orientation required to be able to navigate your way around a new environment – services that community organizations excel at providing.

But they will also need help coping with the emotional weight of war, which can feel as though it is increasing every day. 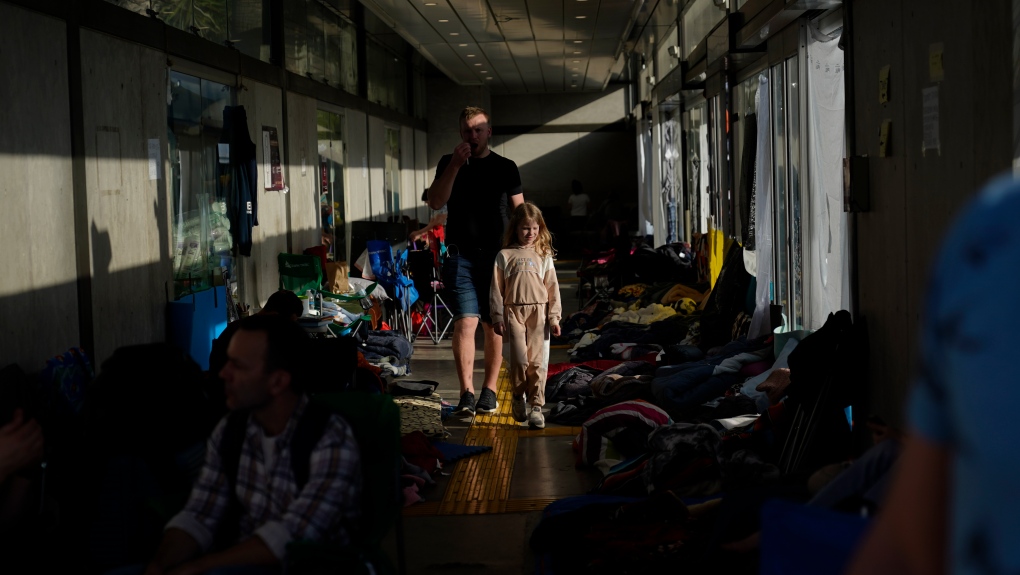 Ukrainian refugees wait in a bus stop near the border after arriving Monday, April 4, 2022, in Tijuana, Mexico, as they look for a way to apply for asylum in the United States. Hundreds of Ukrainian refugees arriving daily have a message for family and friends in Europe: the fastest route to settle in the United States is booking a flight to Mexico. (AP Photo/Gregory Bull)

That burden is something Montreal resident Hagop Kapshanian understands all too well. In 2015, he fled Syria to Lebanon, and then to Canada with his parents and younger sister.

They suffered terror and hardship before managing to escape. His father was kidnapped by opposition forces and released only when they paid a ransom.

Although the family is now thriving in Montreal with Kapshanian finishing up his accounting studies, the experience haunts them all to this day.

“I don't know what they did with my father when they kidnapped him. He doesn't talk. He doesn't want to remember even,” Kapshanian said.

At the beginning of the conflict, Kapshanian was forced into hiding and travelled to Armenia with his older brother to escape conscription into any number of competing factions in Syria who were chasing them down, he said.

“I was in university, and my classmates were with the opposition party, and I have friends with the army," he said. "I didn't want to fight anybody, so I left … I just wanted to have peace.”

It was during that time that his father was taken captive and his sister and mother were left alone and petrified in their hometown of Aleppo, he says, an area devastated by fighting.

The relentless explosions and screeching sirens left his sister with anxiety she still can’t shake, even while walking the streets of Montreal.

“Until now, when my sister sees the firefighter, she's afraid," said Kapshanian. "We call it a phobia." 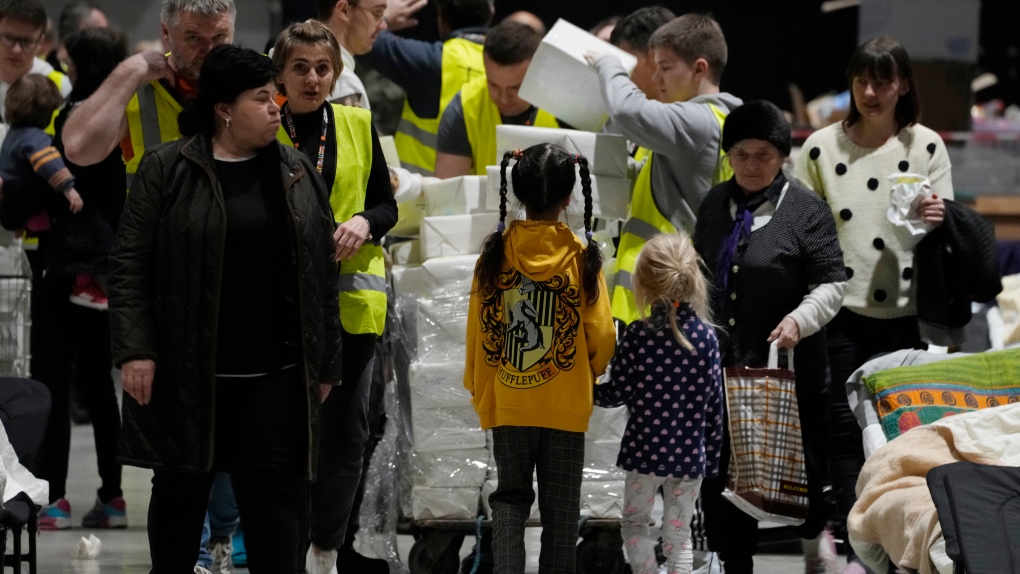 Refugees from around the world face common challenges, but each conflict also creates unique traumas, according to Dr. Cecile Rousseau, a child psychiatrist at the Montreal Children’s Hospital who has specialized in treating "children of war" for 35 years.

Understanding those particularities can help social workers and community organizations tailor the support they offer to the displaced families they meet.

“The question of parental separation is very important, especially in the Ukrainian context," said Rousseau. "Because a lot of women and kids have left the country, leaving their dad, and sometimes uncles and aunts, and other people fighting back."

That keeps the war ever-present, especially for young children. Even after leaving the war zone, it can be hard to redevelop a sense of security.

“Often we conceptualize what's happening to refugee kids as post-traumatic, but if your dad is at war if your mom in some cases is at war and at risk of being killed, it is not post-traumatic, it is traumatic, because the parent or caretaker is constantly worried with news from home,” said the specialist.

These insights are the result of research carried out after the Second World War, Rousseau explained.

“In the evacuation of London, children were brought by train from the heart of London, which was bombed intensely by Germany at the time, to the countryside – and in a sense, they were brought to safety.”

“But the kids who were brought to safety did worse than those who stayed under the bombs with their parents,” she said.

When they dug deeper, experts determined that although parental separation is detrimental for all children, it is especially harmful to toddlers. In the context of the Ukrainian war, it may cause them to feel they’ve been doubly deserted.

“If mom is depressed, if mom is crying all the time because dad is still at war, well, a toddler feels abandoned … they may also feel they’ve done something bad,” said Rousseau.

But there are remedies to help restore some family equilibrium. Mom must get emotional support and occasional relief from caregiving so she can deal with the adult stuff, like immigration paperwork, while the young child gets the smiles, affection, and playtime they need.

Younger children should also be shielded from graphic conversations and overexposure to media images of any disaster, Rousseau said, using Sept. 11, 2001, as an example.

“If a child sees a tower crumble he can understand if you explain to him that something terrible has happened. If he sees the same image 300 times during the same day, he’ll have the impression that something catastrophic is going on and on,” she said.

Older children require more explanations and discussions about events and feelings and a sense of routine, so enrolling them in school is a key step. It’s a child-friendly place where they belong.

Rousseau said schools that are used to integrating refugee students into the classroom know to have realistic expectations of children acclimatizing to a new home.

“When you're arriving from a war-torn country, you may not be available to learn in school,” due to distress or distraction, the child psychiatrist said.

There is also the delicate matter of taking the feelings and experiences of all communities into account in a school setting.

“Remember, in Montreal we have a large Russian community, and these kids can suffer from what is being said about Russia and from being bullied. It’s already happening,” Rousseau said.

The children arriving from Ukraine, however, “may encounter people they identify as belonging to the aggressor group at school.”

“The school’s role is to maintain a kind of peace, dialogue, and not exclude and really maintain the community,” she said so that they don’t “export the war” to the school or neighbourhood. 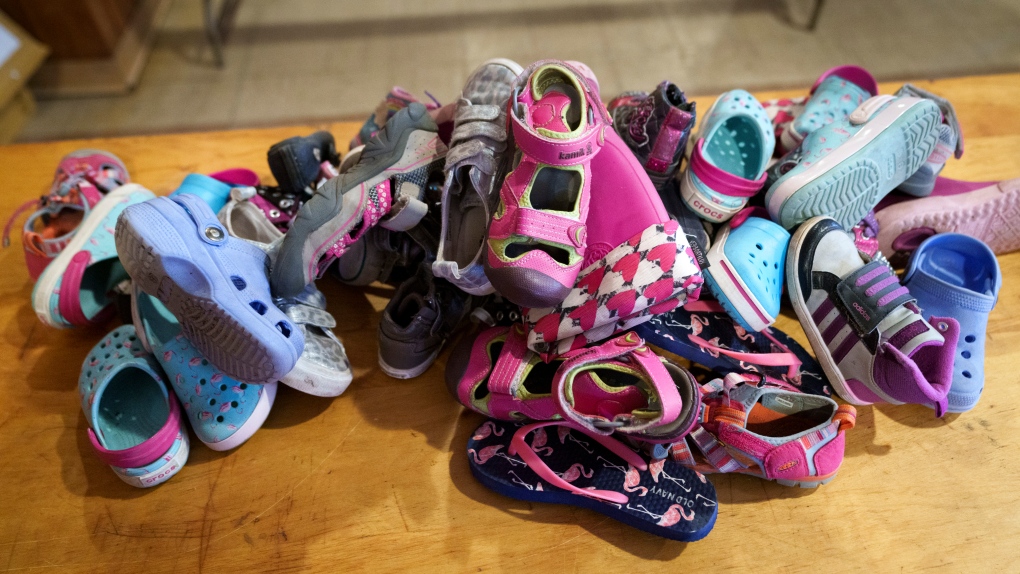 Children's shoes are seen as part of donations destined to Ukraine at the St. Michael's Ukrainian Catholic Church in Montreal on Friday, March 25, 2022. Most goods are destined for overseas while others are needed for refugees arriving in Montreal. THE CANADIAN PRESS/Paul Chiasson

Most people with stress-related reactions, even to the horrors of war, end up having good outcomes with psychological difficulties resolving spontaneously over time.

So while Rousseau doesn't negate the importance of professional help, she said, most people can get through the crisis and trauma without it if they have forged good attachments to friends and family and have support in their lives.

That is borne out by long-term data about refugee resettlement in Canada.

“We have data about the people who came from Vietnam and Cambodia and the news is good. These people, these families are doing well. They are not a burden to our society. This is true also from the Latin American refugees and the waves of Syrian refugees,” Rousseau said.

As far as social integration goes, however, not all refugees are welcomed in the same way, Rousseau said and that can depend on their complexion, culture or religion.

“There is kind of a tendency to have more empathy to people you feel are like you,” the majority, she said.

Meanwhile, those viewed as "other" may be resented, and may "not feel welcome, feel scrutinized and feel like people may think they’re criminal,” Rousseau said.

“I think that, in welcoming the Ukrainian refugees, which is fantastic … there is a need to not forget the others, and to say let's be careful not to just care for people who are like us because we will replicate world inequities."