Recall issued for Jamaican patties that may contain pieces of metal 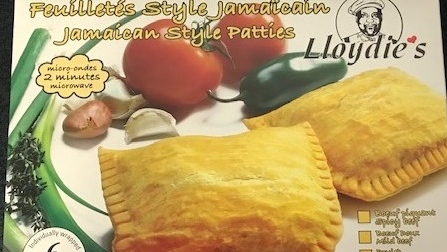 A recall was issued on Tues., Nov. 17, 2020 for Jamaican patties sold by the company Lloydie's. (Photo: Quebec Ministry of Agriculture, Fisheries and Food)

MONTREAL -- A recall has been issued for Jamaican-style pastries that were sold in the Montreal area as they may contain pieces of metal.

The recall was voluntarily issued by the Lloydie's eatery in coordination with the Quebec government and Montreal's Food Inspection Division.

The production in question are labelled “Jamaican-Style Puff Pastry – Vegetables” in the 780 g format. The pastries were on sale until Nov. 17 and were sold at several establishments in Quebec.

Anyone in possession of the product is asked to throw it away or return it to the establishment where they bought it.

No cases of injury or illness have been reported in connection to the pastries.