Alex Wojakowski still has scratches on his face and is walking with a limp after he says he was punched, shoved and had his Winnipeg Jets jersey ripped off while walking home from the Habs game Monday night.

After watching the Montreal Canadiens sweep the series against the Jets at the Bell Centre, the 23-year-old was walking near the intersection of St. Catherine and St. Hubert streets around 11:30 p.m. when a group of about seven men allegedly started verbally harassing him. He said he crossed the street to avoid them, but then suddenly three of them started yelling "give us your jersey, we’re going to burn your jersey."

“Then they rushed me and three of them punched me on the side of the head. One of them pushed me and he scratched me across the face,” he said in an interview Wednesday.

"And then I tried to run to get away, and then one of them grabbed my jersey from the back, and he was trying to rip it off me and they were just really adamant on getting my jersey. So I just said okay, here, take my jersey." 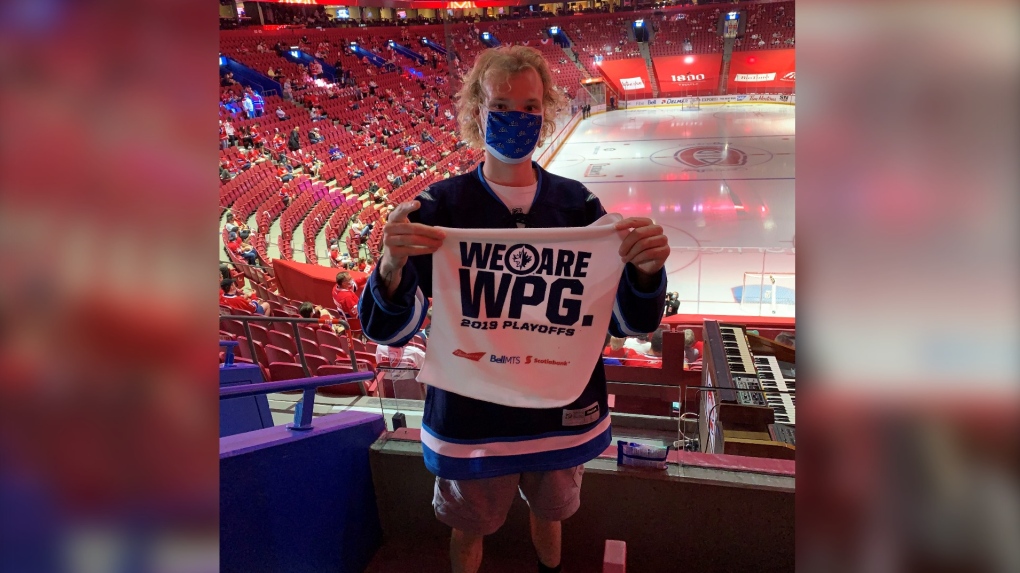 Wojakowski said he’s lived in Montreal since moving here from Winnipeg in the summer of 2019 and while he has faced taunts and nasty comments from other hockey fans for wearing jerseys from other teams (he’s also a Leafs fan), it’s never been violent.

In fact, the teasing he faced before the game was playful. Instagram footage and a photo by a La Presse photographer show Habs fans circling around him and “sweeping” him with brooms during the pre-game excitement outside the Bell Centre.

It was excitement downtown Montreal hasn't really seen in more than a year and after the Habs secured their spot in the semifinals, videos on social media showed the area was turned into a frenzy with thousands of fans gathering cheering, including some who attempted to tip over a Montreal police van and others setting off fireworks in the streets.

But the alleged attack, Wojakowski said, was something he’s never experienced. He said he was still shaking when he went to work the day after.

Immediately after the incident, he said he called Montreal police and spoke with officers to report the alleged assault.

Wojakowski hopes the people responsible will be charged to deter this kind of behaviour and said the ordeal makes him more nervous about going to another game.

“The thought of going to a game now makes me feel like I can’t cheer for the team I want to cheer for or after the game I have to take off my jersey so I don’t get attacked,” he said.

“I think it's really disgusting ... Now that we’re finally getting the privilege to open up and finally attend hockey games and that’s the way Montreal Canadiens fans act against visiting teams fans, that’s disgusting.”

Montreal police told CTV News they received a 911 call around 11:30 p.m. Monday night for an assault on a 23-year-old man who was allegedly assaulted and robbed of his jersey in downtown Montreal. Spokesperson Caroline Chèvrefils said investigators have obtained surveillance camera footage of the incident and are reviewing it. Police have not yet made any arrests.