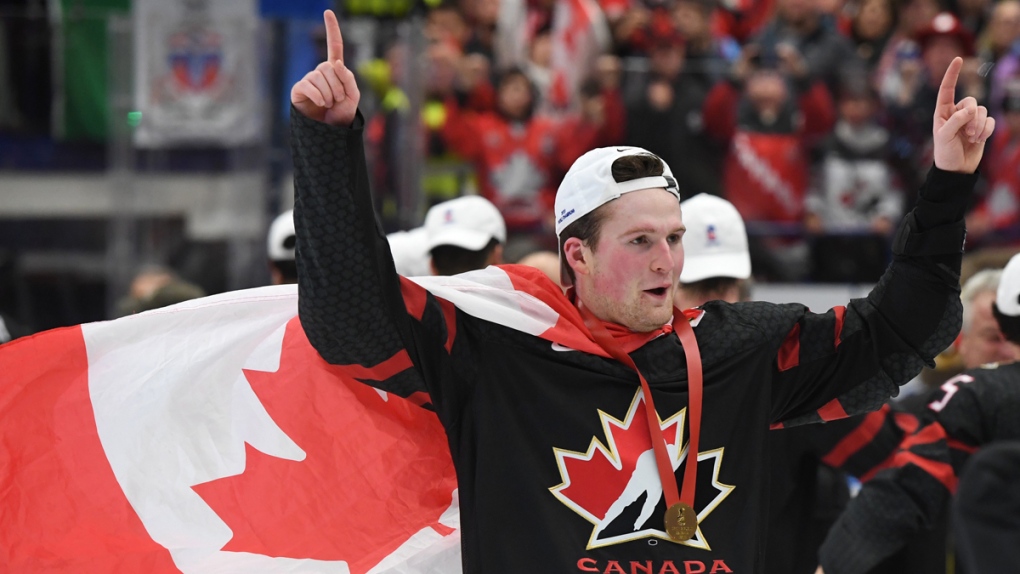 Lafreniere is the presumptive No. 1 pick for the 2020 draft, which is tentatively scheduled for Oct. 9 and 10.

The Rangers had a 12.5 per cent shot of securing the top pick in the second phase Monday after a placeholder secured the No. 1 slot back in June.

They were one of the eight teams to lose out in the qualifying round of the NHL's restart to its pandemic-delayed season included in the second phase of the lottery.

The Los Angeles Kings will choose second, while the Ottawa Senators own the third and fifth picks.

The Detroit Red Wings, who had the best singular odds at winning the lottery the first time around, possess the fourth selection.

New York, which was swept by the Carolina Hurricanes three straight in the best-of-five qualifying round, selected Finnish winner Kaapo Kakko in 2019, and has lots of firepower up front, including Artemi Panarin and Mika Zibanejad.

"Really good news," Lafreniere said on the television broadcast following the lottery. "The Rangers are an unreal team with really good players (and) a really nice city."

The Edmonton Oilers, Florida Panthers, Minnesota Wild, Nashville Predators, Pittsburgh Penguins, Toronto Maple Leafs and Winnipeg Jets were the other franchises in the mix for this year's top pick.

The placeholder team -- designated as Team E -- that won the lottery back in June and set the stage for the Rangers' lottery ball being selected Monday had just a 2.5 per cent shot at the No. 1 pick.

The Los Angeles Kings will choose second, while the Ottawa Senators own the third and fifth selections. The Detroit Red Wings, who had the best singular odds at winning the lottery the first time around, possess the fourth pick.

Selections nine through 15 are based on the regular-season points percentage of the other seven losers in the qualifying round at the time the league's suspended play March 12 because of COVID-19. Minnesota will pick ninth followed by Winnipeg (10th), Nashville (11th) and Florida (12th).

Carolina now owns Toronto's pick -- which was part of the Patrick Marleau trade, but top-10 protected -- and will choose 13th followed by Edmonton at No. 14. Pittsburgh currently holds the 15th pick, but has seven days to decide whether or not it will keep the selection or give it to Minnesota as part of the Jason Zucker deal at February's trade deadline. If the Penguins hold onto the selection, the Wild will get their first-rounder in 2021.

The next 16 spots in the first round of the draft will go by the reverse order of playoff results.

The NHL was originally scheduled to hold the 2020 draft at the Bell Centre in Montreal, not far from Lafreniere's hometown of St-Eustache, Que.

A six-foot-one, 193-pound forward from the Rimouski Oceanic and NHL Central Scouting's top-ranked North American skater, the 18-year-old is the two-time Canadian Hockey League player of the year. Lafreniere had 35 goals and 112 points in 52 games before the Quebec Major Junior Hockey League season was cancelled because of the novel coronavirus outbreak.

Lafreniere also led Canada to gold at the 2020 world junior hockey championship in the Czech Republic, and was named tournament MVP.

Prior to the 2020 draft lottery, no team had ever jumped up more than four spots to pick first, but plenty of teams have beat the odds to get into the top-3. The Philadelphia Flyers went from No. 13 to No. 2 in 2017, the Carolina Hurricanes skipped the line to go from No. 11 to No. 2 in 2018, and the Chicago Blackhawks jumped from No. 12 to No. 3 last year.