A man who was racially profiled by police in Longueuil, Que. is threatening to take the city to court.

He claims the city has failed to collect race-based data on traffic stops as promised. He says he will take legal action if it doesn't provide the information it was tasked to collect by the end of the week.

“I'm furious,” he told CTV. “It's unbelievable that the city and the police force would make a mockery of a judge's order aimed at specifically eliminating racial profiling.”

In 2009, he was stopped and questioned by Longueuil police while driving his son to daycare.

The Quebec Human Rights Tribunal ruled the officers had no reason to pull him over, and that it was based solely on him being Black.

The judgement stipulated the city had to start collecting and publishing race-based data for police stops by 2021. Debellefeuille says there's been no sign Longueuil has done it, and claims the city is defying the ruling. 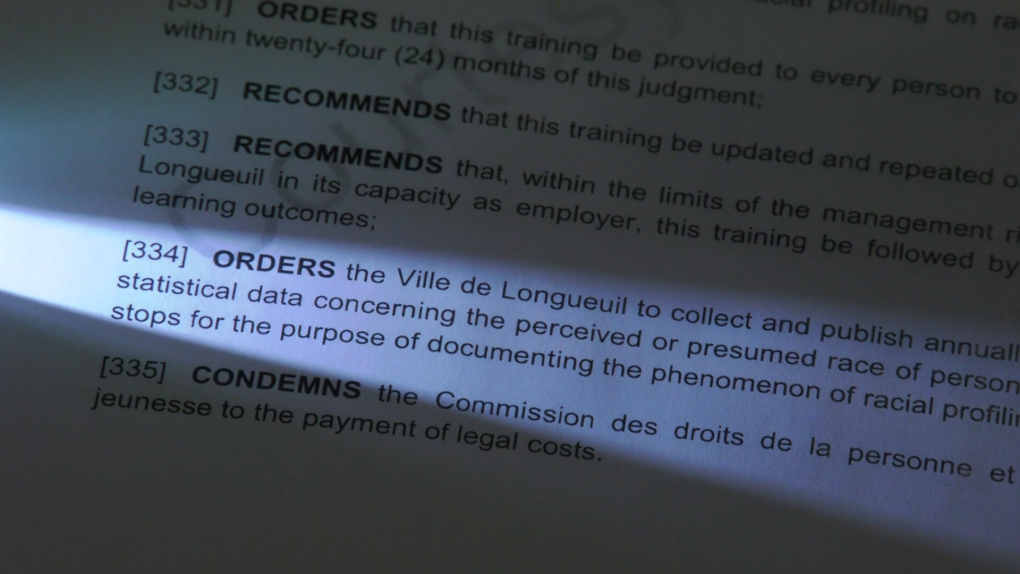 A decision from the Quebec Human Rights Tribunal orders the City of Longueuil to collect race-based police data after Joel Debellefeuille was racially profiled by officers in 2009. (Kelly Greig, CTV News)

CTV reached out to the city, which confirmed the mayor was served, but then re-directed to the police force, which refused to comment since the city had “received a formal notice.”

“If they're going to be a watchdog of our rights in this province there can't just be barking. There has to be some bite,” said Alain Babineau of the Red Coalition, which acts as an advocacy group on matters of racial profiling.

According to advocate Fo Niemi, race-based data is crucial in determining whether a racial group is being targeted by police.

“Race based data is essential in determining among other things if there is disproportionality in the way people are stopped and checked by police,” said Neimi, executive director of the Centre for Research-Action on Race Relations, also known as CRARR.

Debellefeuille says the city has until the end of the week to make the data it was supposed to be collecting public, or else, he's taking the matter to back to court.