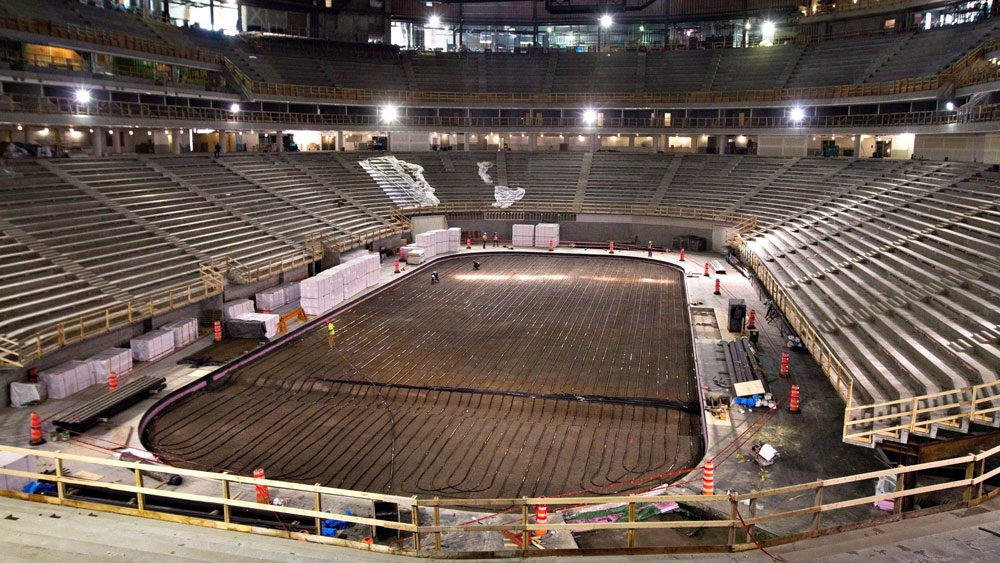 In this Sept. 26, 2014, file photo, work continues on the the Videotron Centre in Quebec City. (Clement Allard / The Canadian Press)

MONTREAL -- The low Canadian dollar will not deter Quebecor Inc. from pursuing its goal of landing a National Hockey League franchise in Quebec City, the media conglomerate's CEO said Wednesday.

The "destination remains the same," Pierre Dion said in a reference to the provincial capital, which has been without a team since the Nordiques left for Colorado in 1995.

"That's where I want to reassure people. But it's true that the reality of the dollar is still there."

Dion admitted to reporters after a business speech he does check the loonie's value on a daily basis.

The dollar has bounced back somewhat in recent weeks against the American dollar, although it lost 1.04 of a U.S. cent Wednesday to close at 75.68.

The NHL has projected the cost of a franchise at a minimum of US$500 million and said the earliest any expansion would happen is the 2017-18 season. Las Vegas is considered the favourite.

"You'd have to ask the league...we're in wait mode," Dion replied when asked whether the league had requested additional information related to Quebecor's bid.

In his speech, Dion made no direct reference to the process, other than to say he was "very happy" with the dollar's recent climb.

On a separate topic, Dion acknowledged that the likely scenario of having no Canadian teams in the NHL playoffs could have a negative impact on TVA Sports, Quebecor's all-sports TV channel.

"I can't hide that," he said. "But our (broadcast) contract is for 12 years. The business plan wasn't drawn up for just one year or two."

He said TVA Sports' commitment remains the same because "Quebecers are crazy about hockey."