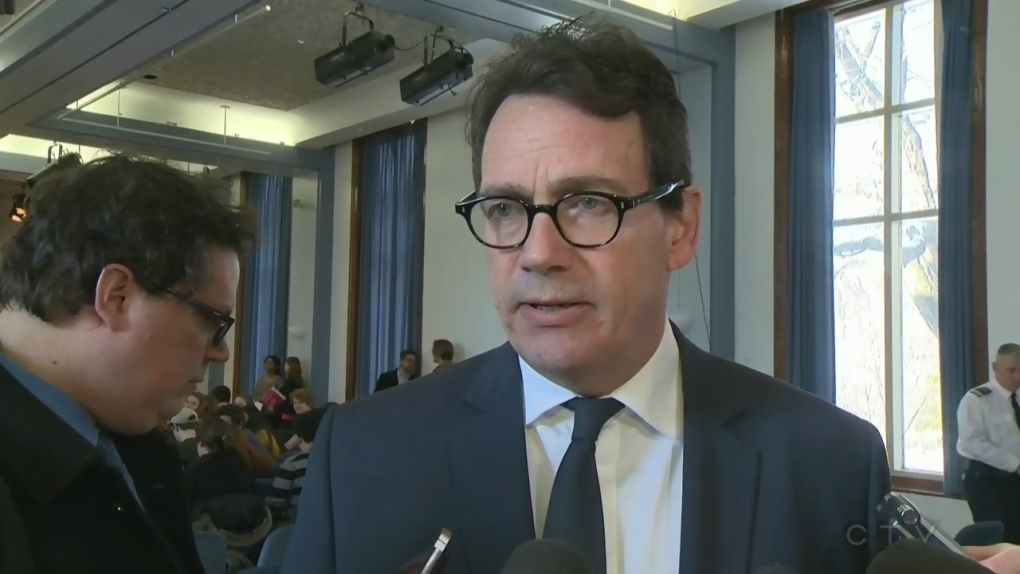 A judge is urging members of Quebec's Peladeau family not to air their dirty laundry in public in a quarrel over Quebecor shares that dates back nearly 20 years.

Anne-Marie Peladeau was in court Tuesday asking her brothers Pierre Karl and Erik to respect a 2000 agreement to buy back her interests in Peladeau Investments Inc.., which controls the Quebec media and telecommunications conglomerate.

A gulf separated the two parties as proceedings opened at the Montreal courthouse before Quebec Superior Court Justice Gerard Dugre.

"The two brothers and the younger sister have to sit in a cubicle and think very hard about what their father (Quebecor founder Pierre Peladeau) would do in such a situation," the judge said. "It's the best solution."

Pierre Karl Peladeau, Quebecor's president and CEO, and his sister attended the hearing but did not speak to each other. Their brother Erik was not present.

Anne-Marie Peladeau was initially seeking $88 million, the estimated current value of the amount contained in the 2000 agreement reached by the parties.

The defence claims that approximately $12 million has already been paid, though not directly to the sister of the Quebecor CEO. Her lawyer, Philippe Trudel, said Tuesday his client would be ready to settle the dispute for an additional $38.5 million instead of the $88 million total initially sought.

Trudel said the Peladeau brothers could pay in two instalments, $15 million now and the balance in two years. The defence proposed that the deadline for payment extend to Dec. 31, 2022.

The judge reminded the two parties that a 2015 Court of Appeal ruling served a "very harsh warning" that the brothers had to find common ground with their sister -- which never happened, leading to the filing of the lawsuit in 2016.

He noted that litigation can often take several years, and the outcome seldom pleases both sides. "If you want to settle this issue for family peace, you have to be ready to compromise," Dugre said. "You have to be in concession mode. Maybe you're not that far away."

Trudel said he was ready to make a "final effort with Mr. Peladeau" so that his client could "enjoy her inheritance while she could."

He said the two sides are not that far apart. "I do not know if it's a question of getting in the last word, but in our case, my client wants to put an end to that."

Francois Fontaine, the lawyer for the Peladeau brothers, said his clients' proposal had the advantage of providing a clear timetable for payment.