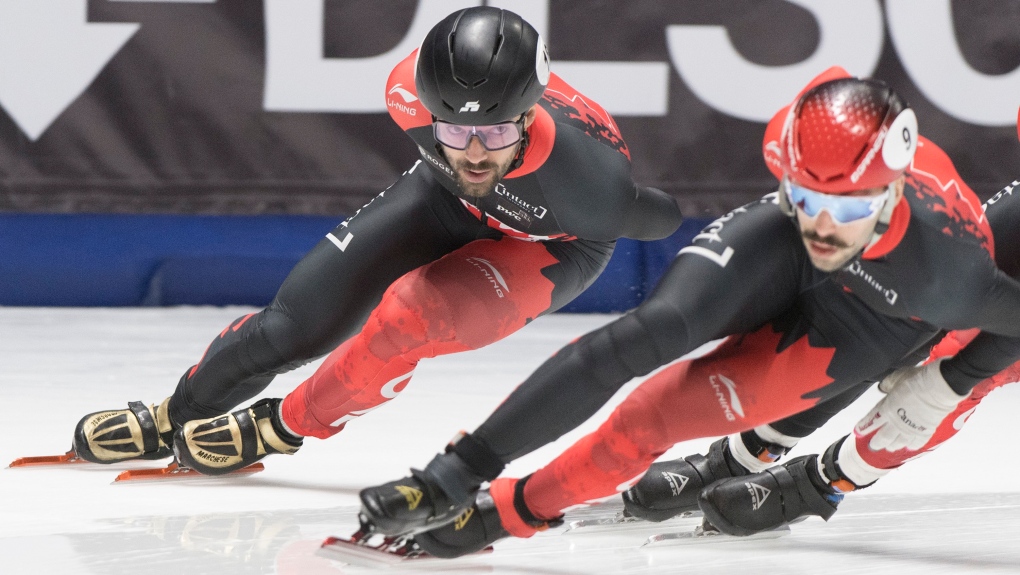 MONTREAL -- Canada's Steven Dubois wants to learn how to win, and he's looking towards one of his biggest rivals for insight.

"He's been at that high level for a while now," Dubois said of Hwang, who is currently fourth in the overall world ranking. "His positioning is always great. He's in shape and he's fast. He knows how to win.

"That's the difference between us right now. I'm getting on podiums but I need to learn how to win the final. That's the next step."

Dubois came in second in the men's 1,500-metre in 2:21.475 behind Hwang in 2:21.140. The 22-year-old was first with three laps remaining before Hwang jumped ahead, taking advantage of a collision between the two other Korean skaters.

The Canadian claimed a second silver medal, this time in the 500, on the final event of the day.

Dubois was third for the entire race before passing Korea's Kim Dagyeom on the inside on the last lap, to the roaring delight of fans at Maurice Richard Arena, but he could not catch Hwang.

"It could have been better," said Dubois of his day. "Two gold medals would have been more fun, but that wasn't my expectation. I wanted to finish in the top three for each distance. So I'm really happy with two silvers."

In front of her hometown crowd, Charles nearly won gold but Korea's Choi Min Jeong overtook her on the final half-lap by going fourth to first. Choi crossed the finish line in 43.684. Charles was right behind, in 43.787.

The Montrealer said she could not fend off the pass.

"I knew it was coming," said the 21-year-old, who earned her first individual medal of the season. "The 500s go by so quickly. The goal is to keep the same pace throughout, knowing the others are coming.

"Could I have held my lane a little better? That's something I need to work on in the coming weeks, the last laps on a 500."

Sarault finished fourth but she was awarded the bronze medal after American Maame Biney was served an arm block penalty.

Charles and Sarault did their best to pick up the slack in the absence of Kim Boutin, who pulled out of the event as a precautionary measure due to tendinitis in her left knee. Boutin has won six individual gold medals in four World Cups this season.

"I have to keep improving," said Sarault, who finished fifth in the 1,500 final. "This is a good competition for this because I can work on my mistakes and really look back at them and try to improve for Germany and Netherlands, the World Cups coming up soon.

It was a less successful day for five-time Canadian Olympic medallist Charles Hamelin, who came close but failed to reach a podium. The veteran finished fourth in the 1,500 final. He was eliminated in the 500 semifinal.

"I made a small positioning mistake in the 1,500 near the end of the race, with five laps to go," explained Hamelin. "And I haven't raced a 500 since last year. I don't train for them. So it was pretty hard. I thought I did OK."

Camille De Serres-Rainville made her return to international competition after suffering an ankle injury late last season. The Montrealer finished last in the women's 1,500 final.

Korea dominated the first day of the event by winning six medals, including four gold.

The finals for the 1,000 and relay races will take place Sunday.

The Four Continents is a brand-new competition on the short-track calendar that features speedskaters from North America, South America and Asia. Athletes from Oceania withdrew from the tournament.

Notes: The next event on the short-track circuit is the European championship in Debrecen, Hungary, beginning Jan. 31. The Canadians have won a total 18 medals on the World Cup circuit this season.

This report by The Canadian Press was first published Jan. 11, 2020.