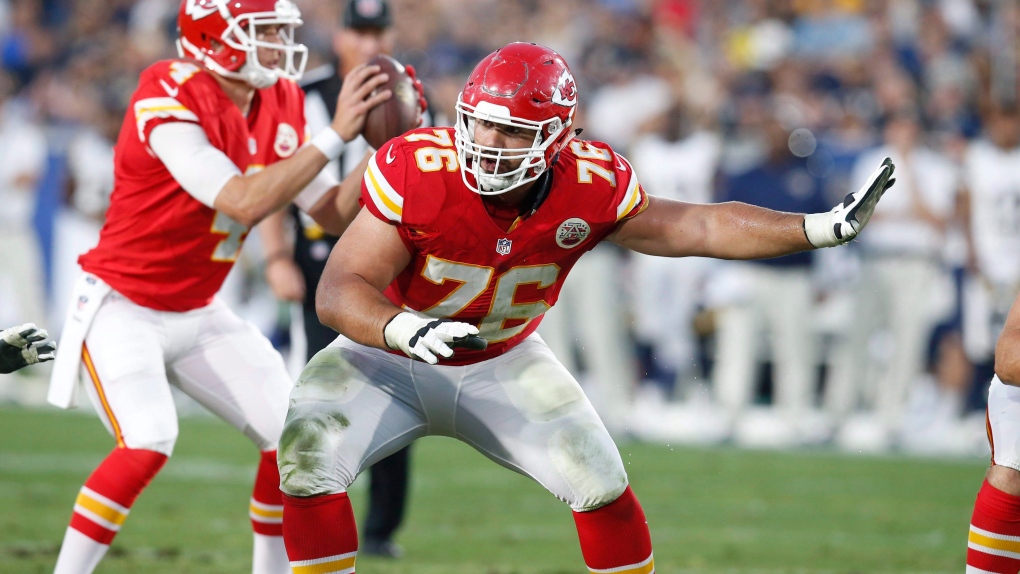 The Super Bowl-winning offensive lineman has no regrets about opting out of the 2020 NFL campaign to help fight the COVID-19 pandemic. But the six-foot-five 321-pound Mont-Saint-Hilaire, Que., native is finding it increasingly difficult to be a fan and definitely plans on resuming his pro career with the Kansas City Chiefs after this season.

"With the (Chiefs) bye week, every day I woke up and thought, 'How did coach manage that week? Are we practising full pads Thursday or Friday? Do we get the weekend off? Are we back Monday like a normal week.?' I feel like it's in my DNA ... I feel like I'm part of this even though I'm not. It's a weird feeling. I'm missing it a lot."

After finishing atop the AFC West with an NFL-best 14-2 record this season, the Chiefs begin their Super Bowl defence Sunday when they host the Cleveland Browns in their first playoff contest.

Duvernay-Tardif helped Kansas City cap last season with a 31-20 Super Bowl win over the San Francisco 49ers. It was the storied franchise's second NFL championship but first in 50 years.

But in July, Duvenay-Tardif - who received his medical degree from McGill in 2018 - became the first NFL player to opt out of the 2020 season due to the COVID-19 pandemic. While others did so for safety reasons, Duvernay-Tardif temporarily hung up his cleats to work as an orderly at a Montreal long-term care facility.

Chiefs head coach Andy Reid - whose mother also graduated from McGill's medical school - and star quarterback Patrick Mahomes were among those to praise Duvernay-Tardif for his decision.

Sports Illustrated named Duvernay-Tardif as one of its Sportspeople of the Year and he was later a co-winner of the Lou Marsh Trophy, given annually to Canada's top athlete.

"I'm 100 per cent sure I made the right call but I feel like maybe people give me too much credit for making that call," he said. "I know what it represents ... but I feel my definition of a hero has changed this year.

"I was very grateful to get those awards but at some point you always feel bad and think, 'Who am I to deserve that?' You look at what you did and it wasn't nearly as much compared to that nurse or that orderly. Ten years from now I'm going to be, 'Wow, 2020 was probably my year and it was amazing to get all that recognition,' but I feel they [front-line workers] are the ones who should get it. They're the people who really deserve it."

Duvernay-Tardif, who turns 30 next month, has taken some time away from the long-term care facility to do work for his foundation as well as towards his master's degree at Harvard. But he's scheduled to receive his COVID-19 vaccination Friday before returning to the facility next week.

Duvernay-Tardif said his experience at the long-term facility has given him a different perspective.

"When I first got into medical school, you do all these different rotations and what you learn is how to treat people with the right medication in order for them to go home and be cured," he said. "In a long-term care facility, people aren't going to go back home.

"At the end of the day it's care, it's comfort, it's dignity and I feel like COVID is just adding another layer to that."

And then there's the impact COVID-related deaths have, not just on affected families, but facility staff.

"While there are people who've worked there for 20 years, there are patients who've been there for 25 years," he said. "When you lose one of those patients through COVID, it's a shock for many people there.

"I was just parachuted in and I'm trying but there's people that build relationships with [patients]. The nurse who's caring for that patient probably has seen more of that patient than their family sometimes over the years and losing them, it's more than just losing a patient."

Duvernay-Tardif has continued working out this year - he actually built an outdoor gym on the roof of his home. The time away from football has really helped him physically.

"I feel like it took me a good six months to fully recover," he said now. "I feel like now I can do stuff that I wasn't able to before.

"I live in front of a mountain in Montreal and I can walk the trails and get all the way up without pain anywhere. That's kind of new for me and it's an awesome feeling."

Duvernay-Tardif worked his way from being an unheralded 2014 sixth-round pick into a starter with a Super Bowl-winning team. Despite having started 57 of 60 career regular-season games with the Chiefs, Duvernay-Tardif understands he'll have to fight to reclaim his spot.

"I feel like I want to use this year to make sure when I go back to Kansas City, whether it's for mini-camp, OTAs or training camp depending on COVID, I'm in better shape than I was last year at that time," he said. "I feel I'm on track to do that.

"There's no point in studying a playbook right now. All I can do is make sure I'm in the best possible shape I can be and then when I get there it will be a matter of fighting for my spot. That's my mindset."

This report by The Canadian Press was first published Jan. 14, 2021.