Around two dozen women stood on the Dufferin Terrace in front of the US Consulate in Quebec City to demand better access to abortion for all women both sides of the border and quality public health services.

Some members of the Regroupement des groupes de femmes de la Capitale-Nationale (RGF-CN) were topless with slogans painted across their torso, including "my uterus, my choice," "my body, my choice," and "the future is feminine," while other women had red painted hands and other symbolic bloodstains on their bodies.

Some women held up coat hangers as a dramatic reminder of the lengths some have gone to historically to perform an abortion. 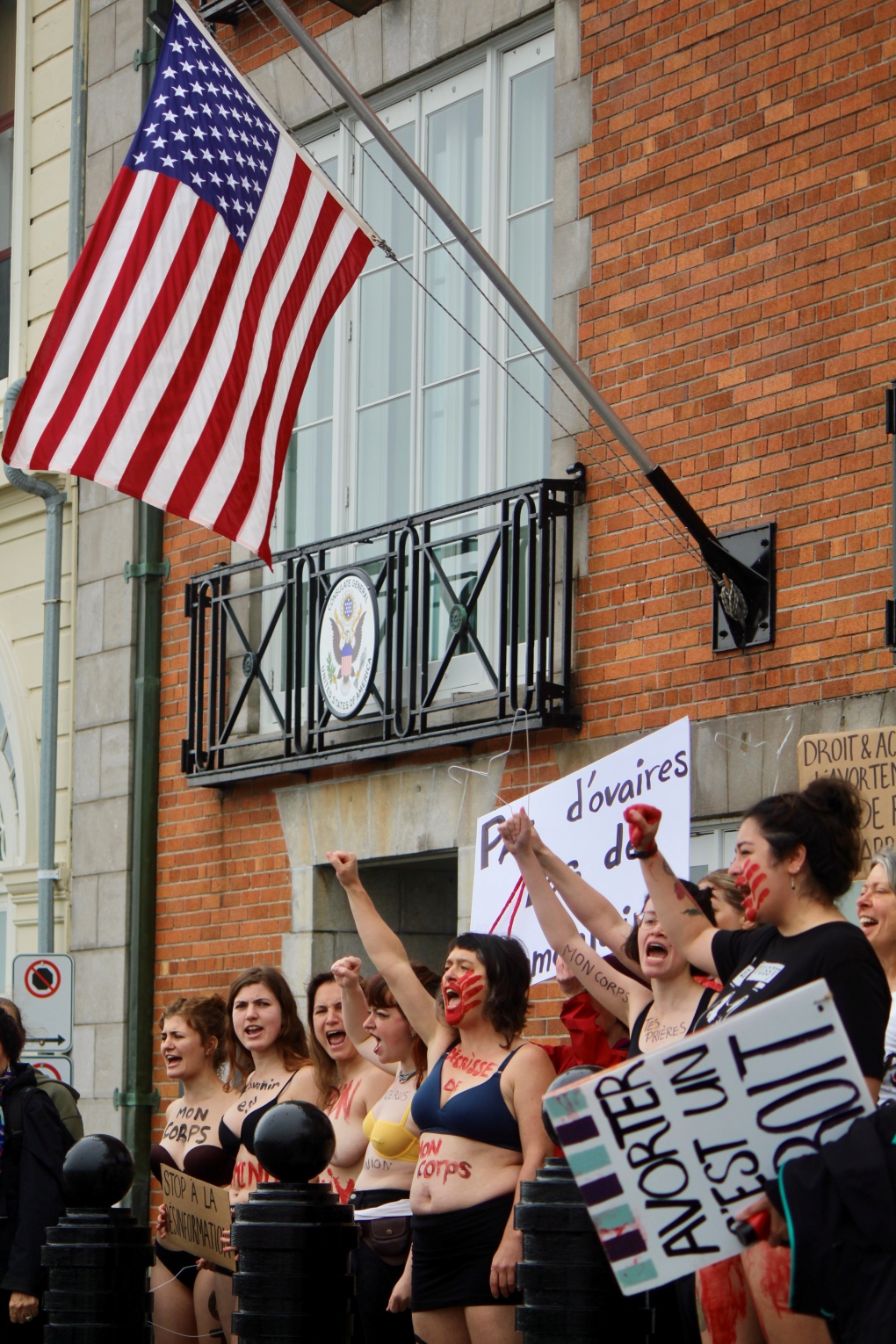 Protesters are demanding better access to abortions in Canada and the US. SOURCE: Regroupement des groupes de femmes de la région de la Capitale-NationaleMay 28 is the International Day of Action for Women's Health and the women wanted to transform "their bodies into political messages in order to recall their right to fully control their bodies and their maternity," according to the group's release.

"With this action, we want to create a strong and powerful image that demonstrates the violence that these attacks on abortion constitute for women and their physical and moral integrity," RGF-CN spokesperson Élise Landriault-Dupont said in the release. "It is their lives that are put in danger when the right to abortion is attacked."

The RGF-CN chose the American consulate after a leaked Supreme Court memo in early May showed the landmark Roe v. Wade ruling affirming the right to abortion will soon be overturned.

"We want to counteract the influence that such a decision could have in Canada," said Landriault-Dupont. "And although there are many attacks on this right here as well, it is important to remember that case law clearly establishes the legitimacy of the right to abortion in Canada."

The group points to wait times, restrictive laws in some provinces, travel distances and unequal access based on residence as issues many women in Canada have accessing safe abortions.

"In the Capitale-Nationale region, there is only one clinic to serve the entire population," the release reads. "The waiting time for an appointment can be as long as four or five weeks. In addition, in Quebec, the non-surgical method (abortion pill) is not easily accessible: waiting times and restrictions imposed by the Collège des médecins du Québec limit its use. 61 per cent of Quebec women are not aware of this option."

About half of Americans say Trump should be charged for U.S. Capitol riot: poll

About half of Americans believe former U.S. President Donald Trump should be charged with a crime for his role in the U.S. Capitol attack on Jan. 6, 2021, a new poll shows.

The Supreme Court of Canada will issue a constitutional ruling today about extensions to Canada's rape shield laws made by the Liberals four years ago.