Quebec wants to make Montreal a hub for electric vehicles 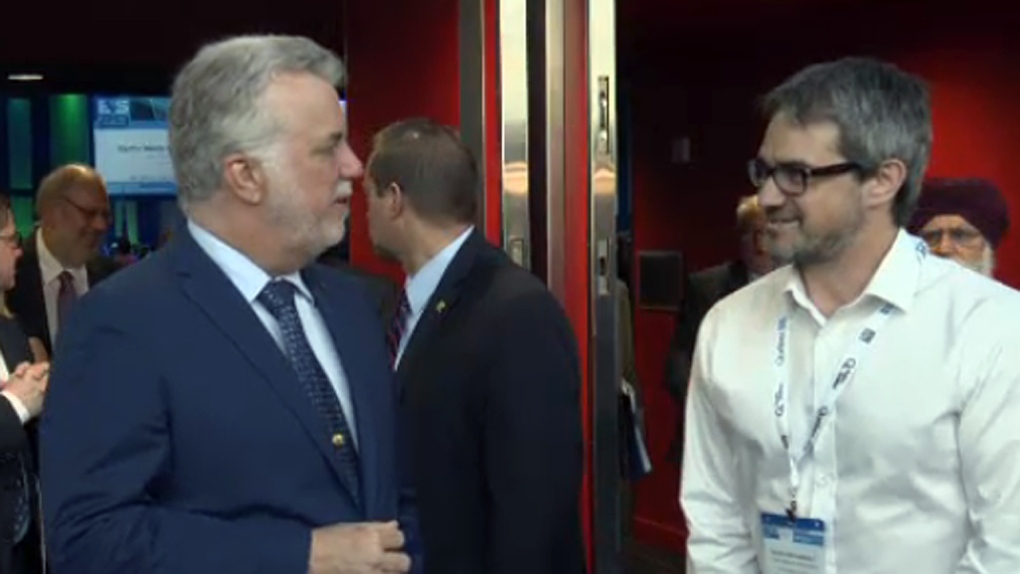 Premier Philippe Couillard talks to a participant at the International Electric Vehicle Symposium on Monday June 20, 2016.

Quebec's government is determined to turn Montreal into a major hub for the electrification of vehicles.

Premier Philippe Couillard promised on Monday that the province would help fund six fast-chargers for electric cars, and that they would be in place within the next six months along Highway 20 between Montreal and Quebec.

"Extending it to Ontario and the northeeastern U.S. is exactly what we need to do in order to meet our objectives," said Couillard.

Couillard made the announcement at the 29th annual International Electric Vehicle Symposium.

Each fast-charging station costs about $60,000, and the provincial government will pay for half.

Private companies which will operate the fast-charging stations will pay the other half of equipment and installation costs.

The province currently has more than 30 400-volt charging stations, with eight Tesla fast-chargers in Drummondville.

There are more than 800 publicly-accessible electric charging stations across Quebec, either part of the Electric Circuit, AddEnergie's FLO network, the Sun Country Highway, and others.

Successive provincial governments have invested in electric vehicle technology, and most recently the Couillard government has introduced legislation to have 15% of vehicles sold in Quebec by 2020 be hybrids or electric.

To that end the government has already promised subsidies for electric cars.

"Since we announced the plan many months ago there ha been a 63% increase in the uptake of electric vehicles in Quebec. We are now at over 10,000," said Couillard.

The group that oversees Quebec's Housing Code is also going to alter it so new construction will be required to have 240 V wiring for car-chargers near the driveway.

"The challenge for us will be the deployment of infrastructure at the same speed as the people will want to make the transition," said Couillard.

The city of Montreal is onboard with a plan for more electric vehicles, last month promising to have 104 electric chargers in the Ville Marie borough by year's end, and 1,000 chargers throughout Montreal by 2020.