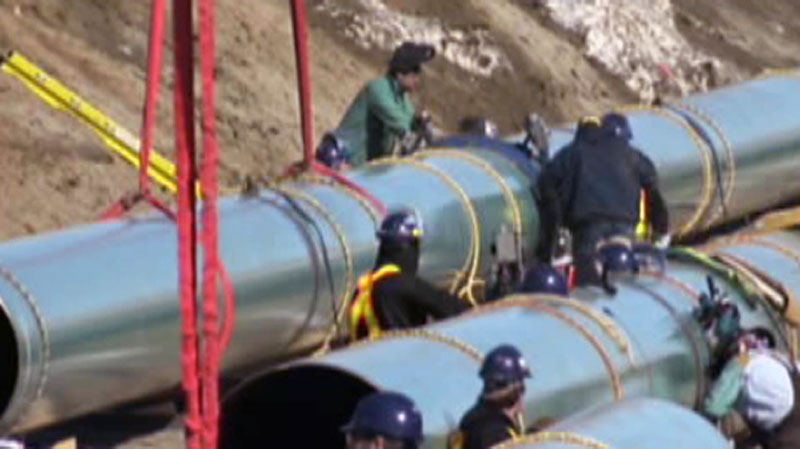 Canada lost out on about $25 billion in oil revenues last year due to pipeline and production bottlenecks and is expected to lose $15 billion a year going forward until it deals with its infrastructure deficit, a new CIBC report says.

QUEBEC--Quebec's new government wants to conduct its own review of a proposed oil pipeline project in addition to the federal one.

The pipeline would reverse the flow of a link already in operation between Montreal and North Westover, Ont. Instead of transporting imported oil into the country, the flow would be reversed to send domestic oil from Western Canada to consumers in Central Canada.

"There will be consultations in Quebec," Cloutier said Wednesday. "The people who are directly involved will be consulted. We will make sure that the environmental regulations and Quebec laws are applied."

The project is being reviewed by the National Energy Board.

In the longer term, Cloutier said the Harper government's plans to decrease the federal role in environmental assessments, outlined in the last budget, could create a void that Quebec might fill.

"The federal government, when it decides to pull out, leaves a vacant space that the Quebec government can decide to take or not, depending on financial and regulatory implications and even in terms of providing public service," Cloutier explained.

"However, it is our wish, our DNA, that every field of jurisdiction be occupied by Quebec."

Environment Minister Daniel Breton, who has concerns about oil spills, said Quebec wants more information on the Enbridge project before deciding to approve it.

"We are in charge of our territory, we must have our say," he said. "It's as simple as that."

Breton said he wants Quebec to participate in hearings by the National Energy Board on the matter. Breton criticized the previous provincial Liberal government for not being more involved in the file, saying they dismissed it because it wasn't their jurisdiction.

"We're going to deal with it because it's a question of protecting the environment on our territory."

Breton said no decision has been made on which provincial agency will be responsible for the consulation but Natural Resources Minister Martine Ouellet said Quebec will pay close attention to the deliberations of the National Energy Board.

"We will have to analyze the impact of the project," she said. "We do not have all the information we need to look at the economic impact, the environmental impacts."

Interim Liberal Leader Jean-Marc Fournier said he's fine with the idea of more environmental monitoring. But he said he hopes the PQ government hasn't already decided against the project.