Quebec to Harper: enough with the ambiguity over abortion 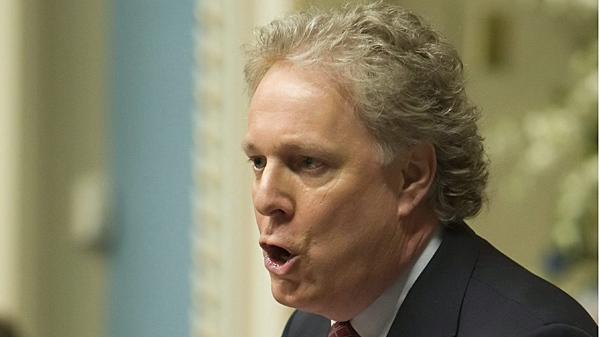 The Quebec legislature has taken aim at the Harper government over abortion and demanded a clear expression of support for a woman's right to choose.

With that, a debate that remained largely dormant in national politics for over two decades suddenly threatened Wednesday to become a federal-provincial issue.

Politicians on both sides of the legislature unanimously adopted, by a margin of 109-0, the pro-choice motion.

The motion demands that the federal government continue to respect free access to abortion, end its "ambiguity" on the issue, and stop cutting funding to women's groups that favour abortion.

A spokesman for Prime Minister Stephen Harper insisted the government would not be drawn into a debate over abortion.

"The prime minister has consistently said throughout his political career, before we formed the government and even after, that our government will not initiate or support legislation that reopens the debate on abortion," said Dimitri Soudas.

While the Harper government has repeatedly promised not to introduce legislation, its refusal to fund abortions as part of a G8 maternal-health initiative is among several recent events that have reopened a debate that was largely absent from federal politics since the late 1980s.

Opponents say they fear a repeat of the strategy being used to kill the gun registry, where a backbench MP introduces a bill with widespread support from the government.

Rod Bruinooge, a Conservative backbencher, has introduced a bill that would penalize anyone who "coerces" a woman into ending her pregnancy against her will.

A Conservative MP, Ken Epp, also tabled a bill that would have made it a separate offence for killing a fetus when a pregnant woman was murdered; the Harper government, however, intervened to block it in 2008.

The abortion issue returned to the forefront with an announcement that, as host of the G8 summit, the Harper government would put maternal health on the agenda. It would not, however, fund initiatives aimed at making abortions safer.

Leaders of the world's G8 and G20 nations are poised to gather next month in Ontario.

The Quebec motion will be transmitted, provincial politicians say, to the federal House of Commons and Senate.

A spokesperson for Commons Speaker Peter Milliken said the move would not automatically provoke a vote in the federal Parliament.

Milliken's office said the provincial Speaker can transfer a copy of the motion to his federal counterpart, who can then send it to a minister responsible for the file if he considers the matter important enough.

Such a process would likely take several days.

Another scenario would see a federal opposition party -- perhaps the Bloc Quebecois -- take up the issue in Parliament.

The government says it still won't bite if that happens. Of the opposition parties, Soudas said, "they just won't take no for an answer, which demonstrates that they just want to politicize the issue."

Irene Mathyssen, the NDP critic on the status of women, said in a telephone interview she wasn't surprised to see the motion from Quebec, where opinion polls have indicated strong support for abortion.

She said the motion would likely make the federal government "nervous" but added, "They tend to dig in in positions they can't extracate themselves from," in an attempt to appeal to a base of supporters.

Mathyssen said the government had cut funding to 14 groups that "were clearly out of step with the government perspective of how the world should work."

She expects one of the opposition parties to table the Quebec motion in the House of Commons, and says it could be done by her or the NDP's sole Quebec MP, Thomas Mulcair.

"That's a very, very strong possibility," she said. "That certainly is a possibility that I will discuss with him."

"That (Quebec's) National Assembly reaffirms the right of women to free choice and to free and accessible abortion services, and asks the federal government and the prime minister of Canada to put an end to the current ambiguity on this issue, and that the National Assembly reaffirms that the fact of supporting women's right to an abortion should not in any case be used by the federal government to cut funding to a women's group."

"I can assure you we respect provincial jurisdiction and we're always happy to receive these unanimous motions from the Quebec national assembly. But as far as federal jurisdiction is concerned, we've been crystal clear on it. It's a motion that this government and this party has addressed years ago."

He also took issue with the contention that the government has cut funding to women's groups, and said funding to such groups was at a historical high.

Asked if that included funding to women's groups that favoured abortion, Soudas said the issue was not a criterion for selection.

"The principle here is making sure that taxpayer dollars actually provide services for women's groups and women's funding."