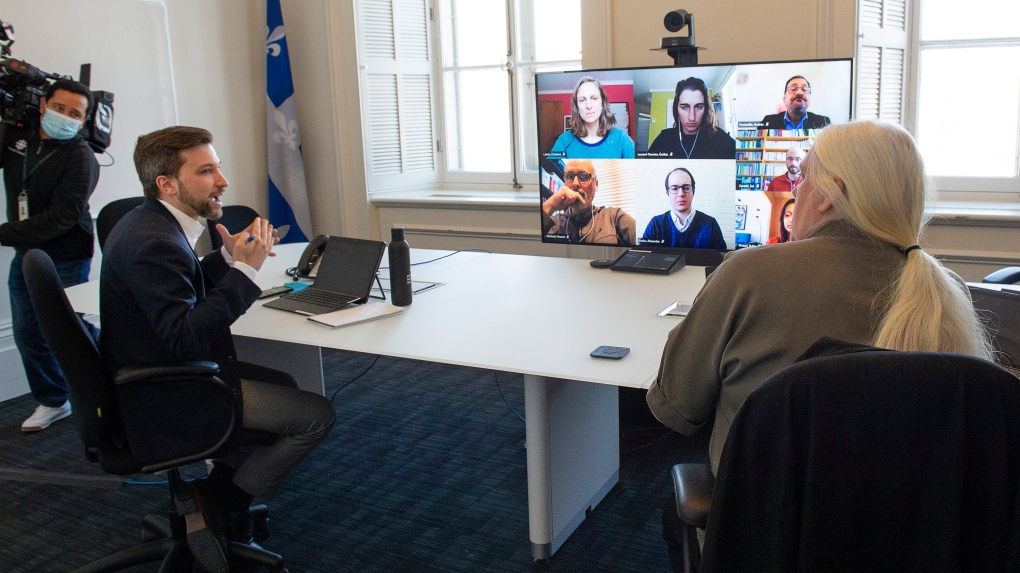 Quebec Solidaire co-spokesperson Manon Masse and co-spokesperson Gabriel Nadeau-Dubois along with the other eight QS MNAs will all run in 2022, as the party gets set to enter campaign mode. THE CANADIAN PRESS/Jacques Boissinot

QUEBEC CITY -- Members of Quebec solidaire voted on Saturday to censure a faction of the party over creating a toxic climate.

The vote to rebuke the anti-racist collective known as CAD came a long virtual debate that was held behind closed doors.

“The members voted with a very clear majority. Activism must be done in accordance with our statutes, principles and values,” said QS co-spokesperson Manon Masse. “It allows us to turn the page.”

For weeks, a feud has been simmering between the QS executive and its CAD, accused of having created a toxic climate within the formation.

The CAD recently sent a formal notice to its own party, claiming to be a victim of "defamation".

A motion of censure was proposed, as the CAD has no "real willingness to collaborate with the rest of the party," the executive says.

In the document, the executive detailed the "history" of the CAD's setbacks.

In recent months, the collective has endorsed controversial University of Ottawa professor Amir Attaran, and associated a journalist with the "extreme right" and the "fascosphere.”

The furor over the CAD's future had some wondering if the censure vote would also be on the party's leadership, a notion that both Masse and her co-spokesperson Gabriel Nadeau-Dubois had downplayed earlier in the day. Nadeau-Dubois in particular argued that it's normal for a democratic party to hold vigorous internal debate.

He compared the situation to that of 2017, when the party considered teaming up with the Parti Quebecois.

“It's a lively debate, so in that sense, it looks like the one we had on the electoral pact,” he said. “There have been other heated debates in QS. It's not the first, it's not the last.”

With the CAD debate behind them, the party is now looking ahead to the 2022 provincial election. Nadeau-Dubois said consensus was reached during the party meeting that the environment would be a pivotal issue during the campaign.

“There is already a certainty emerging that the backbone of the next QS campaign will be the environment,” he said.

-- this report by The Canadian Press was originally published in French on May 15, 2021.