Quebec residents streamed into local streets, packed outdoor concert venues and geared up for a weekend of in-person celebrations on Friday as they marked the provincial holiday of St-Jean Baptiste Day.

The return to public festivities came after two years worth of broad cancellations due to the COVID-19 pandemic, and residents lost no time in getting back into the celebratory spirit.

"We missed celebrating the St-Jean Baptiste Day," Dupont said. "My daughter was so excited to take her outfit out again!" 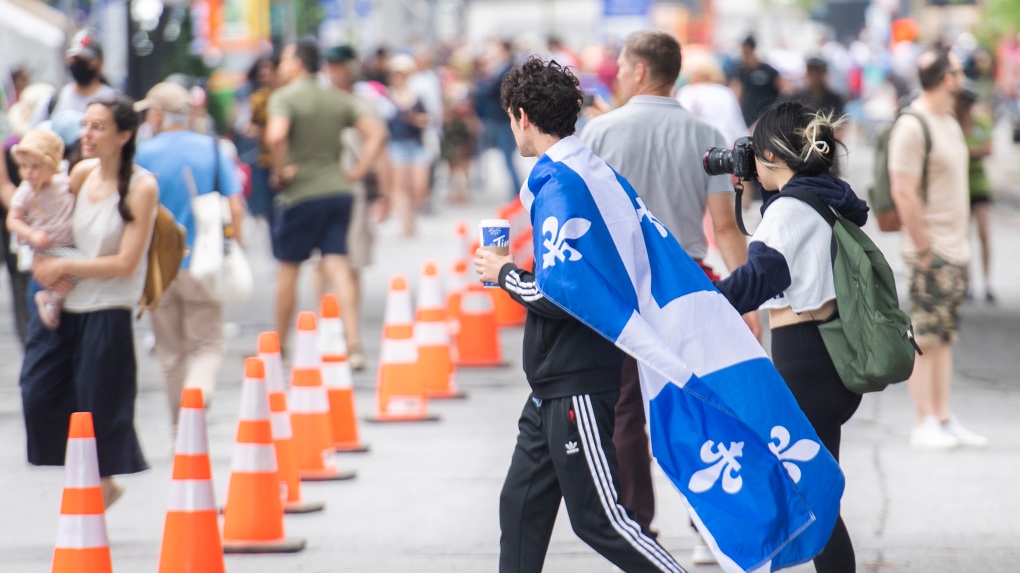 A man wears a Quebec flag as he crosses a street during a Saint-Jean-Baptiste Day event in Montreal, Friday, June 24, 2022. Quebec is celebrating the St-Jean Baptiste Day, its national holiday, for the first time after most festivities were cancelled for the past two years due to COVID-19. THE CANADIAN PRESS/Graham Hughes

Celebrations for the 188th edition of St-Jean Baptiste festivities kicked off with major concerts in Quebec City and Montreal on Thursday evening, where thousands of attendees donned the province's official blue and white colours.

About 5,000 activities across 650 provincial locales have been planned for the long weekend, including several musical performances from prominent Quebec's performers.

Simon Bissonnette, president of organizer Mouvement national des Quebecoises et Quebecois, said this year's holiday feels like a family reunion due to the lifting of public health protocols meant to protect against COVID-19.

"It's a liberation to see people at different sites, without any measures," Bissonnette said.

But this year's celebrations weren't exact clones of past events.

In downtown Montreal, for instance, the traditional parade was replaced with an immersive exhibition of scenes from Quebec's history and culture.

Rather than admiring passing parade floats, attendees were encouraged to circulate among a dozen settings. These included a replica of Quebec's infamous winter complete with real bonfires and the opportunity to roast marshmallows, a traditional sugar shack, and a showcase of photos depicting aspects of the province's history. 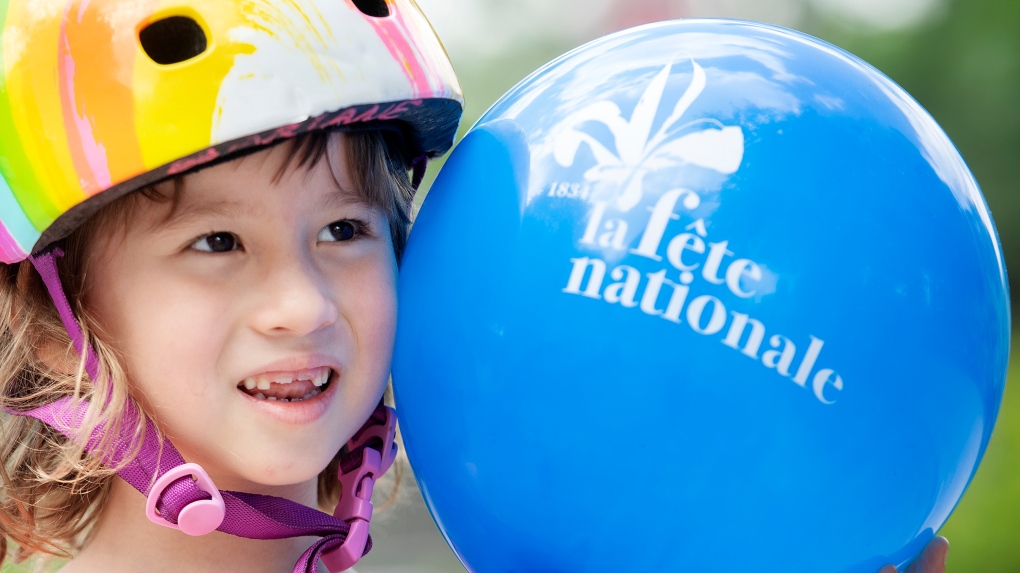 Fiver year old Ariane smiles as she holds a balloon during a Saint-Jean-Baptiste Day event in Montreal, Friday, June 24, 2022. Quebec is celebrating the St-Jean Baptiste Day, its national holiday, for the first time after most festivities were cancelled for the past two years due to COVID-19. THE CANADIAN PRESS/Graham Hughes

Montreal resident Melanie Aubut was all smiles as she watched her seven-year-old daughter run across the street with half her face painted in blue and a "Quebec" tag on her forehead.

"We're also celebrating diversity today," Aubut said. "It's beautiful that we have people with different backgrounds in our city, celebrating together."

She said having the option to walk across the static scenes was perfect to reintroduce the festivities after the pandemic.

"It's less overwhelming or suffocating because there's more space for people," she said. "You can go at your own rhythm, take the time to look."

Simon Dor also took in the sights during an afternoon stroll with family and friends.

"There are several definitions to what it means to be Quebecer," he said. "But we can celebrate no matter what."

Prime Minister Justin Trudeau also issued a statement in which he celebrated his Quebec heritage and touted the province as a leader in equality, justice and democracy.

"As Quebecers, we can be proud of our history and our beautiful French language," Trudeau said on Friday. "These are the roots of a unique culture that binds us together, from Rimouski to Val--d'Or, from Montreal to Sherbrooke."

-- This report by The Canadian Press was first published June 24, 2022, with the financial assistance of the Meta and Canadian Press News Fellowship.