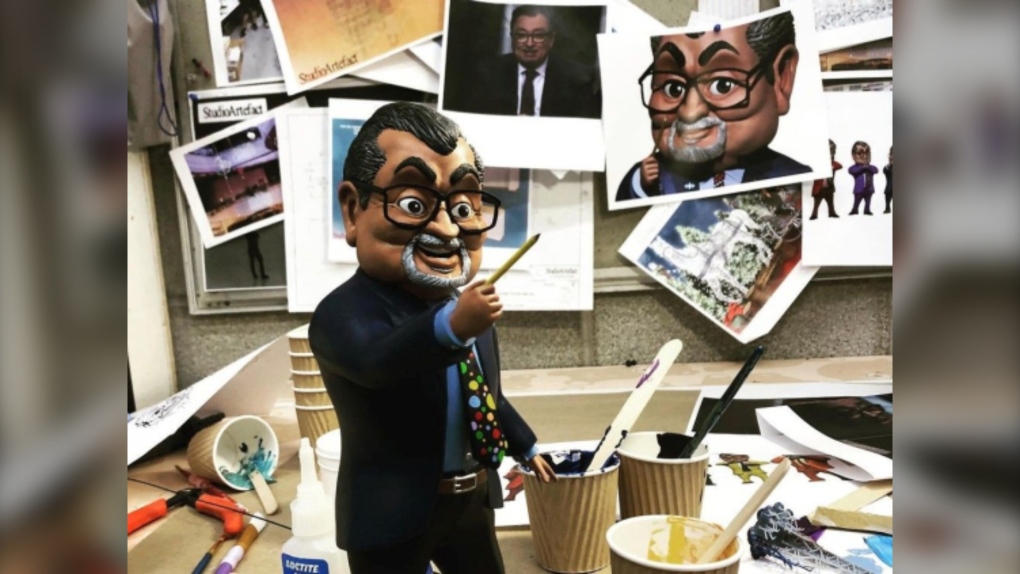 A figurine of Horacio Arruda, the director of Quebec public health, made by Studio Artefact is shown in this undated hand photo posted on the studio's Facebook page. THE CANADIAN PRESS/HO - Facebook, Studio Artefact

QUEBEC CITY, QUE. -- A small figurine of Quebec's director of public health, given to him as recognition for his efforts during the COVID-19 pandemic, will have to be handed over to authorities because it runs contrary to the province's ethics rules, The Canadian Press has learned.

The company's design director, Louis-Philippe Dugre-Thibaudeau, posted on May 8 about the item, calling it "A colourful work for a man who is just as colourful."

But the figurine runs afoul of the province's ethics regulations, exceeding what is deemed "acceptable" according to rules regarding ethics and professional conduct of public administrators.

The province's Health Department came to the conclusion after a week of analysis.

A section of the ethics rules states that public administrators may not accept any gift, hospitality or other advantage other than that of modest value.

"Any other gift ... must be returned to the donor or to the State," the rules read.

The figurine will be handed over to the province and will be displayed at the Health Department's offices, said Marie-Louise Harvey, a spokeswoman for the department.

"The statuette, accompanied by an explanatory note, will therefore be accessible to all employees and visitors," she said.

Arruda, who has been a strong presence in the provinces COVID-19 fight, has received about 20 or so gifts -- most of them handcrafted, Harvey said.

Among them, she said: a hospital gown with his name embroidered on it, face covers, soap in the shape of a tartlet, a T-shirt that read "Courage, it's going to be fine" as well as a "significant" number of children's cards, letters and drawings.

These objects have a value "much more emotional than monetary", the department ruled.

Quebecers can absolutely continue to send gifts, since this is a way to "express their gratitude" to Arruda, who has become an important part of their daily lives.

"Insofar as the gesture is not excessive, the ministry does not see the need to repress these attentions," Harvey said.