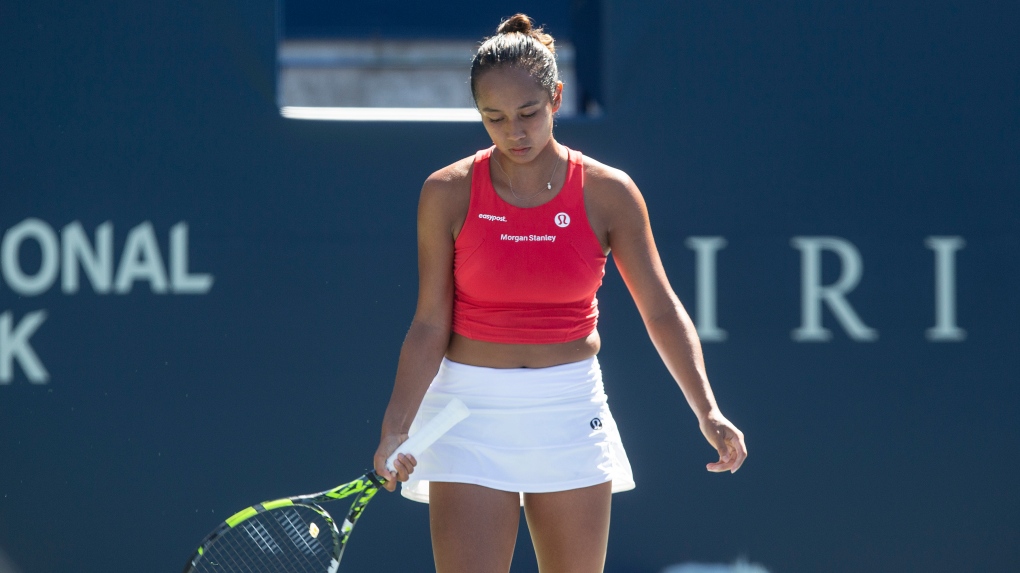 Laval's Leylah Fernandez was eliminated in her first round match at the Cincinnati tournament, losing 6-4, 7-5 to Russian Ekaterina Alexandrova Monday afternoon.

Fernandez, who is seeded 13th and now ranked 14th in the world, got off to a great start in both sets.

However, she was unable to take advantage of her opponent's 14 double faults or her low first serve percentage of 52 per cent. Fernandez's was 66 percent.

Both players recorded three aces each, but Fernandez also committed eight double faults. Fernandez had four service breaks in five opportunities, but only saved two of the eight break points she faced.

In the first set, Fernandez recorded a break in the second game, which helped her build a 3-0 lead. Alexandrova got the break back in the fifth game and then got a second one, without losing a point, in the ninth game.

Alexandrova won the last 12 points of the first set, which she completed in 33 minutes.

The 27-year-old Russian, ranked 27th on the WTA Tour, continued her momentum at the start of the second set by breaking Fernandez's serve in the opening game, once again without dropping a single point.

Fernandez finally came out of her slump and won the next five games, three of them on Alexandrova's serve.

Serving with that 5-1 lead, Fernandez failed to capitalize on two set points, and Alexandrova was able to extend the set with her fourth break of the match.

From there, Alexandrova won 20 of the next 26 points and had two more service breaks that led to the win and a spot in the second round.

Fernandez was playing in only her third match since recovering from a right foot injury sustained during the French Open.

At the National Bank Open last week in Toronto, she needed three sets to eliminate Australian Storm Sanders in the first round. She was eliminated in her next match in two sets of 7-6 (4), 6-1 against eventual finalist Beatriz Haddad Maia of Brazil.

Later Monday, in the men's draw, Denis Shapovalov will cross swords with Grigor Dimitrov of Bulgaria. The two players are ranked 21st and 18th respectively on the ATP rankings.

Felix Auger-Aliassime, the seventh seed, has a first round bye and is scheduled to begin his tournament on Wednesday.

This report by The Canadian Press was first published in French on Aug. 15, 2022.

Hurricane Ian left a path of destruction in southwest Florida, trapping people in flooded homes, damaging the roof of a hospital intensive care unit and knocking out power to 2.5 million people as it dumped rain across the peninsula on Thursday.

A fourth leak on the Nord Stream pipelines has been reported off southern Sweden, the Swedish news agency said Thursday.

Canadians in Florida hunkering down as hurricane Ian lashes the state

Canadians in Florida are hunkering down as the massive Category 4 storm lashes the southwest coast with heavy winds and rain.

Russia will annex 4 regions of Ukraine on Friday

Russia confirmed on Thursday it will formally annex parts of Ukraine where occupied areas held Kremlin-orchestrated 'referendums' on living under Moscow's rule that the Ukrainian government and the West denounced as illegal and rigged.

Hurricane Ian hits the Florida Gulf Coast, 'Diagolon' leader Jeremy MacKenzie is arrested, and 'Gangsta's Paradise' rapper Coolio is dead at 59. Here's what you need to know to start your day.