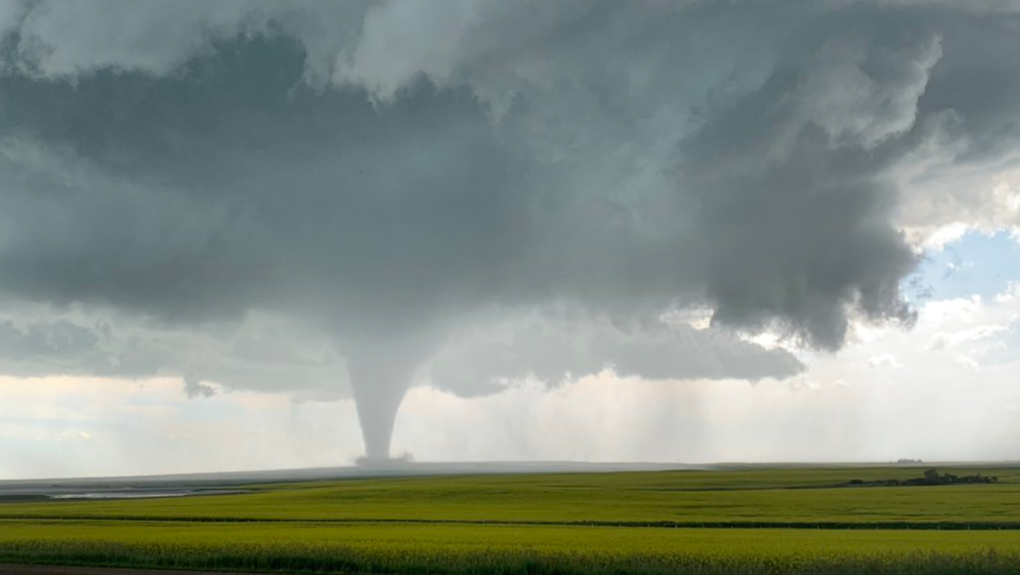 A possible tornado is shown near Kincaid, Sask. during a storm on July 4, 2020. (Courtesy: Meaghan Ryersee)

MONTREAL -- A season of extreme weather is continuing this week with not just another heat wave but a flash flood Wednesday and Quebec's seventh tornado of the season on Tuesday, following two on Monday.

The flash flood happened near Saint-Jean-sur-Richelieu early afternoon on Wednesday after one area got about six centimetres of rain within a couple of hours.

It quickly flooded Seminaire Boul., the major thoroughfare in the town, said a spokesperson for the municipality.

The water suddenly went "halfway up the tires" on people's cars, she said.

Residents started calling the municipal office to report that their basements had flooded. However, by about 2:40 p.m., the street flooding seemed to have mostly subsided.

L'Acadie, near Saint-Jean-sur-Richelieu, has received about 60 mm of rain since noon, causing localized flooding on road sections.#QCstorm pic.twitter.com/GEefY9U7OK

Environment Canada also reported today that yesterday, on July 28, one of the many thunderstorms that swept through Quebec produced a tornado. It was the third in the space of two days, each hitting a different part of the province.

East of Sherbrooke, in Saint-Mathias-de-Bonneterre, Environment Canada meteorologist Antoine Petit told CTV that the tornado uprooted some trees and damaged some structures.

Locals sent photos of the fallout to The Weather Network, which reported "extensive damage" in the area.

"The twister caused significant damage to some homes, also uprooting or snapping several large trees. A playground and baseball field were either partially or completely destroyed," the outlet reported.

That tornado reportedly reached wind speeds of 105 to 135 kilometres per hour.

The other tornado on Monday swept through Saint-Roch-de-Mékinac, north of Shawinigan and Trois-Rivieres. The damage there appeared limited to uprooted trees.

The Tuesday tornado touched down near Armagh, a town east of Quebec City. Meteorologists were able to confirm that it happened with the help of a video sent in by a local resident, said Petit.

That tornado appears to have caused no damage, he said.

"We made a lot of calls today about it, to the Surete du Quebec and some residents in the area, and we didn't find any damage," he said.

AN INCREASE IN TORNADOES, BUT REASONS UNCLEAR

That brought Quebec up to its seventh official tornado of the season, Environment Canada said.

That's abnormally high, said Petit, since the average for Quebec is usually around six tornadoes per year, and the province is already at seven with two months of summer left to go.

Many people tend to chalk up increases in extreme weather to climate change, but with tornadoes it's not that simple, he said.

Environment Canada is often only able to document twisters with the help of citizens' reports, including photos and videos, Petit said. The increase of social media has led to an increase in reporting -- the agency probably misses some tornadoes and was more likely to do so in earlier eras.

"Some happen in some rural areas and we never know," Petit said. "But with social media, it helps a lot."

With apparent increases like the one we're seeing this summer, everyone wants to know why, but those answers could be a long way away, he said.

"It's tricky to put it down to climate change, because we're going to need way more studies [to be able to say that]," he said.