MONTREAL -- The Twitter account of conspiratorial influencer Alexis Cossette-Trudel was suspended on Friday, the same day that several conspiracy theorists from the QAnon movement were also banned from the social network.

Several Twitter accounts linked to the QAnon movement promoted Wednesday's demonstration on the US Capitol, a protest that turned into a deadly insurgency and which prompted Twitter to adopt new measures.

Cossette-Trudel made a name for himself in the French-speaking world by broadcasting videos dedicated to QAnon.

Although it is difficult to summarize the QAnon conspiracy movement, which seems to feed new conspiracy theories every day, the followers of this movement believe in particular that Donald Trump was appointed to save the planet and to imprison the members of a cabal-led pedophile ring, which is said to include several celebrities and politicians who oppose the policies of the outgoing president.

They also believe the "deep state" rigged the last US election in favour of Joe Biden.

In his videos, Cossette-Trudel has repeatedly made links between Prime Minister Justin Trudeau and pedophilia, stating in particular that "everyone around Justin Trudeau is bathed in pedophilia ''.

On his Twitter account, he had been announcing for months that a "storm" would arrive in Washington and that Donald Trump, the hero, would succeed in overturning the election results, would manage to unmask the "deep state" and would imprison those who oppose him without trial.

The coronavirus pandemic has breathed new life into QAnon theories and accounts associated with conspiracy theorist YouTubers like Cossette-Trudel.

He has become a leading figure in the anti-sanitary measures movement by speaking at several anti-mask protests.

In October, Facebook announced that it was removing pages, accounts and groups linked to the American conspiracy movement QAnon. Thus, Cossette-Trudel's account and that of the Radio-Quebec channel he created was closed.

The Canadian Press has not confirmed the identity of the person who created Cossette-Trudel's new profile on Twitter.

QAnon's theories began in the darkest corners of the internet towards the end of 2017. They are based on the alleged posts of an anonymous high-ranking official known as "Q" who allegedly lifted the veil on the so-called deep state in Washington, often linked to Satanism, pedophilia and even cannibalism. 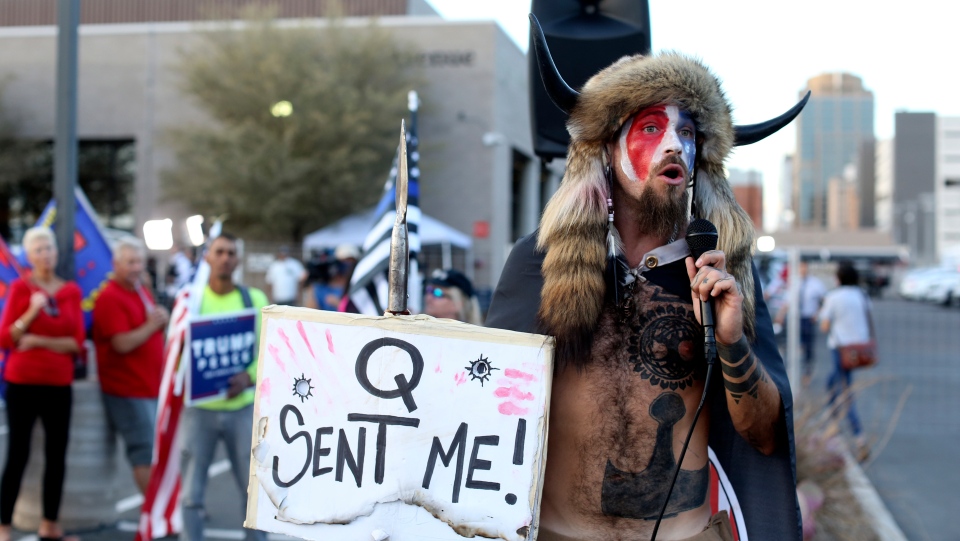 President Trump retweeted accounts promoting QAnon. Followers flock to the rallies of Donald Trump dressed in clothing and hats with QAnon symbols and slogans as seen in videos filmed inside the Capitol during Wednesday's deadly insurgency.

Even though the QAnon movement emerged in late 2017, conspiracy theories claiming Hollywood celebrities and political figures opposed to Donald Trump were part of a vast pedophilia ring were already circulating on social media during the 2016 presidential election campaign.

The most famous of these theories, which is often mentioned by followers of "Q," is "Pizzagate." According to this rambling theory, Hillary Clinton ran a child trafficking ring in the basement of "Comet Ping Pong," a Washington pizzeria.

In Dec. 2016, Edgar Maddison Welch, a 28-year-old North Carolina citizen, went to the Comet Ping Pong pizzeria armed with an assault rifle to, according to what he later said to the police, personally investigate Pizzagate.

Before being quickly arrested by the police, he had used his assault rifle, but no one was injured.

"What happened proves that promoting false and thoughtless conspiracy theories has consequences," the owner of this family-friendly pizzeria, James Alefantis, said in a statement.

In recent years, followers of QAnon have also made headlines for committing violent acts.

One of the most publicized cases is that of Anthony Comello, a 25-year-old man accused of killing a New York mob boss. According to his lawyer, Comello was convinced that he would lift President Trump out of the deep state if he eliminated the mob boss.

In Canada, a heavily armed Manitoban was accused of breaking down a gate at Rideau Hall, near the residences of Prime Minister Justin Trudeau and the Governor General, last summer. Corey Hurren had posted content related to QAnon on social media.