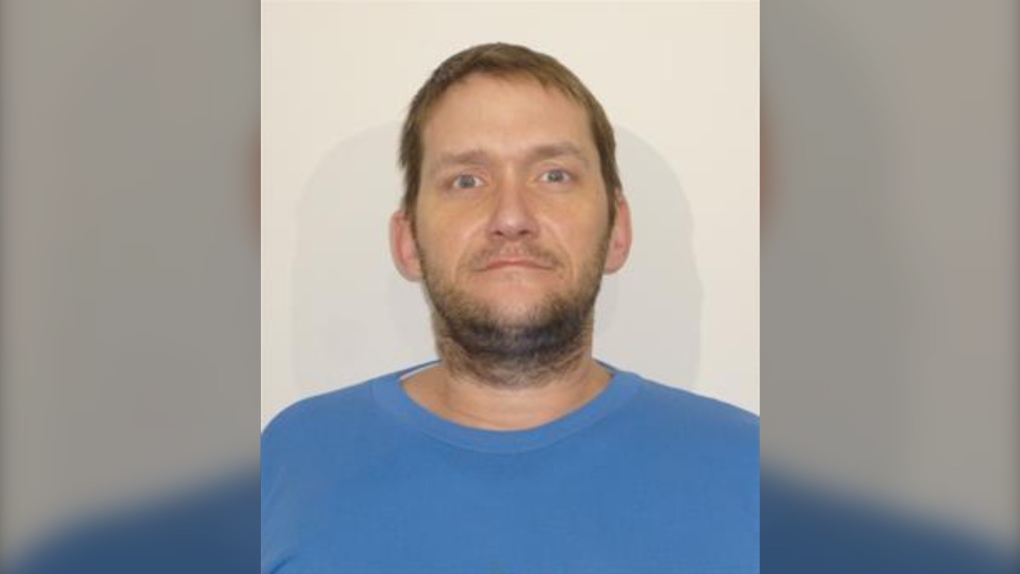 Quebec provincial police (SQ) are asking for the public's help locating 42-year-old Jerome-Vincent Vaillancourt, who is on the run from authorities. (SQ)

Update: Jerome-Vincent Vaillancourt was found in New Brunswick on Aug. 12

Quebec provincial police (SQ) are asking for the public's help locating 42-year-old Jerome-Vincent Vaillancourt, who is on the run from authorities.

He was spotted on Du Phare Ave. west, driving a blue Honda HR-V that had been reported stolen.

Officers attempted to intercept the suspect, but he drove off the road at the intersection of Du Centenaire Ave. and Joseph-Roy St. in St-Ulric. He then fled on foot.

At the time, Vaillancourt was wearing black and carrying a dark-coloured backpack. Police say he could be armed.

He's described as being 6'5" (1.96 m), with chestnut hair and blue eyes. He has tribal tattoos on both arms, a sun tattoo on the left side of his chest and a star on his neck.

The SQ is looking for information related to the movements of the Honda HR-V between Matane and St-Ulric. The license plate number is Z84 MGM.

Anyone who spots Vaillancourt is asked not to approach him and instead call 911.

Any information on his whereabouts can also be reportedly confidentially at 1-800-659-4264.

A study of 1.6 million U.S. patients has found that COVID-19 vaccines and boosters lead to low rates of severe illness and death.

Nike has suspended its partnership with and paused support for Hockey Canada as the sports organization faces increasing pressure to handle alleged sexual assaults.

The Toronto Blue Jays take on the Seattle Mariners Friday in Game 1 of the AL wild-card series at Rogers Centre this weekend. CTVNewsToronto.ca will have live updates throughout the game.

Health Canada says some manufacturers of kids' pain and fever medications are now operating "at double or triple their normal volumes" in an effort to address a months-long shortage.

What are BA.2.75 and BQ 1.1? The two emerging COVID-19 subvariants raising concern among infectious disease experts

Two new subvariants of the Omicron strain of COVID-19 identified in recent months could fuel increased cases and hospitalizations in Canada through the fall and winter, infectious disease experts say.