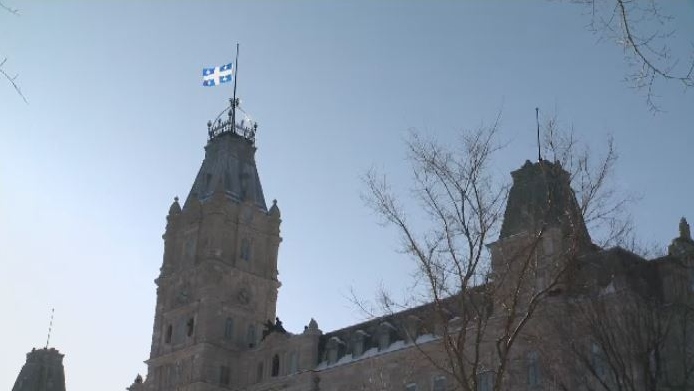 Quebec's flag flew at half-staff Thursday at the National Assembly in Quebec CIty.

MONTREAL -- Quebec Premier Francois Legault shared his condolences with the friends and family of victims of the Ukrainian International Airlines flight that crashed in Iran on Wednesday.

"My thoughts are with the families and loved ones of Quebecers and Canadians who were victims of the terrible plane crash that took place in Iran," Legault said on Twitter.

Legault said he asked that the Quebec flag above the National Assembly be flown at half-staff in honour of the victims. "Our hearts are with their families and loved ones, as well as the Iranian community in Quebec," Legault wrote.

The premier added that in light of the information provided by the federal government Thursday - saying that intelligence suggests the plane crash that killed all 176 people aboard, including 63 Canadians (at least six of them Quebecers) may have been caused by an Iranian missile - "it is essential that light be shed on this terrible tragedy as quickly as possible."

"We support Justin Trudeau in his call for Canada to participate in the investigation and offer consular services to Canadian citizens," Legault said, adding that he thanks the federal government for its collaboration so far.

Legault also said that his government has set up a helpline for grieving families of Quebecers who lost their lives in the crash. Anyone of them needing support can call 1-877-644-4545.