MONTREAL -- Unhappy with their negotiations with the province, nurses from a Quebec union staged protests today to disrupt traffic on the Jacques-Cartier Bridge in Montreal and on the Pont de Québec in Quebec City.

In Montreal, the protest was short-lived after police nixed a plan to march over the bridge. The protest was intended to block only southward traffic, with nurses walking from the Montreal side of the Jacques-Cartier bridge to the South Shore.

Instead, about 100 nurses rallied for about half an hour near the foot of Papineau St., with traffic diverted, and then the protest ended. 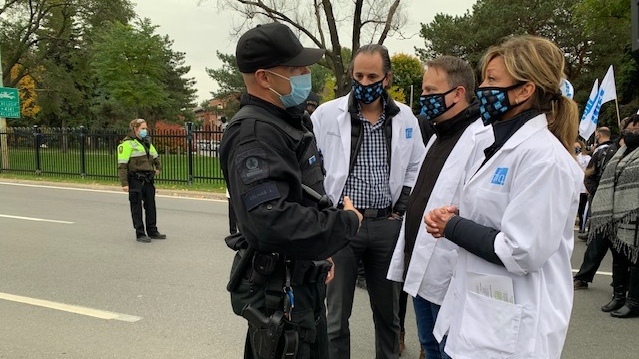 In Quebec City, the FIQ union was planning to block traffic on both sides of the bridge, at the two access ramps, said the union on Monday morning.

Regardless of both protests, emergency vehicles would, however, still be able to circulate, said the union.

The FIQ represents nearly 80,000 health-care workers, including nurses. Their grievances when they first began to negotiate their contract a year ago have only gotten worse, they say.

"We’ve gone through a first phase of a pandemic, a second phase that we’re in, and there’s no real openness at the tables with the government," said the FIQ's Roberto Rocha.

The province's nursing shortage is also getting worse, the union says, because many nurses are quitting to go work for private agencies where they have more control over their working conditions.

However, those private agencies end up contracting nurses to work in the public sector, said Rocha.

"It’s our taxpayers dollars," he said. "We’re paying private agencies to make a profit to manage human resources, health professionals, and return them to the public sector so it makes no sense."

Their collective agreement expired on March 31.

The union's main demands revolve around workload and quality of life.

It wants to see strict nurse-patient ratios established. It also wants the creation of long-term care teams made up of full-time workers, a system it says would allow better work-family balance.

Right now, staffing is often organized by timing, with day, evening and night shifts, for example. 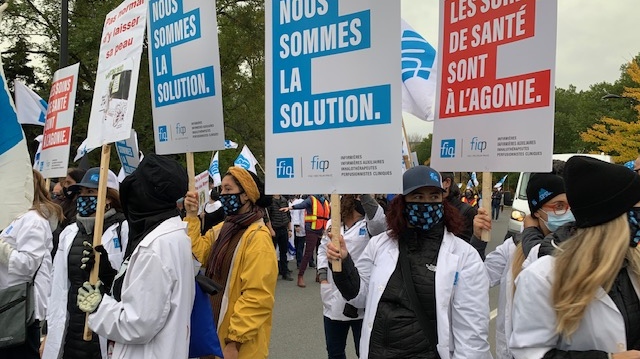 The FIQ's president is calling on the province's health minister to join her for a public debate on the state of Quebec health care.

The health ministry refused to comment. However, the president of Quebec's Treasury Board spoke out on Twitter on Monday, saying she's disappointed the FIQ chose to demonstrate, but that negotiations will continue regardless.