Quebec Public Security Minister Genevieve Guilbault is reviewing the legality of the ‘thin blue line’ patch some Montreal police officers have been spotted wearing on their uniforms, according to a Quebec Solidaire MNA who has urged her to take action.

“They need to intervene and prohibit the use of this symbol,” said the MNA for Laurier Dorion, Andres Fontecilla.

The patch features a black Canadian flag with a blue line running through it.

In an interview with CTV News, Fontecilla said that he received several complaints that the patch was visible on some SPVM uniforms, during demonstrations in Montreal's Jarry Park on Feb. 12. 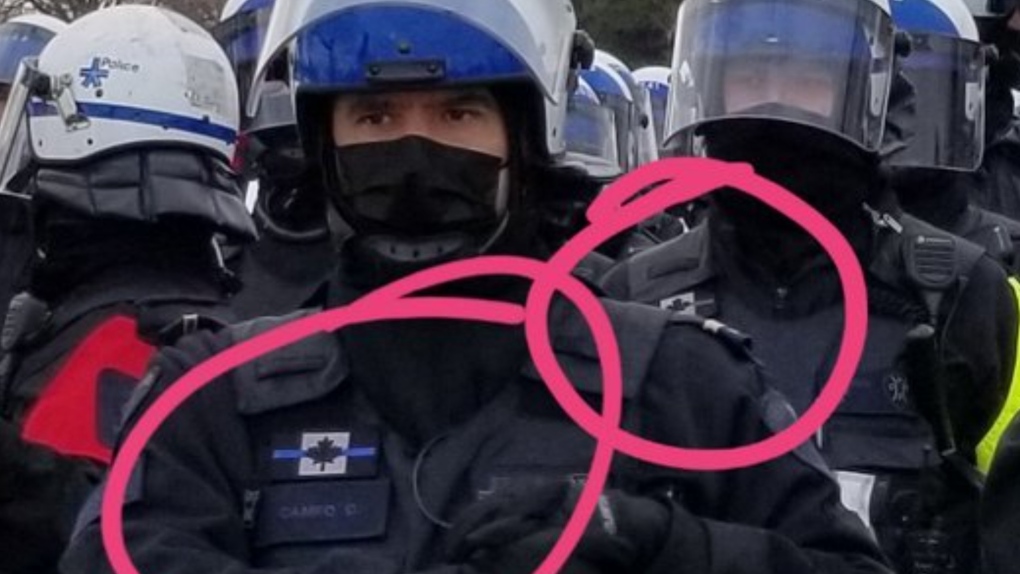 In a letter to Genevieve Guilbault on Feb. 14, Fontecilla wrote the patch is problematic, “since the symbolism evoked by it is rightly or wrongly associated with extreme right-wing movements in various countries, particularly since the Black Lives Matter (BLM) movement.”

"The first thing that came to my mind is, basically, is it a political statement? Is it an expression of something that does not seem to have a consensus in our society as to what it means?" he said.

Montreal mayor Valerie Plante expressed similar concerns at a press conference, stating that she wasn't "comfortable at all with showing something like that."

"I think it's the same for a lot of Montrealers," she added. "It's a sign that divides people."

On Thursday, Fontecilla said that he had spoken with Guilbault that morning and was told she had asked ministry staff “to study the question attentively and it’s possible there may be quick action,” he said.

“I’m waiting to hear more but it seems she takes the subject seriously,” he said.

In his letter, Fontecilla, who is also the public security critic for the second opposition, stated that the patch negates the message of neutrality a police uniform is meant to communicate.

That doesn’t help to improve "the already strained relationship of trust between the police force and racialized communities," he wrote.

However, Fontecilla said, "they are an important and charged symbol, especially among racialized communities.”

And “the crests, according to the current laws, seem to be completely illegal," he explained.

Bill 133, a Quebec law passed in 2017, does prohibit police officers from modifying their uniforms.

It was passed after officers wore camouflage pants, jeans and other non-authorized items while protesting reforms to their pension plans.

CTV News has contacted the SPVM on two occasions to inquire about the ‘thin blue line’ patches, the first time last April, and received the same reply both times.

"A comprehensive review of the Dress and Deportment Procedure, which governs standards for the physical appearance and dress of employees, is currently underway at the Service de police de la Ville de Montréal (SPVM)," police said in an email. "This exercise includes the possible positioning of the Service with respect to the wearing of any insignia, an issue that is being addressed by our ethics committee."

Fontecilla called on Guilbault to ensure that all police officers in Quebec follow uniform-specific directives.

CTV News has also asked Guilbault to respond to the display of the ‘thin blue line’ patch on some SPVM uniforms but has not yet received a reply.