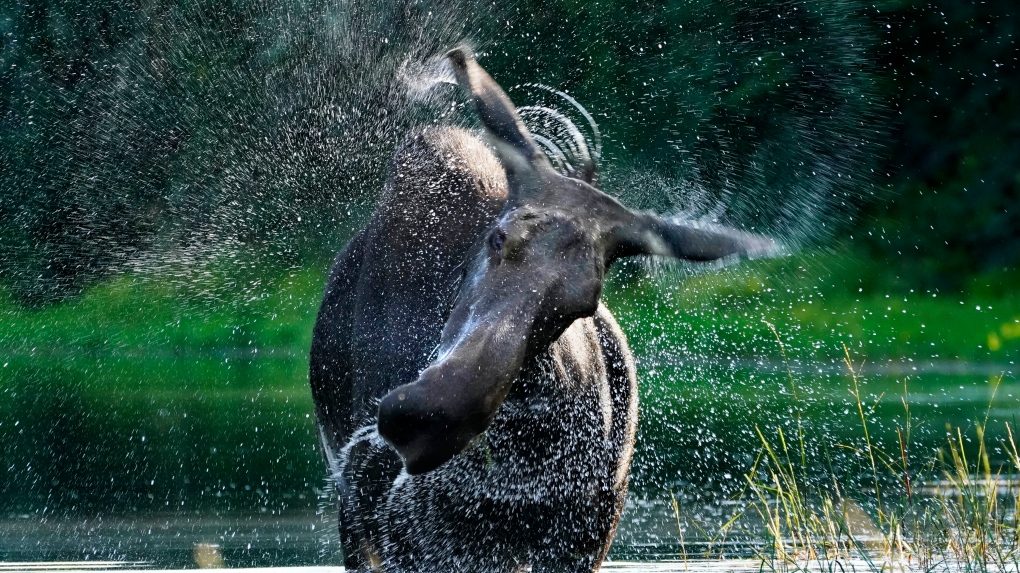 A cow moose shakes water from its fur after pulling its head out of Lobster Stream while feeding on aquatic plants, Thursday, Aug. 13, 2020, in Lobster Township, Maine. Moose are attracted to underwater plants because of their high sodium content. (AP Photo/Robert F. Bukaty)

VAL D'OR, QUE -- Minister of Forests, Wildlife and Parks Pierre Dufour is due to submit a proposal Monday to the Indigenous communities calling for a moratorium on moose hunting in a Quebec wildlife reserve.

Tensions have been ramping up between Anishinabeg communities and La Verendrye wildlife reserve hunters for several days.

Discussions took place on Saturday in Kitigan Zibi, near Maniwaki, between the Anishinabeg leaders and Dufour.

"It was intense, but there are things that should be said to Pierre Dufour. The decline in the moose herd on the reserve is real, and it's just the tip of the iceberg," said Lac Simon Anishnabe councillor Lucien Wabanonik.

Dufour press secretary Carl Charest confirmed that there will indeed be a proposal on the table.

“But there will be no moratorium,” he said. "However, the discussions will enter a new stage today, that's for sure. We think we can get a positive result."

Charest did not want to give more details on the proposal, which will be tabled at the end of Monday afternoon in an attempt to resolve the impasse.

"We are going to do our part, but we are also waiting for the Indigenous people to come a long way," said Charest.

The Anishianbeg are in standby mode.

"We know very well that we too have efforts to make," said Wabanonik. "We also know that we will not obtain a moratorium. We will see what Minister Dufour has to offer us. The minister talks about significant progress, but I don't know if that means the same for him as it does for us."

The Anishinabeg are reminding the minister that the issue is more important than he thinks to their communities.

"For us, the Anishinabeg, the moose is more than an animal that wanders all over the woods," says Wabanonik. "Moose are also a symbol of our culture and our identity. We are asked to stop living in the past, but it is necessary to lose our traditions, to deny our identity? The dams we have erected, do you think we are doing this for fun? It's more than just our pantry."

"The big stake in the file is to find a balance that will be acceptable to all," said Charest. "The hunters have rights, and the Indigenous people too."

For 14 days now, the Anishinabeg communities of Kitigan Zibi, Lac-Barriere and Kitcisakik have erected checkpoints on a dozen forest roads in La Verendrye Wildlife Reserve, and they are blocking access to hunting areas and camps.

-- with files from the Local Journalism Initiative