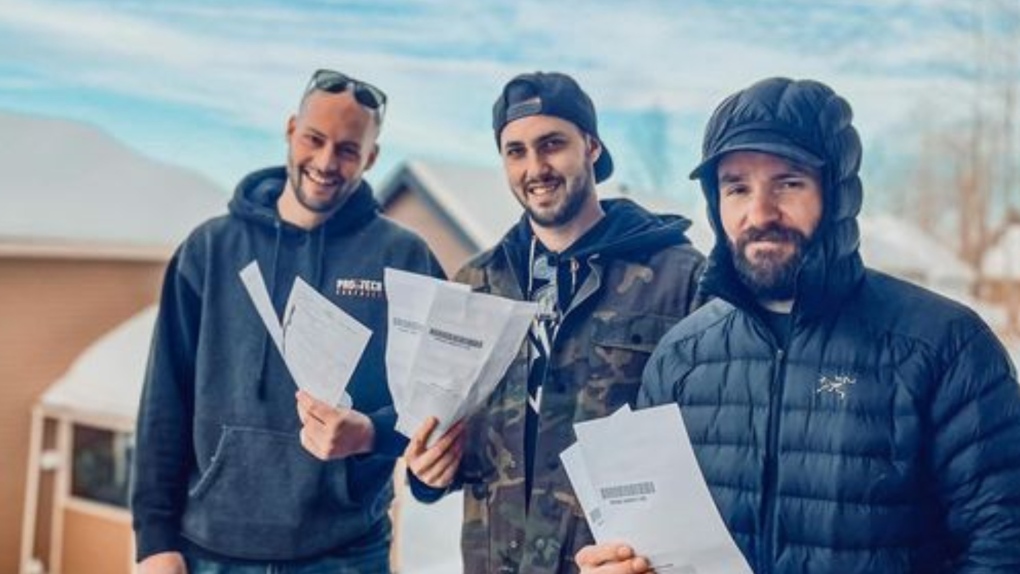 Francis Lambert, 29, with friends after getting fined for gathering around a campfire (Photo: Facebook)

MONTREAL -- An Eastern Townships man says that Quebec's health rules have gone too far -- or rather, that they're too "arbitrary" -- after six people racked up $10,000 in fines for sitting at a two-metre distance around a campfire this weekend.

"There are no words to describe the ridiculousness we are living in right now," said Bromont man Francis Lambert, 29, in a Facebook post on Sunday that has been shared over 8,000 times.

Lambert told CTV News that when police issued the tickets on Sunday, they said the problem wasn't seeing friends face to face outdoors, or the distance the group left between people. It was the fact they met on private property.

"He told me that if we'd been in a public path or public place, there wouldn't have been a problem. It was because it was private land," he said Tuesday.

The six people came from three households, and they decided to "get together outside to enjoy a beautiful day," Lambert wrote on Facebook. The weather on sunny Sunday soared well above freezing.

Three police cars arrived to bust up the gathering, and Lambert said that even the responding police officers kept saying they were uneasy with the penalties.

"They then took several minutes to try and explain to us that they had no choice and that it really wasn't their decisions."

The officers, he wrote, "even confessed to us that they wished they would never answer this kind of call because of the enormous discomfort it causes them."

Under Quebec's rules right now for COVID-19 "red zones," which include all the regions in south-central Quebec except for the Outaouais, gathering at your home with people outside the household is banned, including in the home's outdoor spaces, and with exceptions for a few special cases, such as special rules for single parents.

People may be outdoors in public parks or on public trails, however, as long as they keep two metres from others. 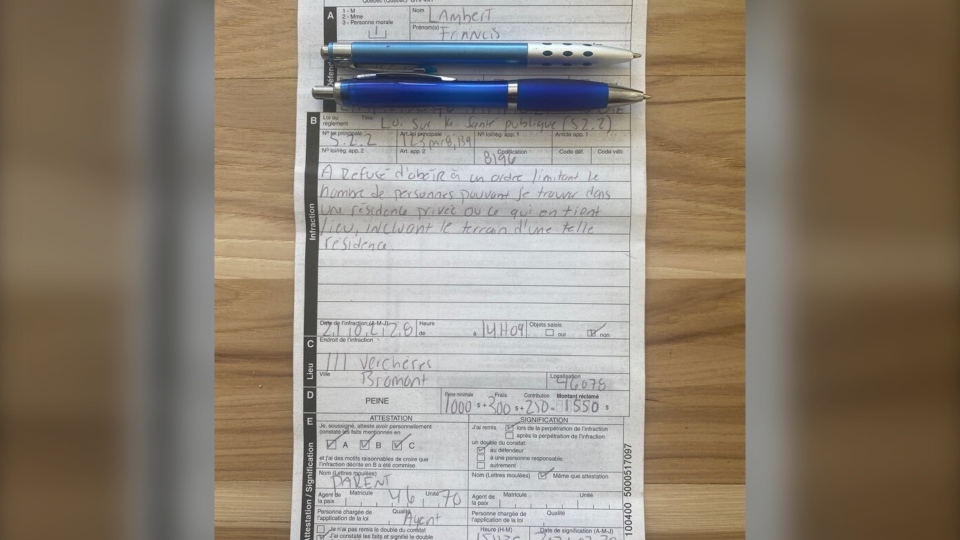 Lambert told CTV that the officers also said they didn't have the ability to give a warning rather than issuing the fines.

"He seemed a bit ill at ease with the fact that he didn't have a choice," he said.

It wasn't the only gathering Bromont police were called to over the past few days, according to the city of Bromont's director of communications, Catherine Page. She told CTV police were also called to a chalet where six adults and nine children from three different Montreal addresses had gathered on Saturday. They, too, were issued tickets totalling nearly $10,000.

Police were also called to an illegal indoor gathering on Friday and handed out two tickets for people who violated the curfew Thursday night.

"We are not in warning mode," Page said, when asked whether police would give out warnings instead of fines.

Lambert said the situation is frustrating for someone who's been careful to follow the public health rules, and who believes in their importance.

"I respect all the laws that are in force. Citizens must follow the rules," he said.

But the group considers Sunday's tickets illogical, with "no sense and no logic," and plans to contest them, he said.

"It's a law that rests only on the opinion of the premier," he said.

He added that if anyone is searching for who to blame for Quebec's terrible experience during COVID-19, they should look to the legislature.

The province's leaders are responsible for deciding not to require masks for young children at school, he said, for "failing to do the proper checks in [long-term care homes]," and other decisions that have helped spread the virus.

"We're always searching for guilty parties other than the government," Lambert said.