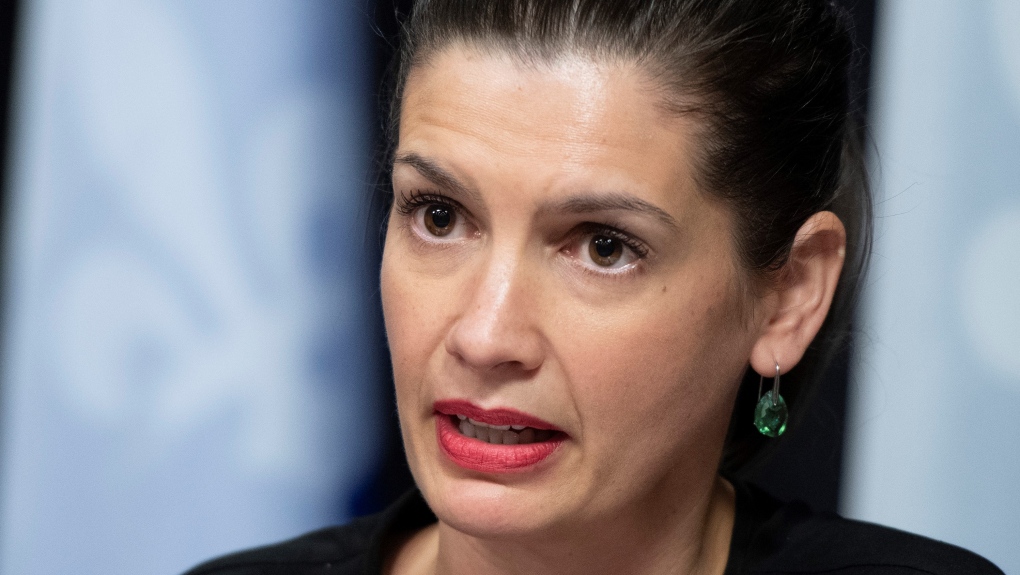 Quebec Public Security Minister Genevieve Guilbault says the province is putting its trust in the judgement of police officers to enforce the curfew. THE CANADIAN PRESS/Jacques Boissinot

MONTREAL -- Quebec is looking to Ottawa to better fight the scourge of sexual exploitation of minors and to increase penalties for pimps.

The reinforcement of the repression towards clients and pimps is part of the action plan against the sexual exploitation of minors made public Friday in a press conference by the Minister of Public Security, Geneviève Guilbault.

Based on the observation that too often pimps who turn teenage girls into sex slaves get off with light sentences, the Legault government would like to see a strengthening of the penalties provided for in the Criminal Code, which is the federal government's jurisdiction.

Minister Guilbault had her first meeting with her new federal counterpart, Marco Mendicino, and took the opportunity to make him aware of the importance of getting tough on pimps by making penalties more dissuasive, especially when it comes to sexual services involving underage girls.

"I gave him my little grocery list and sexual exploitation was first on the list," she told a press conference as she released her five-year, 37-measure action plan with a total budget of $150 million.

"I felt he was very open, very interested," she added.

Referring to the fact that Prime Minister Justin Trudeau's government is known to be on the centre-left of the political spectrum and not very repressive, Guilbault said she hoped he would make an exception when it comes to fighting the sexual exploitation of youth.

"I'll tell him that I think sexual exploitation, of all the offenses, could be one of those that a party that is not necessarily repressive could afford to be. You can be progressive, but at some point, pimping disgusts everyone, even people on the left," the minister said.

'BREAKING THE CYCLE OF SEXUAL EXPLOITATION'

Most of the measures contained in the action plan entitled "Briser le cycle de l'exploitation sexuelle" (Breaking the Cycle of Sexual Exploitation) had already been made public. Friday's press conference was to mark the occasion, one year to the day after the release of a comprehensive report on the issue, which contained 58 recommendations made by an all-party parliamentary commission.

At the time, the Legault government committed to making the fight against all forms of sexual exploitation of minors, the vast majority of whom are girls, a national priority and to taking action before the end of its mandate.

The report was produced by a group of 13 MNAs from all political parties who worked on the issue for 18 months. It concluded that the scourge of sexual exploitation of young girls, often runaway teenagers whose lives are ruined overnight by unscrupulous pimps who turn them into sex slaves, must be given the highest priority.

The report, which reviewed 63 briefs and heard from 67 witnesses, aimed to both intensify the crackdown on pimps and clients, while ensuring that young victims, some as young as 12 or 13, were better protected and informed.

Recommendation 28 of the report aimed to highlight the flaws in the judicial process, noting that the sentences imposed on pimps were far too lenient, particularly when the offender exploited several young girls. It called on the Quebec government to lobby Ottawa for the implementation of a provision allowing for consecutive sentences in cases involving the trafficking of persons under the age of 18.

"It can send a message of deterrence, we hope," said Liberal MNA Christine St-Pierre, who was part of the commission that studied this issue and who was keen on this recommendation. "The federal government needs to take responsibility for this issue, especially in terms of strengthening enforcement measures."

QUEBEC A HUB FOR SEXUAL EXPLOITATION OF YOUTH

In a transparent approach, the three opposition parties were present at the press conference.

Two-thirds of the funding ($100 million) for the action plan is for police and justice measures already announced in June. This includes the hiring of 77 additional resources for police teams dedicated to fighting this form of exploitation, more investigations into pimping and human trafficking networks, social network monitoring activities, more "client operations" deployed, the creation of an integrated team to fight the production and distribution of child pornography, as well as the hiring of additional resources for the Director of Criminal and Penal Prosecutions (DPCP).

The action plan also calls for action on other fronts: university research, an awareness campaign, prevention and support for young victims to help them rebuild their lives when they manage to escape the clutches of their pimps.

The trade in young girls, which is growing steadily in Quebec, is lucrative: it is estimated that each girl can earn up to $300,000 per year for her pimp. Reduced to a mere commodity, she herself often does not pocket a penny.

It has been shown that Quebec has become a hub for the sexual exploitation of youth in Canada.

According to the consultation document produced by the commission that produced the report, it was estimated that a man looking for sexual services from an underage teenager could find them in more than 600 establishments in Quebec, and especially in the metropolis, where there would be some 330 places linked to the sex industry: strip clubs, massage parlours and escort agencies.

This report by The Canadian Press was first published in French on Dec. 3, 2021.