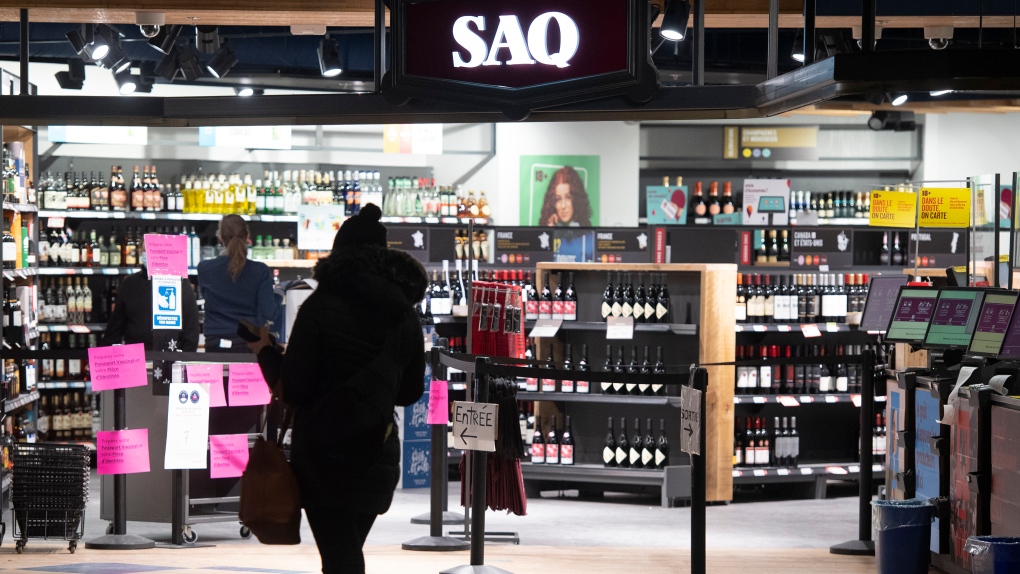 A woman walks by an SAQ outlet in Montreal, Tuesday, January 18, 2022. In an effort to curb the spread of COVID-19, vaccine passports will be mandatory to enter the SAQ and SQDC. THE CANADIAN PRESS/Graham Hughes

For the second time in just over six months, Quebec's liquor stores (SAQs) will see a price increase.

The increase will take effect next Sunday, May 22, for the vast majority of products, but on July 17 for 80 of them.

Among specialty products, mainly offered in the Espace Cellier, 1,328 will see a price increase of 3.3 per cent, while the prices of 157 others will decrease by 2.6 per cent next Sunday.

The SAQ reports that 182 other products will see their prices reduced by an average of 2.1 per cent, while 606 will remain stable.

Early last November, the SAQ announced that it would be raising prices by an average of 1.66 per cent on 1,332 products, most of them in the following days, although prices on about 50 of them were not raised until late last January.

In a news release published Monday, the provincially-owned company explained that due to the disruption of the global supply chain, an exceptional rise in shipping costs and increased production costs for suppliers, the new price adjustment is necessary.

The SAQ said that suppliers' production costs are related to shortages of bottles, corks and labels, as well as a shortage of labour.

In addition, unfavourable weather conditions in 2021 are still affecting product supply for some wine regions, according to the SAQ, with lower availability of some products and demand remaining strong. Three French regions have been particularly affected: Beaujolais, Burgundy and Loire.

Similar arguments were used by the SAQ last November to justify the price increase at that time.

The corporation also said that on April 1, the Government of Canada increased excise duty rates on alcoholic beverages. For wine, an increase of 2.4 per cent was applied, which is another factor that affected the price adjustment.

Crown counsel is seeking to revoke the prior order that granted bail for Tamara Lich, an organizer of the 'Freedom Convoy,' and says he will argue for her to be detained.

The gunman who attacked an Independence Day parade in suburban Chicago fired more than 70 rounds with an AR-15-style gun that killed at least six people, then evaded initial capture by dressing as a woman and blending into the fleeing crowd, police said Tuesday.

The Bank of Canada's strategy of rapidly increasing its key interest rate in an effort to tackle skyrocketing inflation will likely trigger a recession, a new study from the Canadian Centre for Policy Alternatives (CCPA) says.