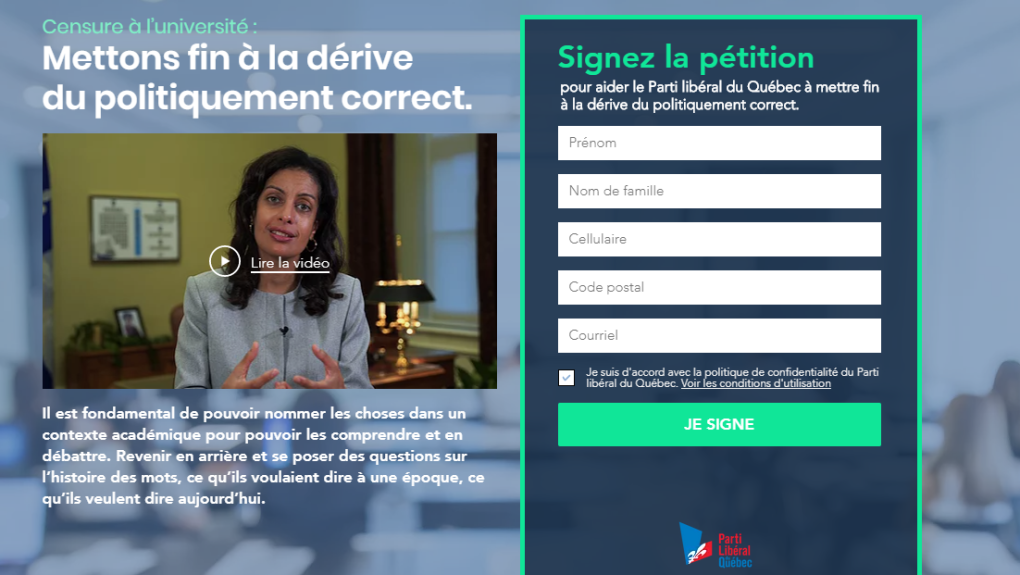 The Liberal Party of Quebec is circulating a petitions asking to put an end to the "political correctness drift" after the controversy surrounding a University of Ottawa professor's use of the n-word in an academic setting. SOURCE: PLQ

MONTREAL -- The Liberal Party of Quebec (PLQ) is circulating a petition to "put an end to the political correctness drift" after a whirlwind of controversy surrounding University of Ottawa part-time professor Verushka Lieutenant-Duval's use of a derogatory, racist term in class and subsequent suspension.

The petition reiterates party leader Dominique Anglade's position that the professor used the n-word in an academic setting to further understand its history.

Anglade has spoken in support of the professor (as has Premier Francois Legault), who apologized after a complaint was filed against her and invited students to further discuss the issue. Anglade, who is the first woman to lead the Liberal party and the first woman of colour to lead any provincial party, is the daughter of former Universite du Quebec a Montreal professor Georges Anglade.

Georges Anglade was born in Haiti where he was imprisoned for political reasons in 1974 and fled the country.

Dominique Anglade maintains that Lieutenant-Duval used the word as discussion and not with mal intent.

"We must not accept this drift, which prevents us from being able, in a university setting, to go back and ask ourselves questions about the history of words, what they meant at one time, what 'they mean today," Anglade wrote on Twitter.