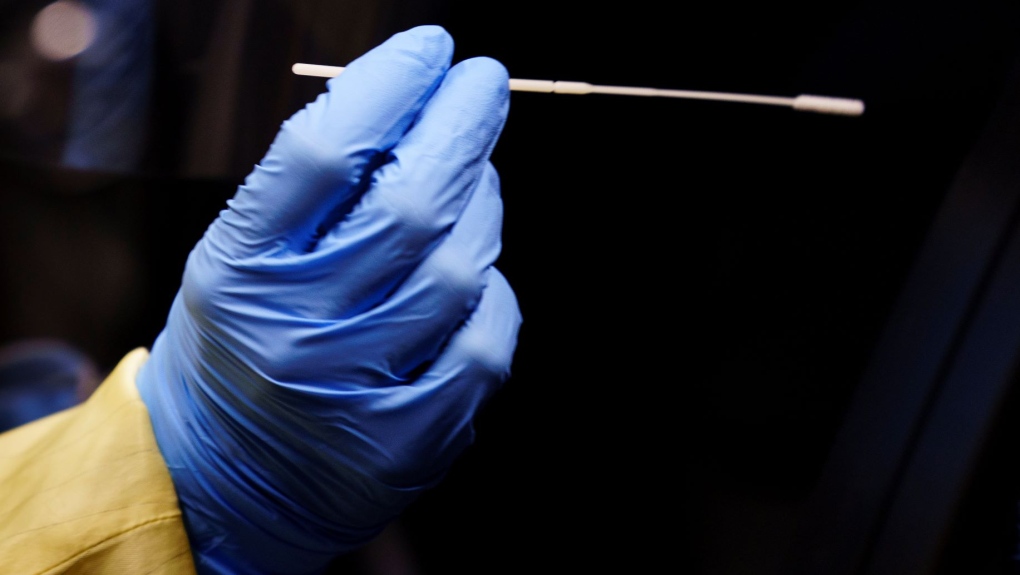 A nurse uses a swab to perform a test on a patient at a drive-in COVID-19 clinic in Montreal, on Wednesday, October 21, 2020. THE CANADIAN PRESS/Paul Chiasson

Quebec health-care staff got another surprise this week when they learned they can no longer get paid time off for COVID-19 isolation, but need to use up their sick days or vacation days while awaiting a test result.

The province already announced that some measures for staff would be ending along with the mask mandate on May 14, and specifically that COVID-19 bonus pay wouldn’t continue.

That alone sparked worries among workers and their unions, who say it will increase the existing exodus to the private system.

But the new isolation rule could have more dangerous implications, encouraging infectious workers to stay on the job, said Élise Pouliot, who works at Ste-Justine children’s hospital.

"We don't have more sick leave -- our reserves of sick leave are empty," said Pouliot, who is also president of the CSN union local for technicians and professionals at the hospital.

"There are some fears that people will stop getting tested and there will be more and more infection in workplace settings," she said.

The province hasn’t yet responded to a request for comment to explain the change and whether it also predicts bigger implications from it.

But the news caused ripples across Montreal’s health workers when it was handed down by their various employers over the course of the last week.

In the Nord-de-l’Ile health district, workers got the news on Tuesday, three days after the bonus pay ended.

"As you all know, the government has proceeded with retiring several measures linked to COVID-19 starting on May 14, 2022," the district’s administration wrote in an all-staff memo.

Staff have been paid under a certain administrative code, "IVP," when absent because they’re getting a COVID-19 test, isolating while they wait for the results, or when they’re in prolonged contact with someone with the virus.

But that code won’t keep being applied in all cases, as of Tuesday, the administration wrote.

It will still apply on the day of testing, if someone must miss work, they said. But after that, until results come back, leave must be paid through a sick day or vacation day.

The same is true if someone is in "continuous contact" with a COVID-infected person, such as a child, "where the person cannot isolate themselves."

People were encouraged to telework whenever possible, and were told they could possibly use banked time or make up the absence later through more work hours.

"We are aware that this is a major turning point in … our processes related to the management of the pandemic and that it will not be without impact for staff members," the administrators wrote.

"However, we are counting on your collaboration in order to respect the isolation instructions, for the protection of our users and your colleagues."

In other words, self-isolation is still mandatory while someone suspects they may have COVID-19, but if a person has no sick or vacation time remaining, their absence will be unpaid.

If someone actually contracts COVID-19 and has a positive test, their sick leave is currently covered by the CNESST, the workers’ health and safety board, explained Pouliot -- as long as they contracted the virus at work.

If they caught it at home, their sick leave must come out of their own sick days, she said. In cases where the source of infection is ambiguous, the CNESST covers it.

That means that, between children’s sicknesses and their own, sometimes happening repeatedly, most people have used up their sick time already, she said.

At Ste-Justine, in just the last five days since the bonuses ended, there’s already been an increase in mandatory overtime, she said.

Some people were doing huge amounts of overtime voluntarily, feeling it was worth it financially, even though they were "completely burnt out," Pouliot said.

With the incentives cancelled, they’ve taken a break, and the burden has passed to other people who never felt able to do that heavy schedule.

Pouliot predicted "a lot of absences" over the summer.

Last November, new data published by the province’s Order of Nurses showed that the number of nurses working in private agencies had increased by 19 per cent in the previous year.

That represented about 2,760 people, only a small number of Quebec’s overall nurses, but it was still the biggest increase in a decade.

That was before Omicron and six months before the pandemic bonuses were cancelled. The Order of Nurses hasn’t yet provided new numbers to show if the rate has increased since then.